Review | 'Honey Boy' is a captivating catharsis for Shia LaBeouf

How do you produce the best work of your career? Telling your own chaotic story and playing the role of your father. That's what Shia LaBeouf did in bravura fashion

Honesty is one of the hardest things to come by when a person is struggling to cope with their past mistakes and hardships.

It's easy to draft fictional ideas, unwieldy excuses, and ways to make it seem like it wasn't your fault. After all, part of being human is deflection of blame. It's a natural defense mechanism to say something isn't your fault. It's quite easy.

With his new film "Honey Boy," an autobiographical take on the relationship with his father as a young teenage actor, Shia LaBeouf forgoes any intention of turning off the road of blunt honesty. Instead, he delivers a raw and invigorating glimpse into the life of a kid who never got a real childhood, and suffered the repercussions of that loss of innocence.

It is LaBeouf's screenplay and portrayal of his father in Alma Har'el's film that powers the entire experience. This is the performance you've been waiting for from the tumultuous actor, and LaBeouf knocks it out of the park. He plays James Lort, a former magician and ex-con who now works for his young son Otis (Noah Jupe at 12 and Lucas Hedges at 22), mentoring him and simultaneously swinging a wrecking ball through his life. It's the epitome of tough love, where the older man is trying to steer the younger soul clear of the obstacles that have totaled his life, but the intent gets lost in the execution of said plan.

For the entire 90 minute film, it's James and Otis hanging out on sets and then in a hotel in between jobs and projects. The film jumps from LaBeouf and Jupe to Hedges a decade later struggling with the chaotic nurturing from his father, which has in turn led to more issues, addictions, problems, and of course, a stint or two in rehab.

Hedges is one of the most talented young actors right now, constantly taking parts that challenge his talent and build up his resume as a reliable leading man. Here, he takes more of a coverage-type supporting role, but one that fills in the blanks on the sheet that were left blank by Jupe's experience.

For young Noah, this is the second film of the fall season that sees him hold his own with a very good and older actor. He shined as Christian Bale's son in "Ford v Ferrari," and goes toe to toe with LaBeouf here as the younger version of the former "Transformers" star. The equity of the film's impact rests on the chemistry and working ability between Jupe and LaBeouf to create something magical together, and the actors succeed in a big way.

You'll judge James, feel sorry for Otis, but understand why things are the way they are in the end of the scene. You'll keep watching, knowing the virtue of the bond between a father and son.

Once again, LaBeouf pulls no punches here, and with Har'el's joyfully poetic direction, the flaws are lit up like Christmas trees for viewers to relate to. You'll find a piece of your own childhood angst in Otis' plight, and as a father, I could see many of the urges in James' version of parenting. You learn about the actor whom many have written off as shameful and problematic, but those same people never took the time to look behind the curtain and understand his rage.

You see, LaBeouf has been acting and working since he was a toddler. You could say to choose something else. but when you look up to your dad and that's the business, it's hard to say no. Via the unfiltered lens of a heroic filmmaker and a relentless script, we get to know Shia after all these years of wondering. 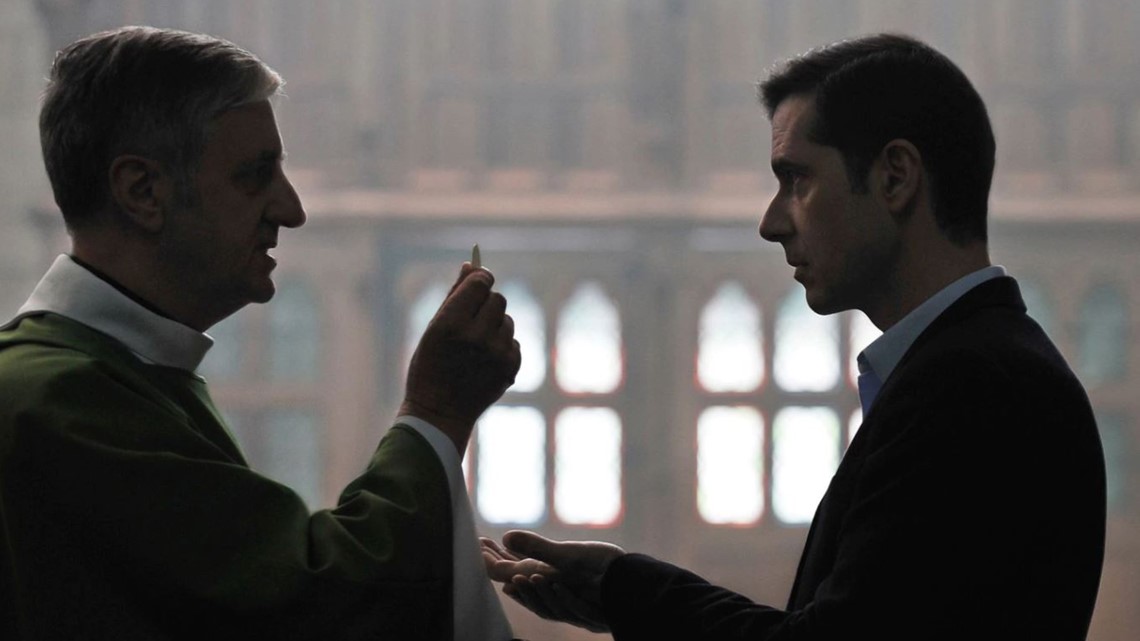 'By the Grace of God' Review | Francois Ozon's potent church justice drama packs a punch
How long can one stay quiet in the face of a torture that is both physically unbearable and mentally poisonous? For three Frenchmen in Francois Ozon's true-story tale "By the Grace of God," the threshold for pain hit a breaking point in 2014, culminating in an investigation into the French Catholic Church's sexual abuse of young boys.

As James, Shia gives a revelatory performance, one that heightens the rest of his work. It was a bold plunge to play your father, especially one that you had a hard relationship with. LaBeouf reportedly wrote the screenplay while in rehab, and that's documented in the film with Hedges. It was the open wounds that set the precipice for the film, but the subject had to be willing to go there for it to work and come off as convincing. Together with this year's superb "The Peanut Butter Falcon," LaBeouf has packed a potent one-two punch.

The result is noble work all around. Everyone shines here. This a small film with a big heart of truth. A cinematic experience that endears one to the power of a father-son relationship. Thanks to LaBeouf, a game combo of young actors and Har'el leaning into the establishment, "Honey Boy" is a raw, emotional and fascinating glimpse into a life many of us can only imagine. Living up to our parent's hopes and dreams can be a harrowing journey, especially if you stay on it.

One never wants to admit they get a kick out another person's misery, but in the world of film, drama can make for good theater. LaBeouf's life was stuffed with drama, but it's handled with care here.

Yes, if you are wondering, there is a hilarious ode to his "Transformers" days. Look for it and enjoy it.

Alma Har'el's film hits hardest in the end, saving its largest emotional gut punch for the final ten minutes. A period of scenes that span a decade but give off a feeling of euphoria for sticking around. It's the tightest 90-minute film you'll find this year, autobiographical in the most blunt sense. By pulling zero punches with his story, LaBeouf crafts a grand tale that should hold up.

Go see "Honey Boy," a film that hurts, connects and touches the heart all at once.

RELATED: Things you need to know before you see 'Frozen 2'

RELATED: Review | 'The Irishman' is a towering achievement for Martin Scorsese

RELATED: Review | 'A Beautiful Day in the Neighborhood' is an engrossing reminder of Fred Rogers' virtue

Actress Annie Wersching dies at 45, remembered by many