The 68-year-old Northern Ireland native can fight the bad guys in his sleep. More tender-hearted roles like the one in "Made in Italy" are more fitting these days.

ST. LOUIS — Once upon a time... before he was the world's foremost weary action hero... Liam Neeson was an Academy Award-nominated actor.

2020 just happens to be the year Neeson found his way back to the far more dramatic side of the thespian playground, opting for roles where he didn't throw a punch or shoot a gun at a bad guy. Instead, he was Tom in "Ordinary Love," a husband who provided cynical grace for his wife, Joan's (Lesley Manville), battle with breast cancer. In this month's "Made in Italy," Neeson portrays the charming yet complicated Robert, who reconnects with his estranged son, Jack (portrayed by real life son, Micheal Richardson), to restore their late wife/mom's home in Italy while slowly dealing with their own demons. The plot mirrored the unfortunate reality of the two men's real life predicament: Neeson's wife, Natasha, tragically died days after a skiing accident in 2009. Neeson seems to be channeling that again.

Each new role had a comforting yet distinct vibe and makeup. Tom is someone who looks at the glass half-full, but tries to adjust that way of thinking when his wife becomes ill. Robert is a Bohemian artist who can woo just about any woman, but a tragic past is his Achilles heel. The violence is on the inside of these two men, nestling up against their soul instead of sitting on their knuckles; there's nothing deadly about their external lives. Each role is potently played by Neeson, and both couldn't be further from his more familiar action heroes.

Don't get me wrong. I loved the fact that Neeson broke into the action world after the death of his wife, Natasha, finding an utter escape from the real life horrors that were thrust into his life. He was being the hero that real life doesn't allow a human being to be. That's why every single action role he took carried conviction. You recognized the fact that this actor had dealt with serious loss before the role ever found him.

When his daughter went missing in "Taken" or he had to protect his son for 12 hours in "Run All Night," there was no doubt in Neeson's moves. You just bought into it. Occasionally, he blended the two personas-working man's action hero and more of a thinking man's drama-on the big screen. "Rob Roy" and "Next of Kin" were a couple of teases of this back in the day.

No role, not even the latest one with Micheal this summer, seemed more personal than Joe Carnahan's "The Grey." A phenomenal human drama disguised as an action thriller, Carnahan's film placed Neeson's morally wounded Ottway as a guy on the edge, contemplating suicide in the opening moments of the film. A sniper for an oil rig company, he is forced to lead a group of strangers to survival after a plane crash, protecing them from wolves and themselves. What we don't know in the beginning and find out in the thrilling end is that Ottway had lost his wife to illness before the film's story took place. He was ready to take his own life, and finds a new will to live in these men from multiple worlds that are both unknown and oddly familiar to him.

I think this is what the action hero role did for Neeson. He's spoken openly about his late wife and how he misses her and thinks of her all the time. While his children kept him going, I think this career resurgence gave him that second wind and new life again. Before 2008's "Taken," Neeson hadn't really scored in a film since Christopher Nolan's "Batman Begins." Since that hit film about a retired special forces dad who goes looking for his daughter in France, Neeson has starred in 16 different action roles.

2020 has spun a different tale. While there is a crime thriller coming out later this year called "The Honest Thief," the film does present an intriguing scenario where Neeson's criminal wants to come clean, but finds corruption at every turn. Next year's "The Marksman" presents Neeson as a rancher protecting a young boy from harmful men. In "The Ice Road" though, Neeson plays an ice driver who leads an improbable rescue of trapped mine workers under frozen ice. While the action roles will never cease to arrive for Neeson, I am glad he is finding new ways to take on tougher roles.

When I say tough, I'm not commenting on the hardened knees of the 68-year-old Northern Ireland native. Tougher roles that require some digging is what I'm talking about. I like seeing him play more realistic men like Tom and Robert. He can do "the lifesaver with a gun" work in his sleep, but the kind hearted yet sharp-witted family man is a fine return to grace for Neeson.

He's always been a pro in my book. Someone who can qualify for Oscars, save the day, warm your heart, scare you a little, make you laugh, and even poke fun at himself ("Ted 2"). Neeson is a rarity. I am simply glad he's mixing it up again.

"Made in Italy" and "Ordinary Love" are both available on Amazon Prime. 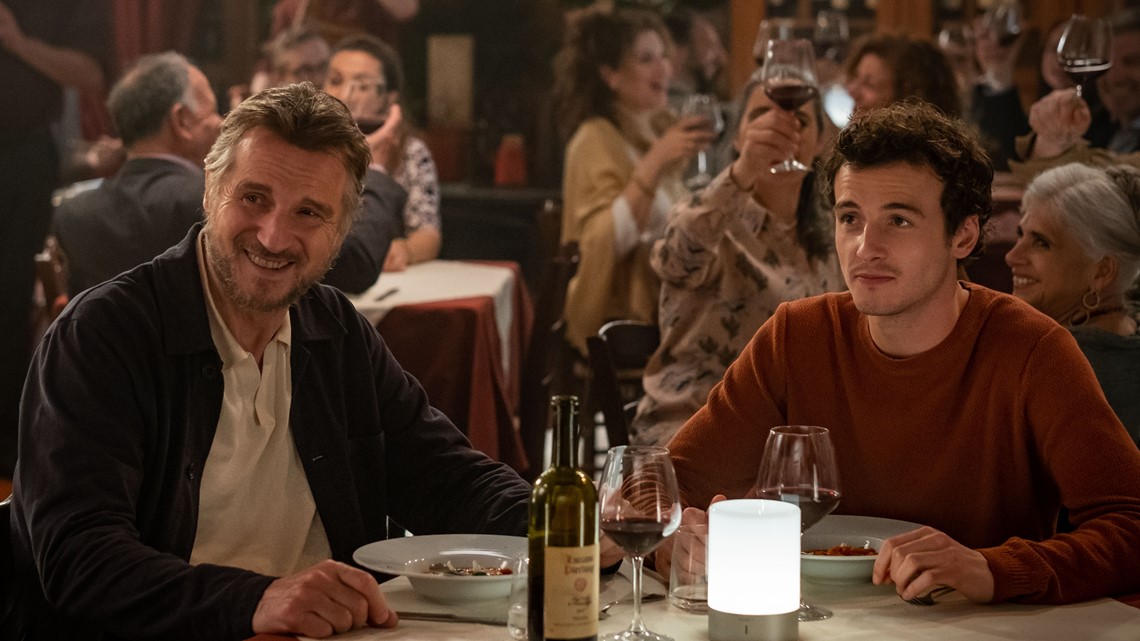 'Made in Italy' Review | Liam Neeson and Micheal Richardson lend heartfelt conviction to familiar family drama
In a heartfelt case of art imitating life, Neeson and Richardson (real life father/son) battle a tragic past in the lovely Tuscan hills to find a peaceful future. ST. LOUIS - Jack (Micheal Richardson) has a dilemma. He desperately needs to sell his dead mother's villa, located in the luscious countryside of Italy, so he can save his art gallery back home.

'Gaslighting' is Merriam-Webster's 2022 word of the year