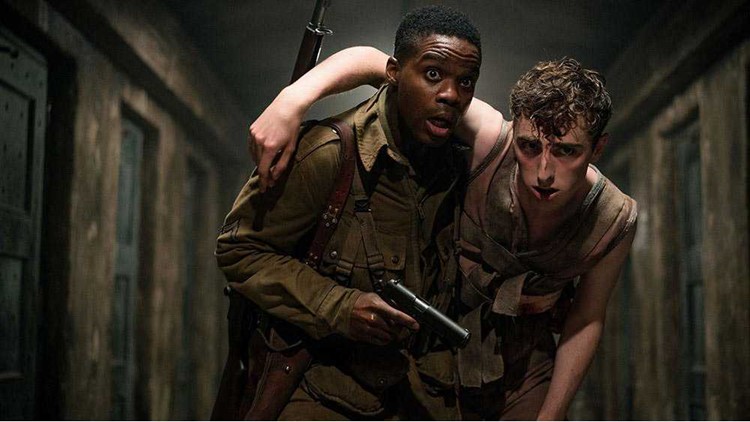 Movie trailers have a simple task: give moviegoers a tease of the film without giving away too much of the plot's third act. Make someone turn to the person, stranger or friend in the seat, afterwards with a wide-eyed smile of glee. Many fail, some succeed, and others create two minutes that ends up looking better than the actual movie.

Overlord is exactly what the preview for the film promised: a blood drunk rendition on World War II where American soldiers run into more than just angry Germans on the grounds of Normandy, France. In June 1944, Allied troops thought they had their hands full with German forces, but screenwriter Billy Ray has other plans.

The U.S. unfortunate souls are aided by Chloe (Mathilde Ollivier), the kind of woman in this genre that isn't as trustworthy as the length you could throw her. She leads the men to some kind of salvation, and thankfully, a hallway where several gun battles, fist fights, and endless blood spilling occurs.

Look, Overlord is a two-hour comic book. The action doesn't let up, the script exists mostly for the Americans to argue with each other and crack a few light jokes before avoiding slaughter, and the story provides just enough grease to cook a hot meal at this cinematic diner. There's nothing mind-blowing happening here or an entry that will challenge the great World War II films of all time. This is like the time where a director made a spinoff tale of Abraham Lincoln's legend and had him fighting vampires.

That film was a kick in the head and so is Julius Avery's film, which means it does the job and fulfills on the hype produced by the trailer. Nothing more or less. Russell has a few good action hero moments as the guy you can count on to take all the risk and shoot first, and Adepo does a good "I don't want to be here, but I will be a hero by the end" routine. The actor who truly leaves a mark is Asbaek, having a whole lot of fun playing a mighty German with powers that begin and end with doom.

I'd be lying if I didn't say the first 20 minutes of the movie are the best. The helicopter crash teased in the trailer is a mesmerizing sequence. Equal parts luscious fantasy, CGI madness, and wickedly edited action, the German attack on the American airforce is a thrilling spectacle that could net the film a visual effects and/or sound mixing Oscar nomination. In a bittersweet way, it's all downhill from there.

After about an hour, the action does get redundant and starts to wear you down, but that's why movie theaters serve alcohol now. You get out of your seat, stretch your legs, grab another beer, tip the bartender well, and settle back in for more zombie battles for the sake of our country 74 years ago. Before you know it, the end will come, and you will feel like the transportation device has finally come to a stop.

If Overlord, which was produced by J.J. Abrams, does one thing well, it spins a different take on a subject matter, World War II, that Hollywood has delivered a hundred variations on. You haven't seen this before, which gives the film and its relentless action an edge in some ways. It's a wild pulpy ride.

Overall, I enjoyed Overlord, even if I saw the limitations and overload of its action and excess become clearer as hour #2 unfolded.

Just do yourself a favor if you are on the fence. Go to YouTube, watch the trailer (which got bonus points for using AC/DC's "Hells Bells"), and see if that interests you. Believe me, the reaction will be one-sided and unanimous.

Movie trailers can be just right or too much in asking you if this would be something you'd be interested in. Overlord fulfilled the promise of the trailer, producing an entertaining World War II film without one big star attached and a new director at the helm. I think that's impressive, don't you?