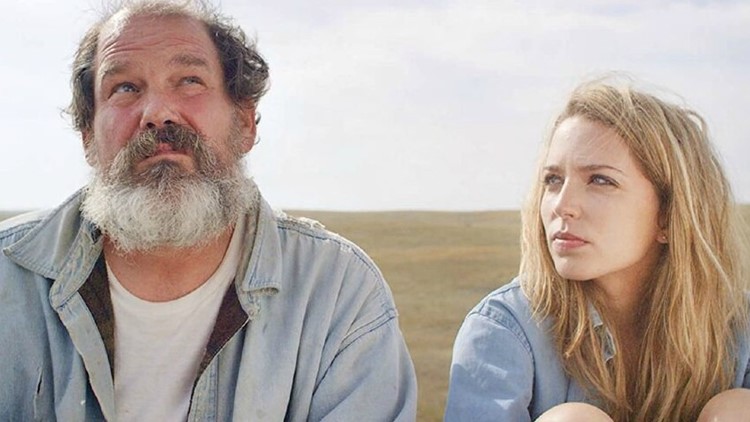 'Tater Tot & Patton' is a beautifully rigid indie with charm

Andie (Jessica Rothe) and Erwin (Bates Wilder) don't know it yet, but they have one thing in common: each have been broken into pieces by a single event. The unlikely pair, a rebellious niece and her drunken uncle, are the epicenter of Andrew Kightlinger's beautifully rigid indie, Tater Tot & Patton.

Erwin loves beer a little too much. He drinks his breakfast and washes it down at lunch with more drinking, which will be capped off at sundown by more beer consumption. He's a country love song: sad, grief-stricken, and completely detached from life. Tending to the line of wire fencing that keeps livestock in place serves as Erwin's clock, but it's the booze that owns the pink slip on his soul.

Here's the thing. It's not just drinking for the sake of lager love. Erwin swallowed grief whole a while ago and his chest won't stop hurting because of it. He's treating alcohol like gasoline and drenching his depression with it, only to see it grow bigger every day.

He's on the Leaving Las Vegas freeway when Andie shows up to disturb everything, harboring her own problems inside one extremely heavy suitcase and series of long stares. Her digital ways quickly drain Erwin's analog design, and the usual roadblocks are set up. She doesn't like sausage and beans every night, and he doesn't like her need for Wifi.

Watching the ice thaw between these two is just one of the many treats of Kightlinger's quietly potent screenplay, which serves the actors with material that allows them to stretch instead of contort.

Rothe made the unique horror film, Happy Death Day, a raw treat and perked up La La Land in a few scenes, but Andie gives her some room to gallop. It isn't the usual teenage wasteland youth with no direction. There's bones in her body that she hasn't used yet, but Erwin is there to give her a road map in order to find them. Rothe doesn't overplay the material, instead singing the tune the way Kightlinger wrote it up in his head. She is impressive here, but the real treat here is Wilder.

You may have seen his face pop up in films such as David O. Russell's Joy or Showtime's Brotherhood, but Erwin gives the actor a steak that he may never seen again. Here is a guy who gives you the impression of simplicity from the very second you lay eyes on him, but there's something there eating at him. The impressive part about his work is how well he does without a lot of dialogue. Erwin isn't exactly a how-to guide of self-destruction, but he wears it all over his unshaven face and grizzly composure.

Instead of merely playing it, Wilder climbs into the dread and lets the part consume him. Actors are at their best when they enter the lost and found area of performance. You have to give it all up to get there, and Wilder goes all the way. It's the kind of performance that hits you in the side of the head and makes you look the actor up and wonder where he has been and how he drove his career head-on into this part. I found myself rewinding several parts just to see Wilder play it again. He's a natural and a maverick at the same time. The actor is a regular in Kightlinger's films, and you can tell, because the camera seems to know Wilder well.

I liked the way that Kightlinger took the deck of grief, heartbreak, and despair-and decided to deal the cards a little differently around the table. While there's warmth throughout the movie and the minimalist yet moving score by Garth Stevenson strikes a chord, the characters don't get off Scott free in this flick. It isn't like one scene features a huge fight that culminates in a hug. Kightlinger wisely cuts away from scenes before a bow can be tied on. There's one hug in the film and it's earned.

Tater Tot & Patton seems like the kind of 1,000 cuts independent film that took a village to make. Hollywood doesn't know what to do with these films, because there's no stock to push-only impeccable performances, easy-going writing, and a moral that doesn't please without punching you first. There's a reason this film won the Best Narrative Award at the Beloit International Film Festival: it's blunt honest and makes you feel a few things.

At one point in this film, Andie realizes something about Erwin, and it happens with ten words of dialogue or less between the actors. Other scripts and players would have hammed it up and forgotten the oldest trick in the book. When it comes to genuine emotion on film, less is always more.

Thanks Kightlinger, Wilder, and Rothe for producing something ruthlessly rigid. You try bending Tater Tot & Patton, and you may get bit by a rattlesnake.

*The film had a limited release on June 7, 2017, has appeared at a couple festivals, and is awaiting further distribution. It needs your love!