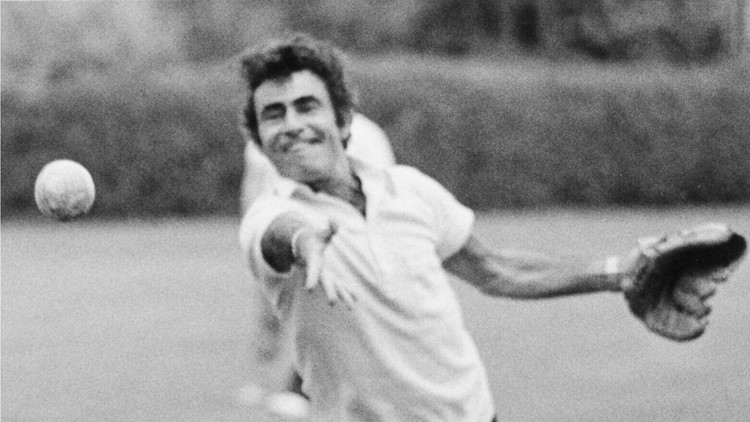 Photo by: AP
This 1973 family photo provided by Anne Serling shows her father, television writer Rod Serling tossing a softball at a school his daughter attended, in Massachusetts. Years before he journeyed to "The Twilight Zone," Rod Serling made a brief detour to the strike zone, writing a comedy about baseball. (Courtesy of Anne Serling via AP)

Instead of Cards vs. Reds, long-lost Rod Serling baseball comedy is on deck

Years before he journeyed to "The Twilight Zone," Rod Serling made a brief detour to the strike zone.

To many, he's the foreboding figure in black and white who gave the world the heebie-jeebies with those bizarre, mind-bending tales of cannibal aliens, talking dolls and phone calls from the grave.

Smoldering cigarette in hand, he unleashed macabre mayhem in a classic TV show that resonates decades later in endless reruns.

But, there was another dimension to Rod Serling: His love of baseball.

And Serling aficionados and sports fans will soon get a chance to experience it. Think there's no baseball on the radio? Think again.

"O'Toole From Moscow," a long-lost comedy Serling wrote about the national pastime, is on deck.

It's a screwball romp, with a side of whimsy: At the height of the Cold War in the 1950s, a Soviet Embassy worker fritters away time rooting for the Brooklyn Dodgers at Ebbets Field, then skips town with a comrade who suddenly becomes the greatest slugger ever for the Cincinnati Reds.

Serling's 1955 script, which was performed only once, is being brought to life in Cincinnati. A public radio station there will air it March 25, which originally was the eve of the opening day matchup between the host Reds and the St. Louis Cardinals, before the coronavirus prompted MLB postponements.

"Kind of a gift from my dad back in time," Anne said. "There is a magical quality to it, isn't there?"

"It's his voice," she said from her home in Ithaca, New York. "I could so much imagine my dad writing this."

"There's a line in there: 'Give me a stick and I'll beat it to death.' That's an expression he used all the time," she said. "There's so much of my dad in this. I can envision his words throughout this."

Hers, too. Anne is the narrator and introduces the program, as the stage directions called for, "in clipped Rod Serling style."

The hour-long show is peppered with references to brawny Reds slugger Ted Kluszewski, Stan Musial, Willie Mays, Duke Snider and other stars of the day and begins at 8 p.m. Wednesday on WVXU-FM 91.7, with live streaming at wvxu.org.

A twi-nighter, of sorts. OK, but why Cincinnati?

From 1950-54, Serling worked there for WLW, typing out promos, ads and other fixtures. At night, though, he wrote freelance scripts for local and national TV shows.

"O'Toole From Moscow" was televised live by "NBC Matinee Theater" on the afternoon of Dec. 12, 1955, during the days of the Red Scare.

There are no known tapes or recordings of that show, which aired four years before Serling created "The Twilight Zone."

That's where John Kiesewetter got involved. The Serling fan, longtime Cincinnati Enquirer newspaperman and current Media Beat blogger for WXVU first heard about the show in 1989 and was intrigued. He eventually tracked down the script and oversaw a project to adapt it for radio.

"Not many people can say they spent a summer rewriting Rod Serling," he kidded.

Kiesewetter lined up the University of Cincinnati College-Conservatory of Music to provide actors, guided by CCM professor of acting and directing Richard Hess, and recorded the show in November.

Reds organist John Schutte was brought over from Great American Ball Park to play "Take Me Out to the Ball Game," other stadium background and even a little Russian folk music. But none of those eerie echoes from "The Twilight Zone" theme.

Kiesewetter also went to a local gym where a couple guys hit with wood bats, recording the loud cracks with his phone to set the scene.

"The ball sounds like it's exploding," he said. "Great sound effect."

For Anne Serling, such sounds bring back fond memories of driving around the Los Angeles freeways with her dad, listening to a ballgame.

"He loved the Dodgers, hearing Vin Scully on the radio. I can recall him being quite enraged, slapping his palm against the wheel when things didn't go right for them."

Carl Erskine pitched for the Dodgers back then, starting in 1948 with Brooklyn. Now 93, the All-Star is prominently mentioned in this version of Serling's comedy.

"Now that's a real script. That's amazing," Erskine said from his home in Anderson, Indiana. "I liked 'The Twilight Zone' and I remember the music that played behind it. Nice to hear I'm in this one."

A postscript, submitted for your approval:

Why Serling picked the name "O'Toole" remains a mystery. It certainly wasn't common in sports. Until Serling's script, there had been exactly one O'Toole in the majors -- Marty, a pitcher who debuted in 1908 with (naturally) the Reds and stuck around the bigs for a bit.

Some older fans might note that a few years after "O'Toole from Moscow" ran, a young lefty came out of college and showed up in Cincinnati. Jim O'Toole was pretty good, pitching Cincinnati into the 1961 World Series.

But try to explain this: Serling wrote only one baseball-themed episode of "The Twilight Zone," about a robot pitcher titled "The Mighty Casey." It ran in 1960 and starred Robert Sorrells as the unusual moundsman.

Sorrells, sadly, drew attention later in life. At 74, he shot and killed a man in a Southern California bar and died in prison years later.

News reports of the case listed Sorrells' acting credits, but mostly skipped his work in a long-forgotten TV comedy from the early 1960s with a Navy backdrop.

Coincidence? Could be. Or maybe just cue the "Twilight Zone" music and let that Serling touch slip into the shadows, too.

RELATED: United through soccer and injuries