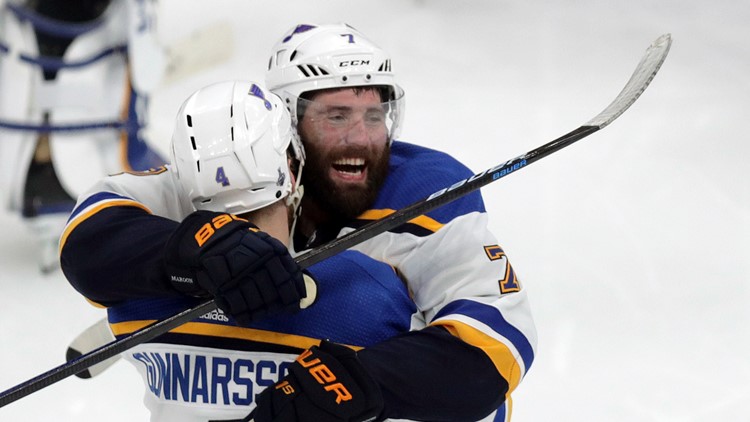 Photo by: AP
St. Louis Blues' Carl Gunnarsson (4), of Sweden, is congratulated by Pat Maroon, rear, after he scored the winning goal against the Boston Bruins during the first overtime period in Game 2 of the NHL hockey Stanley Cup Final, Wednesday, May 29, 2019, in Boston. (AP Photo/Charles Krupa)

ST. LOUIS — My favorite News Director in 5 On Your Side history is a man by the name of Mike Shipley.

One day he asked me if I would like to make the transition to be a morning news anchor.

I never wanted to say no to Mike about anything. So I tried it for three weeks and was average at it. My heart wasn’t in it either.

I went into Mike’s office and said: "Mike, I got into the business to cover sports, and that is all I really want to do."

Thirteen days later, I was covering the game that the Blues swept the Blackhawks. Chicago goaltender Ed Belfour went nuts and broke his stick. The roof almost came off the Old Barn. My colleague Trey Wingo said something like, "it’s not always this great." I have said the same thing lately to our new sportscaster, Ahmad Hicks.

If and when the Blues win this thing, it will be the greatest story I have ever covered.

Nothing will replace the Cardinals, but they have won five times in my lifetime.

The 1999 Rams were an awesome story. But it’s kind of like looking at wedding photos of the spouse who cheated on you and left you. It was a nice game, but too many issues afterward to fully embrace it.

I grew up watching Red Berenson’s scoring goals, seeing Bobby Plager’s hip-check and listening to Dan Kelly’s iconic broadcasts. I used to walk every day to school up Lindbergh to Our Lady of the Pillar. Every time we would see one of the Blues Barracuda team cars, we would yell with excitement. When we were fortunate enough to go to games, it was such an event. The organ music, men in dark suits and women in pretty dresses with beehive haircuts.

When I had to leave town to pay my dues in my first broadcasting jobs, I didn’t get to watch as much hockey as I would have liked. Then when I got back, I went to as many skates as a beat writer for about 10 years.

One time, he told me to go tell Mike Keenan that he was here before he got here and he will be here when he’s gone. Brett was right.

Chris Pronger was always edgy and interesting. Al MacInnis was like Stan Musial -- thoughtful and elegant. Kelly Chase and Keith Tkachuk were always funny. Hockey players without a doubt are the best to interview. Many are from humble roots and they have a real sense of appreciation.

Unfortunately, the Blues were cursed in the post-season.

Usually, it was goal-tending related. If it wasn’t Grant Fuhr’s knee being destroyed, then it was Roman Turek’s confidence being shattered or Jon Casey letting in an easy goal by Steve Yzerman.

Then in January, he showed up.

RELATED: Opinion | How the Blues are crafting a comeback story for the ages

RELATED: Binnington has only gotten better as series have gone along

Jordan Binnington is the Kurt Warner version of the Blues. Way down on the depth chart and getting a late start to his career and then becoming an instant star. Like Warner, he is at his best at the most important times. He is undefeated in clinching games and has given up four goals in those three games.

So here we are, after 4,046 regular season games, 389 playoff games and now just one game away from hoisting the Cup.

This is not just a series to win a championship for a team. This is for the whole city and the alumni base. Think about Plager, Unger, Federko and Chase.

I am sure glad I get the chance to cover this. I think I made the right decision.

RELATED: The Cup is in St. Louis