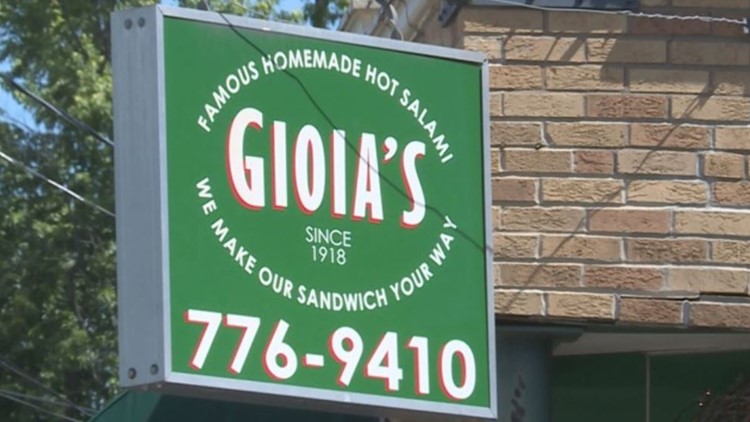 There will also be a hot salami eating contest with seven contestants willing to take on seven hot salami sandwiches in seven minutes.
Author: Ashley Cole
Published: 3:49 PM CDT May 20, 2019
Updated: 10:37 AM CDT May 21, 2019

ST. LOUIS – One of St. Louis’ favorite delis is celebrating its 101-year anniversary on May 23.

Gioia’s Deli opened at the corner of Macklind and Daggett on the Hill in 1918.

In honor of their anniversary, Gioia’s is offering a promotion for $5 Hot Salami sandwiches all day at the Hill location – 1934 Macklind Avenue. The promotion is for walk in customers only and there is a limit of one sandwich per customer.

Along with all day $5 Hot Salamis - Gioia’s will be giving out a few limited edition items to the customers at the Hill Location. New Hot Salami Camo Hats will be given out to the first 101 customers, while Gioia’s Deli window decals will be given away to everyone until supplies run out.

Gioia’s Deli on the Hill will be staying open late to continue the celebration. From 4 p.m. to 8 p.m., there will be live music by Rocky’s Ransom, beer and wine and entertainment outside. Saint Ambrose Forever will be selling beers and wine will be available from Gian Tony’s. There will be face painting and other fun for the kids.

There will also be a hot salami eating contest with seven contestants willing to take on seven hot salami sandwiches in seven minutes.

WANT MORE STORIES LIKE THIS? Here's What's Cookin' in the Lou

The contestant who eats the most in that time will receive a trophy and their name will be added to a plaque on Gioia’s Wall. After the competition, there will be cake from the Missouri Baking Company available for everyone to enjoy.

Gioia will also launch it’s ‘summer nights’ on the night of the anniversary party. On the third Thursday of May, June and July - Gioia’s original location will be open from 10 a.m. to 8 p.m. Each of these Thursdays will feature a beer vendor and local musician and will benefit a local charity.