According to the CDC's data, only seven Missouri counties have an alert status lower than red 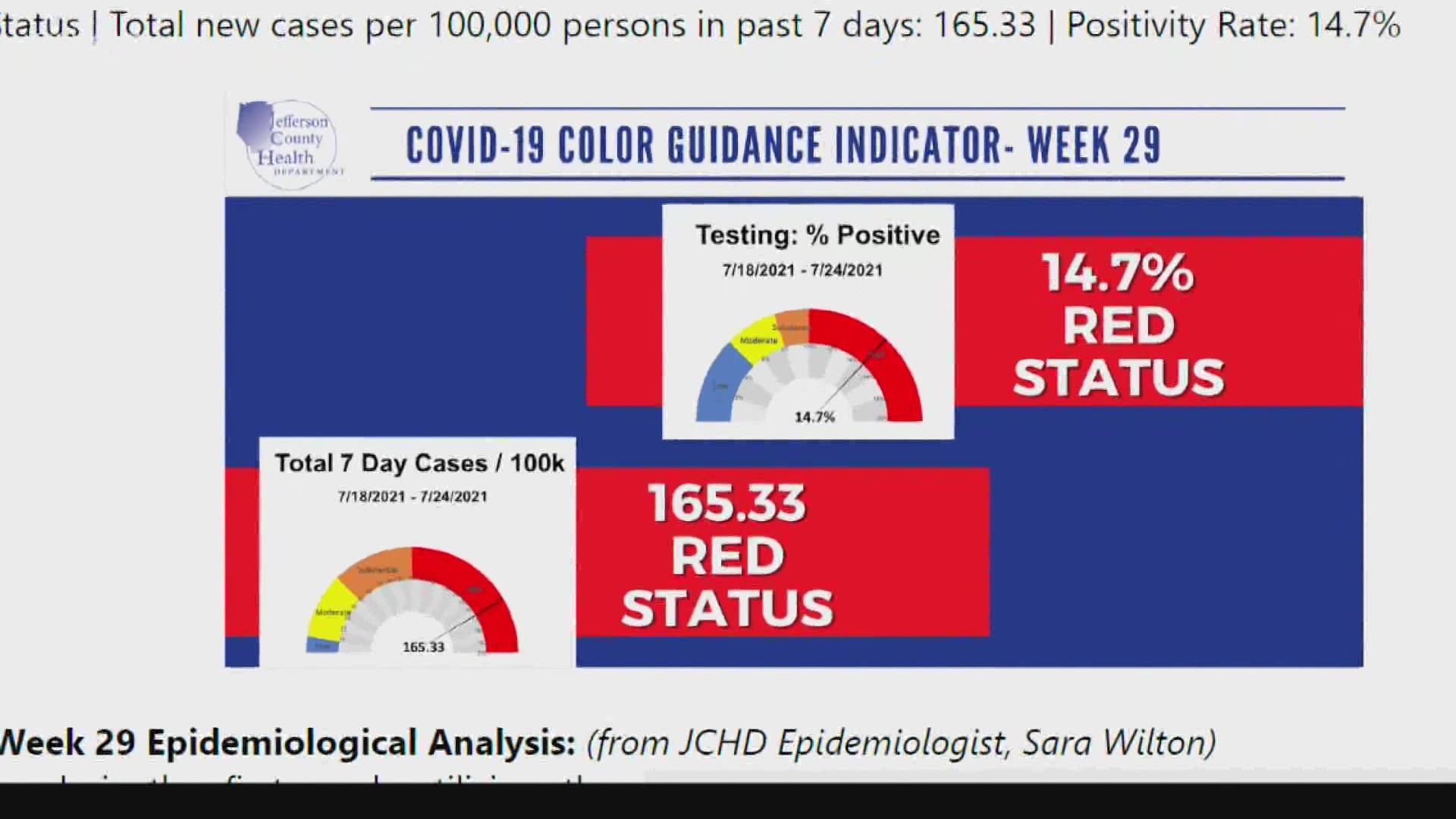 In a press release, the Jefferson County Health Department said the county surpassed the thresholds for new cases and positivity rate to put the county from 'light red' status to 'red' status. Red status indicates high community transmission of the virus throughout the county.

The seven-day positivity rate also increased this week, from 11.4% to 14.7%. The CDC's red status threshold is 10%. This week's positivity rate is the highest the county has seen since January.

The news came as no surprise to some in Jefferson County.

“It doesn’t surprise me that we’re back in the red zone," said Brandon Birge, an Arnold resident. "A lot of people go out without wearing masks. If we want to beat this thing, it’s going to have to happen gradually honestly, but the first step is to get vaccinated.”

This is the first time Jefferson County has entered the red status since vaccines became widely available, and the health department said their data shows the vaccine is effective at slowing the spread of COVID-19. Of the 69,997 residents that have been fully vaccinated, 46 of them have experienced a breakthrough case of COVID-19. That amounts to .07% of all vaccinated people in the county.

Of those 46 breakthrough cases, four of them resulted in hospitalizations and three of them were asymptomatic.

The health department said the youngest residents, who also have the lowest vaccination rates, saw the largest percentage increase in cases this week. Children under the age of 10 — who can't get vaccinated — and residents age 10-19 — who have a vaccination rate of 13.96% — each saw a significant increase in cases this week, according to the health department.

"Our 0–9-year-olds have not been vaccinated against COVID-19 because it is not yet authorized for that age group, which is all the more reason to be taking additional prevention measures to protect them," epidemiologist Sara Wilton said in the press release. "Delta variant has been shown to be 2x more infectious than the original strain of COVID-19 and has a higher chance of infecting children."

The health department said 31.1% of people in the county are fully vaccinated. The state average is 41.0% and the national average is 49.3%.

“We just want folks to know that if you’re eligible to be vaccinated, we highly encourage that especially with the delta variant emerging and clearly spreading throughout the state," said Brianne Zwinner, the Spokesperson for the Jefferson County Health Department. "Also, continuing prevention measures, which include wearing a mask is important. Regardless of whether or not you’re vaccinated, you need to be wearing a mask in areas of high transmission.”

On Tuesday, the CDC announced new mask guidance, advising vaccinated and unvaccinated residents wear masks in indoor settings in regions that are seeing a high or significant level of community transmission. All but three counties in Missouri, and every county in the Metro East fall into the two categories where masks are indoor masking is advised for everyone.

Jefferson County had a mask mandate from the end of November until the end of March, and according to the Health Department, it worked.

With positivity rates continuing to rise 5 On Your Side on Tuesday asked if they're considering another mask mandate.

"As far as a mask mandate or mask order no, there's no talk of that,” said Jefferson Co. Health Dept. spokeswoman Brianne Zwiener said Tuesday. “We do agree that people should be wearing masks. We encourage folks to follow the CDC guidance for a mask especially if you're not vaccinated."

According to Zwiener, roughly 30% of people in the county are fully vaccinated, but they’re seeing fewer than 50 people per week who want the shot.

"We are concerned that our vaccination rate isn't high, especially with an increase in cases,” said Zwiener.

That’s why Zwiener is asking people to take steps to protect themselves and stop the spread.

"It's all about the different layers of prevention: vaccination, masks, handwashing, physical distancing, and staying home if you're sick,” said Zwiener. “The more of those we can put into place the better chance we have."