Eight of the new cases were found in children 5-years-old and under. 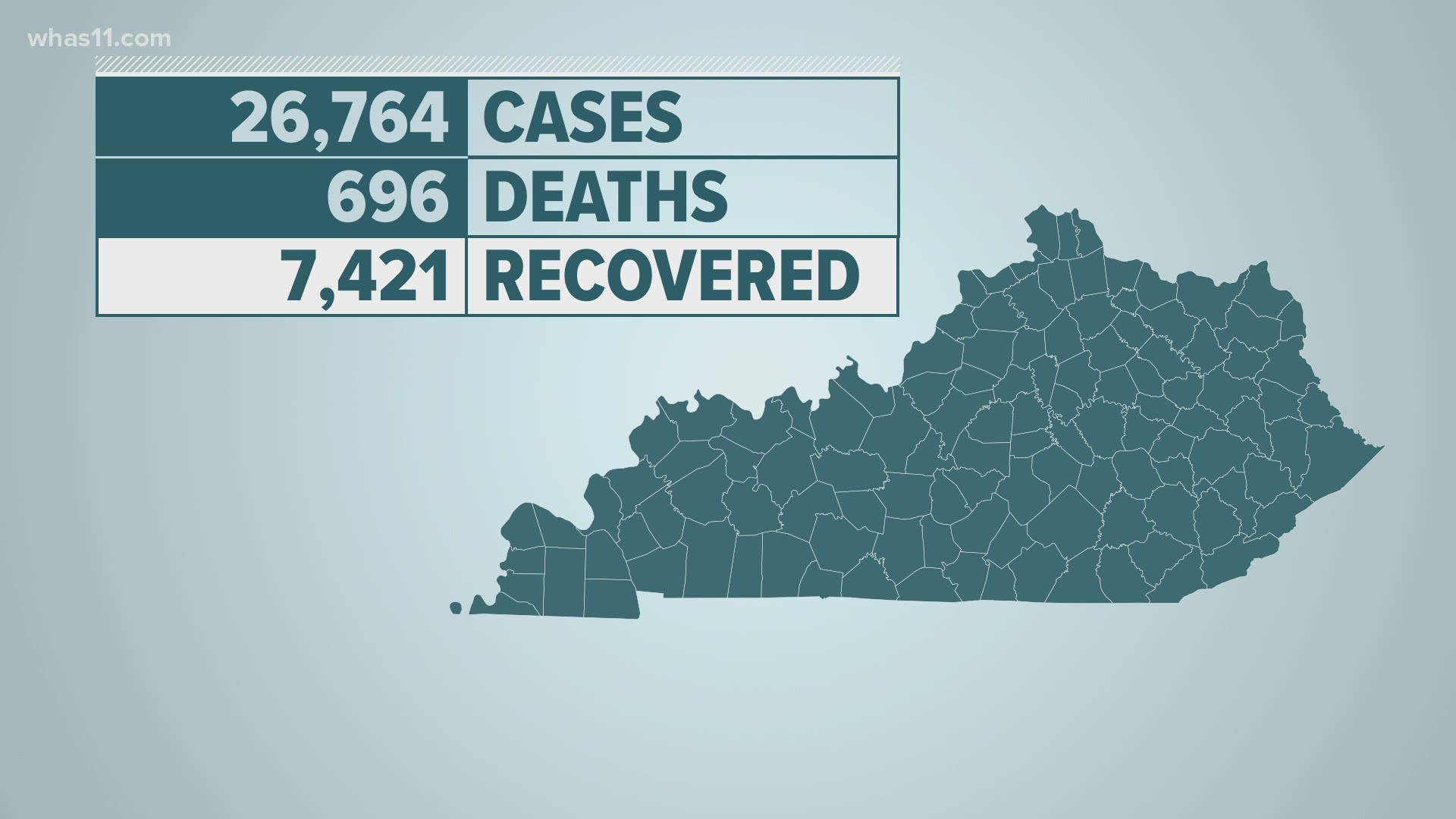 Gov. Andy Beshear is expected to announce new steps state officials will be taking as coronavirus cases rise across the nation.

Officials announced 316 new cases reported on Sunday, adding up 27,079 cases overall in the state since the pandemic began.

Eight of the new cases reported were found in children 5-years-old and younger.

“Kentucky is in that spot now where if we don’t act, we will look a lot like states in the South that are facing devastating consequences,” Beshear said in a statement. “Thankfully today’s numbers are lower than what we’ve seen recently, but we know less testing comes in on Sundays.”

Four new deaths were reported with the overall total of 700 Kentuckians who have died from the virus.

Among those deaths include a 87-year-old woman from Jefferson County.

Kentucky is once again reported another second-highest single day total of COVID-19 with 836 new case.

Twenty-two of the new cases were found in children 5-years-old and under.

The numbers were concerning to Governor Andy Beshear who said in a statement released on Saturday that additional steps are in the works if the numbers don’t stabilize.

State officials said there has been 582,521 COVID-19 tests performed in Kentucky. However, the positivity rate is at 5.41% which is the highest rate seen in months. It’s also a sign, they believe, the virus is spreading more actively.

“The number of positive cases in Kentucky is on the rise, but we can still avoid the crises confronting other states,” said Dr. Steven Stack, commissioner of the Department for Public Health, referring to other states’ filled ICU beds and increasing deaths. “Our personal choices, right now and every day, will directly determine Kentucky’s situation in early August. Small acts of kindness and personal sacrifice will make a big difference. We can choose to delay a party or picnic. We can shop for groceries or go to the pharmacy when it’s less crowded. We can opt for an online or drive-up worship service. We can wear a face mask. Every one of us has a role to play in determining Team Kentucky’s future.”

Overall Kentucky has confirmed 26,764 cases of COVID-19 while 7,421 have recovered from the virus.

The governor reported 19 more children under the age of five tested positive for the virus.

The state extended their contract with Ernst & Young, the global accounting agency, to work through unemployment claims. The new contract is for $4.4 million. So far, EY has help process 56,000 claims.

Kentucky reports 611 new cases of COVID-19, bringing the state total to 25,147. Seven more deaths were also reported, bringing the total number of deaths to 684. So far, 7,046 people have recovered.

Of those new cases, 22 of them are children under the age of five.

There are currently 581 people hospitalized and 135 people in the ICU with the virus. The governor said he believes those numbers are lower than usual.

The governor reported 13 more children under the age of five tested positive for the virus. Two of those children are five-months-old. He also reported more cases in childcare facilities across the state. There are now 36 facilities with cases – 30 staff and 21 children.

When the books close next week on last fiscal year, the governor said he is not expecting to see a budget shortfall. He does not expect cuts to education, health or public safety.

However, he said the current fiscal year does not look good and expects a $1.1 billion shortfall. Without federal help, Kentucky could face the largest budget cuts in the state's history.

Governor Beshear reported the state's second highest daily increase in positive cases. There are 674 new cases, bringing the overall total to 24,060. Three more people have died, bringing the total deaths to 674. So far, 6,927 people have recovered

Of today's new cases, 22 of them are children under the age of five.

The governor said the currently positivity rate is 4.37%, and 549,208 tests have been performed.

Lt. Governor Coleman spoke about Kentucky education, saying school districts should be flexible to keep students, teachers and staff safe. She also asked for parents to have grace for superintendents.

A virtual town hall on reopening schools will be held on Thursday.

Eight kids under 5 have tested positive for COVID-19; two are three months old.

The Kentucky Department of Health has issued a travel advisory for Kentuckians who have traveled to states reporting high numbers of COVID-19. The advisory recommends a 14-day self-quarantine for travelers who went to any of eight states reporting positive testing rate equal to or greater than 15% for COVID-19 testing. The advisory also includes one state quickly approaching a positive testing rate of 15% and one U.S. Territory.

States were identified from data reported to Johns Hopkins University of Medicine Coronavirus Resource Center. They include Alabama, Arizona, Florida, Georgia, Idaho, Nevada, South Carolina and Texas. The rate of positive patient tests in Mississippi is nearing 15%, so travelers to Mississippi are also asked to voluntarily self-isolate for 14 days. Puerto Rico is the U.S. Territory that has been added.

Dr. Steven Stack, Kentucky’s Public Health Commissioner, stressed that this is a recommendation and not a mandate. “I am appealing to Kentuckians who have traveled to these states or to Puerto Rico to consider the interest of your health and the health of others. Please, if you have been to any of these places, stay home for 14 days, starting from the date you left that location.”

He added that people planning to visit these destinations in the near future would be wise to reconsider their travel plans.

“Avoid going to these areas, if you are able,” Dr. Stack said. “If plans can’t be changed, self-quarantine after getting back to Kentucky.”

He cautioned that this list could change, and he asks the public to remain aware.

Symptoms of COVID-19 include a fever of greater than 100.4 degrees; respiratory symptoms, such as shortness of breath or difficulty breathing, and loss of smell or taste. If any of these symptoms are present, the person experiencing them should get tested for COVID-19 as soon as possible. A list of testing sites is posted on the kycovid19.ky.gov site.

The University of Louisville announced voluntary activities for men's and women's swimming will be suspended after three people in the program tested positive for COVID-19. Activities at Ralph Wright Natatorium were suspended starting July 18. Those impacted are in quarantine.

The Kentucky governor's offices announced briefings will be held Monday-through Friday at 4 p.m. this week. This is a change from the once-weekly briefings the governor had been holding in recent weeks.

The change comes as Kentucky saw the largest single-day COVID-19 case increase on Sunday. That new case total was 979, bringing the state's overall total to 23,161.

RELATED: Unemployed and need a headshot? Photographers want to help those unemployed in Kentucky and Indiana