Over the weekend, video surfaced online of a large concert at the lake, with hundreds of people crowded together without masks 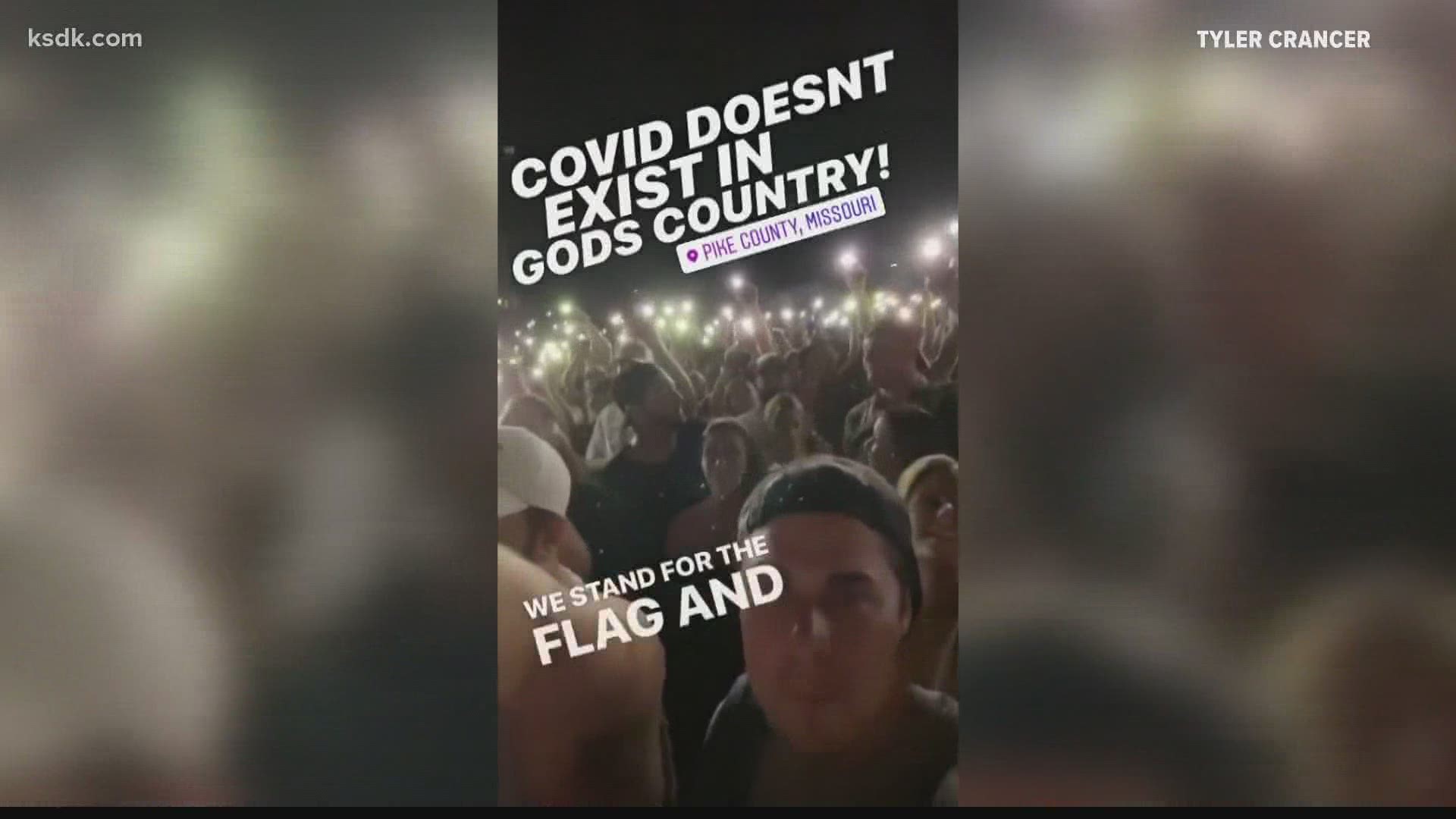 LAKE OZARK, Mo. — Lake of the Ozarks is once again making headlines for the wrong reasons.

Over the weekend, video surfaced online of a massive electronic dance music (EDM) concert at the lake, with hundreds of people crowded together without masks.

The "Lit Lake" event happened Saturday during a concert at Lazy Gators Pool advertised as "an event like the Lake has never seen."

A video of the Instagram Story for an account called "hybridtrapmusic" showed people packed in at the concert not wearing masks and not practicing social distancing.

The band Borgeous headlined, along with sets by HODJ, Maximus, US2 and Slumbr Party. The band Adventure Club had been scheduled to play at the event but canceled due to safety concerns.

"Sorry Lake Ozark- We are unable to attend the show this weekend," the band announced on Facebook on July 28. "After going through all of the options we just feel it’s still not safe to do shows or be traveling. The promoter and venue did not know our final decision until this morning. We love you, stay safe."

From last night in Missouri — I’m not sure what else to say about this that hasn’t already been. If you are one of these people attending, an artist playing or a promoter throwing an event like this right now...you’re sacrificing your industry. This is temporary gain for longer term losses at everyone’s expense. | 📹: @norfdog

After the announcement, event organizers said those who bought tickets could request refunds and listed the safety protocols it would be following.

"There are absolutely no restrictions or mandates per the Missouri Governor that impact our venue in any fashion," organizers said. It claimed that the venue was reduced to 50% capacity and everyone would have their temperature checked before entry. It encouraged but did not require masks.

"We love our fans and feel for everyone caught in awkward lodging situations with the last minute news," organizers said. "That's why we did everything in our power to give everyone an option. The choice is now yours."

RELATED: ‘No laws were broken. Social distancing is not a crime’ | Owner of bar in viral photos from Lake of the Ozarks releases statement

St. Louis County Executive Sam Page said Monday that anyone who has attended such a gathering without social distancing should quarantine themselves for 14 days.

"With the presence of COVID in our state... the likelihood of becoming positive increases dramatically," he said in reference to the event.

He also said some cases were traced back to crowds at previous events at the lake but didn't mention specific cases or events.

5 On Your Side's Sara Machi spoke to a St. Charles resident who planned to go to the EDM festival but decided not to when Adventure Club pulled out.

"The reason I was wanting to go was just for Adventure Club. That was it. And when I found out they weren’t playing anymore, I was like hmm maybe I won’t go. With everything going on, it’s not worth it," Ashley Reily said.

"I was like, is it really worth it going down to the lake of the Ozarks to see someone I have already seen? So I was like maybe not. I don’t want to put that risk to myself and my loved ones. So I decided not to go and to stay home and hung out with my new baby nephew."