More people in their 20s and 30s are getting COVID-19, but older people are dying from it

According to data provided by DHSS, people age 20-29 currently make up the largest percentage of COVID-19 cases when looking at age groups at 17 percent 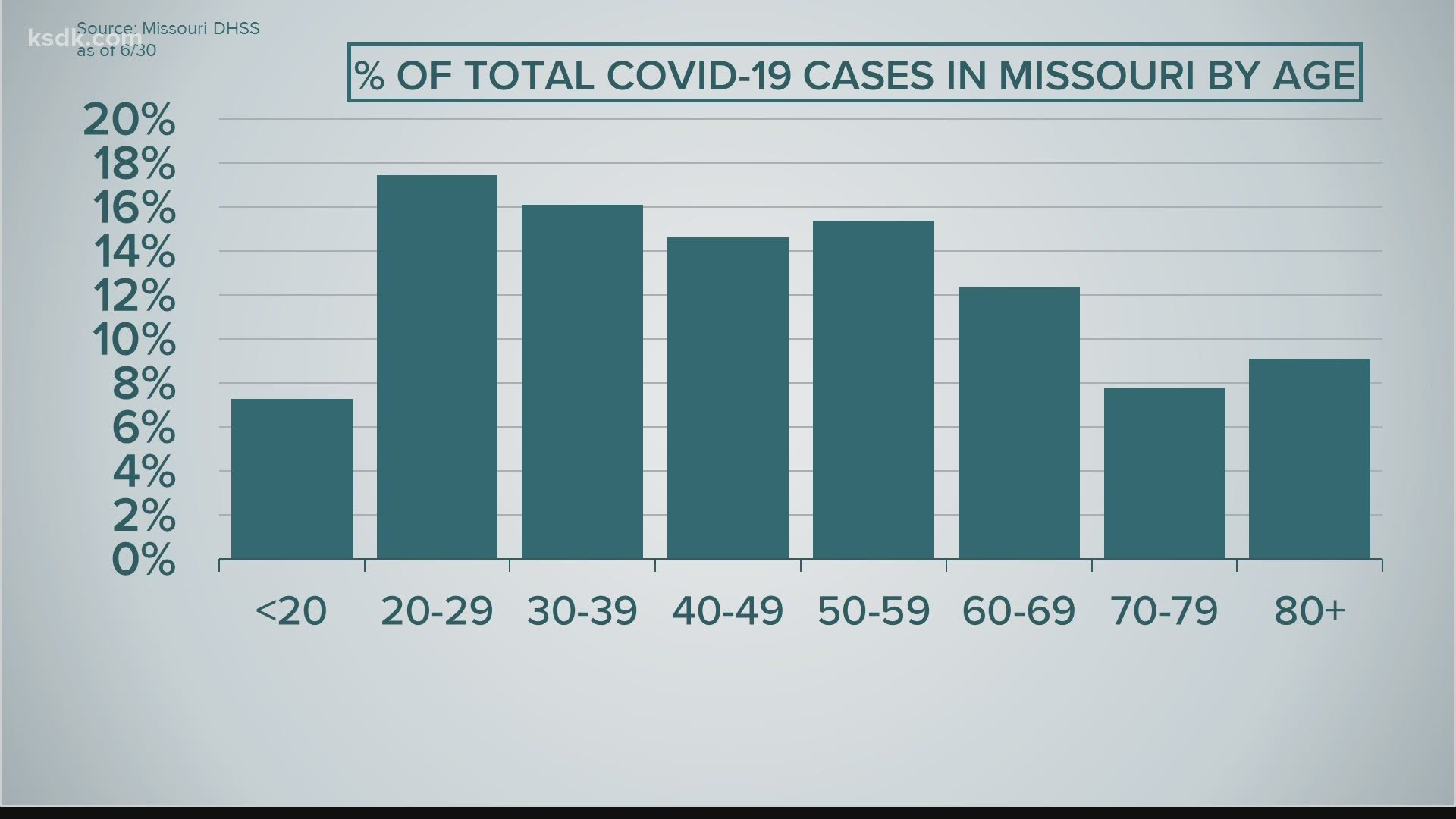 ST. LOUIS — As the Fourth of July holiday weekend approaches, states like Arizona, Texas and Florida are closing their bars citing a spike in COVID-19 cases attributed to young people gathering socially in large groups.

Locally, bars are still allowed to be open with guidelines and capacity limitations in place.

This week, the owner The Midwestern, Start Bar and The Wheelhouse in Downtown St. Louis announced he is closing those spots out of an abundance of caution.

RELATED: These St. Louis area restaurants are closed again due to COVID-19

Meanwhile, other downtown bars sport lines and popular strips like Washington Avenue are filled with young people during the weekend.

"We're seeing this trend, there's no doubt about it for 20- and 30-year-olds. As they congregate more, we're seeing more infections," Dr. Randall Williams, director of Missouri's Department of Health and Senior Services, said during a press briefing on Tuesday.

He warned people making plans for the holiday weekend to wash their hands frequently, maintain social distance and wear coverings.

However, on June 2, the data showed people in their 50s made up most of the cases at 17 percent.

COVID-19 cases for the state have grown by 59 percent in that four-week time span, with young people leading that growth.

This could be because testing has expanded, and younger people are getting tested, but it certainly rules out an ideology that young people are immune to the virus.

St. Charles County provides an age breakdown for COVID cases month-to-month, which allows for better understanding of how things have shifted over time.

In fact, a side-by-side comparison of cases for each age group from May to June shows that the most dramatic increase in cases occurred in the 20s and 30s age group. The percentage of cases that were for people in their 50s and 80s actually decreased from May to June in St. Charles County.

However, while the local cases spike for young people, they continue to make up a minuscule fraction of the people who die from COVID-19.

More than 50 percent of the people who died from the virus across the state are in their 80s, even though that group saw a decrease in cases from May to June.

St. Charles shows a more accurate shift over time, but the City of St. Louis and St. Louis County provide the current snapshot of how the cases are spread across different age groups.

The City of St. Louis displays its data by race and age group.

People in their 60s and 50s had the highest number of cases, when looking at COVID-19 in the Black community.

However, White people, Asians and other races, the highest number of cases are for people in their 20s and 30s.

Dr. Williams said the CDC confirmed Tuesday that 50 percent of people who contract the virus don't know where they got it.

He said, heading into the weekend, it's crucial for everyone to remain vigilant to stop the spread.