Two St. Louis women work to make sure those who have died of COVID-19 are honored 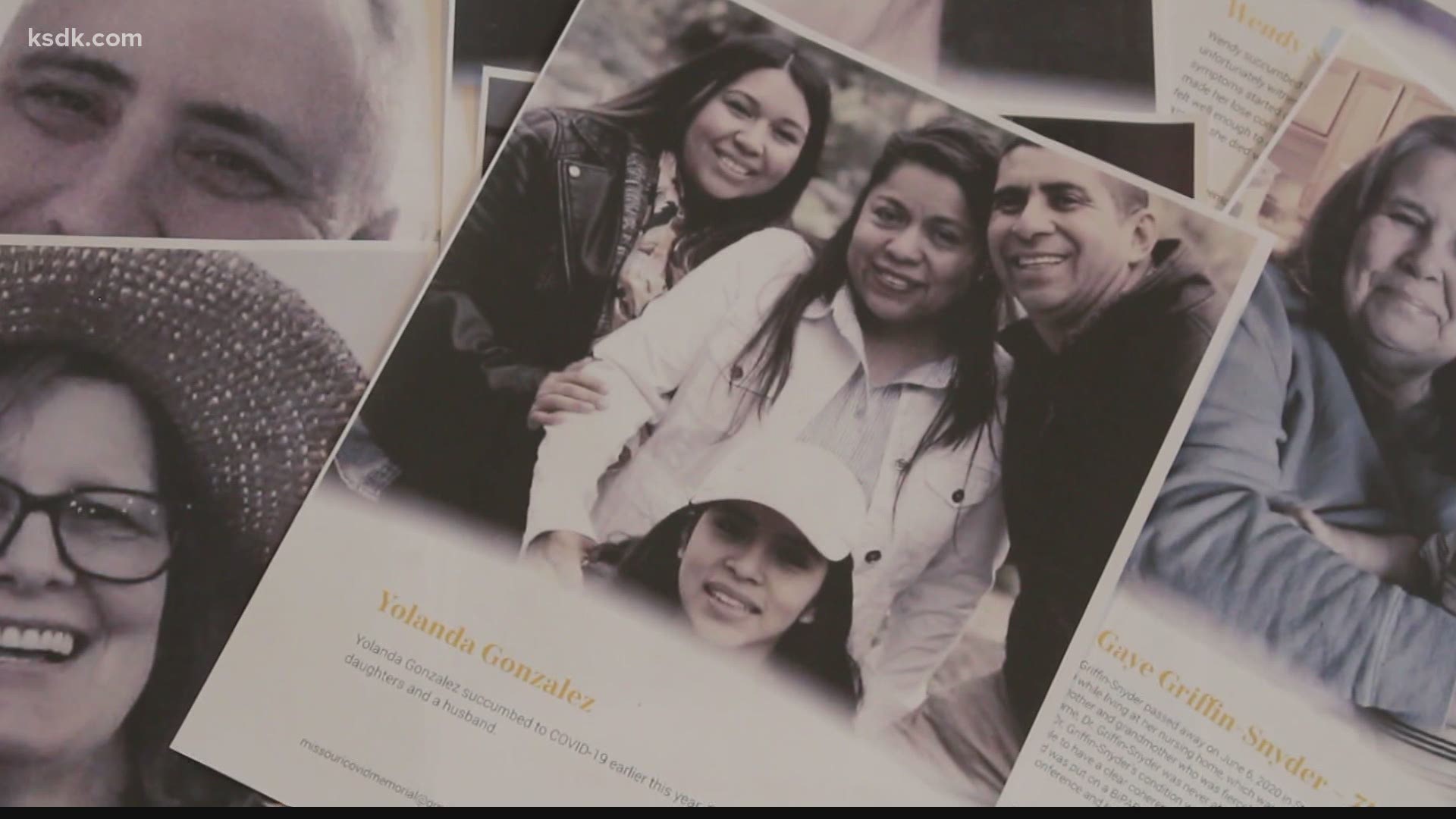 ST. LOUIS — One night in June, Jessica Murray was on a socially-distanced date—but it became clear pretty quickly her heart wasn’t in it. Instead, it was already set on a sudden idea involving people she didn’t even know.

“By the time he got back with the food, I was like buying the domain name for my phone,” she said. “I cannot believe that this was not being done.”

That night, she started StLouisCovidMemorial.com. Now she has nearly 100 written tributes to people in the St. Louis area who have died due to the virus posted to the site.

“This is the last thing that anybody would say, oh, yeah, Jessica is going to grow up and troll obituaries,” she laughs, but that’s how she gets most of her information. The site only lists people whose cause of death has been publicly identified as COVID-19 or whose family has reached out to her for inclusion.

“It is a way, I guess, of feeling, of humanizing and making sense of these horrible, this horrible loss of human life,” she said.

She acknowledged her sample is not quite representative: proportionately, it isn’t Black or brown enough, considering communities of color have been the most hit by the virus. She’s working on fixing that to paint an accurate picture of COVID-19's impact, with hopes one day the project will be adopted by a museum or university as a historic record.

“My strength is website design and writing this content and documenting it. And if it paints a story that we need these changes politically, then it paints that story,” she said.

Through this work, Murray was put in contact with Angela Kender. Her mother, a PhD psychologist and mentor to many, died before she could hold Kender’s newborn baby.

“She was, you know, a single parent and I'm her only child. So we were very close,” said Kender. “The absolute last thing that she said to me that was a coherent sentence was ‘it's not going to win. I'm fighting.’"

“That was on a Tuesday and then that Saturday she passed away.”

Her mother, Dr. Gaye Griffin-Snyder, included on Murray’s site—as well as a collection of flyers Kender made in her own project, Missouri COVID-19 Memorial. She brought those flyers to lawmakers in Jefferson City, urging them to enact policy to curb the spread of the virus.

"When she died and I realized that I couldn't mourn the way that I normally would have, I couldn't safely see all my family, and I was feeling very isolated. I started thinking about all the other people, other families that were feeling the same way. And how awful, awful that was, that there were so many of us that were, you know, unable to mourn the way that we normally would," she said.

"So that feeling, in combination with seeing our elected officials at both the state and the national level not addressing coronavirus in a way that I think is needed and appropriate-- it felt wrong to me. So the combination of those two things made me think, OK, I need we need a way to really put faces to this," she said.

“If seeing people who have died does not inspire our lawmakers to put things in place to protect our communities, I truly don't know what will,” she added. “It is it is offensive the way that it's being handled right now.”

Both admit that at times, their projects can weigh heavily on them. Murray has limited herself to writing one tribute per day. Kender has chosen to focus on making change.

“The relief that these families have expressed to me about having someone who cares and is willing to speak up for their person outweighs the pain of those stories, because we're we're trying to do something here,” she said.

It may be something big, or it may be simply better than nothing—Murray says she has felt a connection with every person on her site, even during a time of distancing. Either way, the woman know the toll is human—and we can’t distance that from the daily death count.

“This could easily be my my my friend, my wife, my husband, you know, anyone, my child,” said Kender.

“It's important that these are the faces behind the numbers,” said Murray.

To contact Murray or Kender on behalf of a loved one who has died of COVID, email jessica@stlouiscovidmemorial.com or missouricovidmemorial@gmail.com