State Senator Andrew Koenig's bill calls for a maximum shutdown of two weeks over a two-year period. Anything beyond that must go through state lawmakers 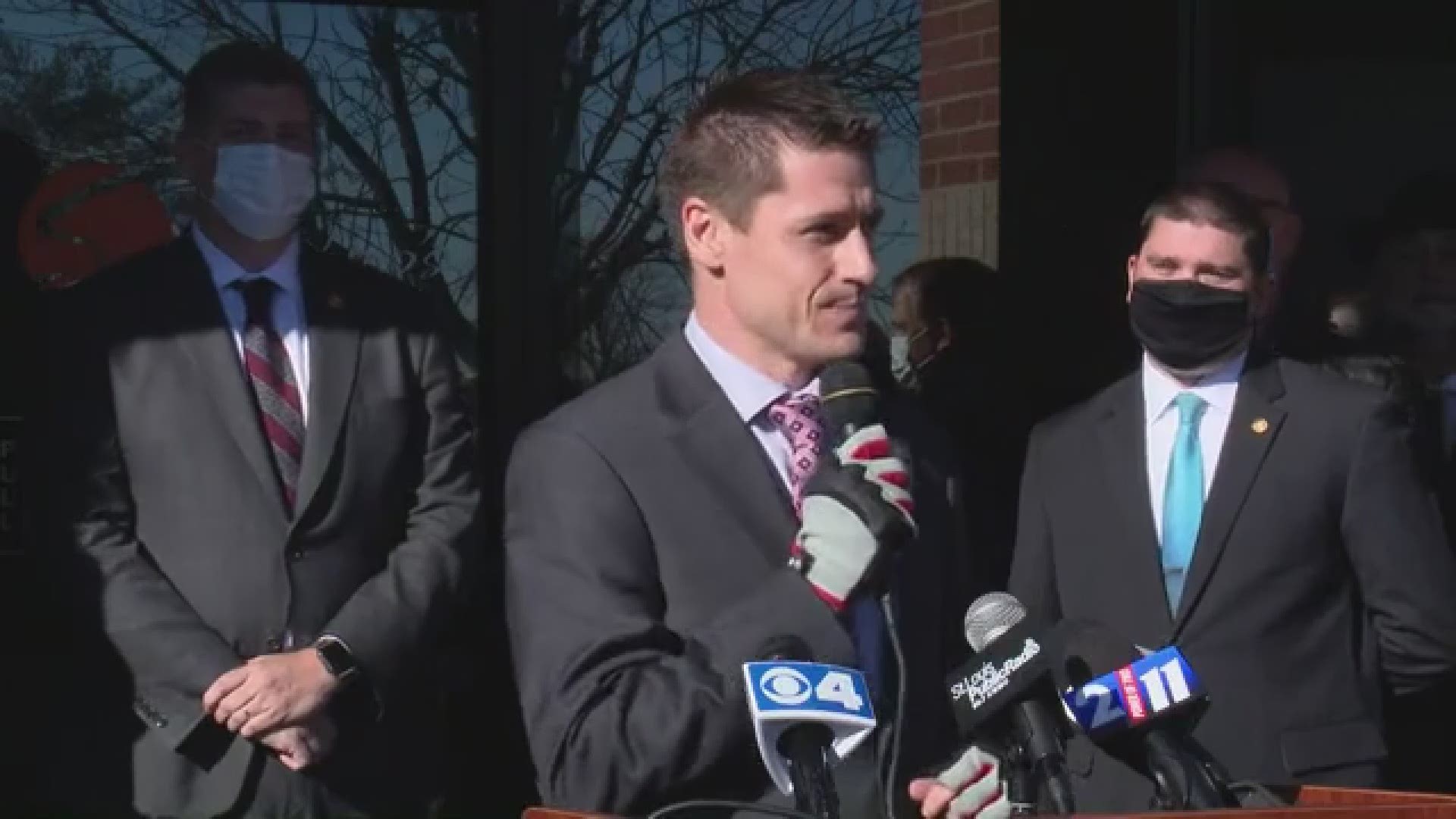 ST. LOUIS COUNTY, Mo. — Several lawmakers and business owners came together Tuesday morning with a united message: one person shouldn’t have the final say on restrictions in local municipalities.

“No one person should have the power to make law and shut our businesses down,” said State Senator Andrew Koenig.

The Republican lawmaker and others who joined him referred to St. Louis County Executive Sam Page and the health orders he has enacted during the COVID-19 pandemic, most recently shutting down indoor dining in county restaurants and restricting capacity at other businesses to 25%.

“We don’t want one-person rule,” Koenig stressed to the reporters and people gathered outside Satchmo’s Bar & Grill in Chesterfield for his announcement Tuesday.

Koenig — who represents the 15th district, which includes a large portion of central, southwest and west St. Louis County — released details about the bill he plans to file that would not only limit Page’s powers, but it would restrict the authority of local leaders throughout Missouri.

The main draw of his bill calls for a maximum shutdown of two weeks over a two-year period. Anything beyond that must go through the Missouri General Assembly and then be signed by the governor, Koenig said.

The state lawmaker’s bill also states a shutdown can’t happen without a legislative body voting on it first. He also included protections for businesses, religious institutions and parents.

Koenig said he plans to file the bill in the regular session next year and the special session this year. It includes an emergency clause, so if it gets passed by the general assembly and signed by the governor, it goes into effect immediately.

Bob Bonney, director of the Missouri Restaurant Association, said St. Louis County is home to more than 2,000 eating and drinking establishments which employ more than 46,000 people.

“Restaurants in St. Louis County will be devastated by the shutting down of their dining rooms for a second time,” said Bonney. “Many industry employees will find themselves out of work, and the temporary closure will likely result in permanent closure of many restaurants across the county. What the industry seeks is due process, the opportunity for public comment and the same rights afforded other businesses.”

Ben Brown, owner of Satchmo’s Restaurant in Chesterfield, said the restaurant industry sacrificed as much as any industry in St. Louis County, and he and other owners were forced to make incredible decisions regarding who gets to get a paycheck or who will be laid off.

“These are mothers and fathers with mortgages and mouths to feed,” said Brown. “These are college students living paycheck to paycheck. The damage is very real, but the data to support it appears to be non-existent.”

Murphy said, “We can’t keep everybody from traveling. We can’t say traveling in a plane is safe and sitting in this restaurant is not. There is no evidence saying closing this restaurant is going to change anything. What is Sam Page afraid of? Why is he afraid of oversight? Why is he afraid the council can’t look at what he’s doing or the information he’s basing his decisions on?”

Page has argued the county charter gives him and the county health department emergency powers to impose restrictions.

Restaurant owners dispute that authority and already are suing him and the county over the shutdown of indoor dining. A judge denied the restaurant owners' request for immediate action and that suit continues.

St. Louis County Council member Lisa Clancy, a Democrat, said, “There isn’t a real bill here. There is a lot of whining about inconvenience that, were it ever to become law, would overcrowd our hospitals, overwork our nurses and doctors, and get more of our loved ones killed. I am pretty confident the Governor and a majority of legislators will see it this way, too.”

After Koenig released details about the bill Tuesday, Page said he will continue to follow the advice he receives from health care leaders in making decisions about public health orders.

On Monday, before details about the bill were released, the county executive said, "This legislation does provide the opportunity to discuss these difficult decisions around public health orders."

"But what I've seen in St. Louis County and even across the country is that the vast majority of our residents understand the difficult sacrifices we are making, including restrictions on restaurants and bars for indoor dining and recognizing that these are difficult but necessary decisions," said Page in his near-daily news conference Monday.

The county council has voted to limit Page's power, but did not have the votes to override his veto and has failed to pass other attempts to limit his authority during this pandemic.

Koenig wants Governor Mike Parson to expedite his bill by including it in a special session Tuesday.

But would supporting a bill aimed at St. Louis County require the governor to flip his position on how COVID-19 mandates should be made?

"You've got to give the local areas the flexibility to know what's best for their communities," Parson said about restrictions this past summer and several other times since.

Monday, his spokesperson Kelli Jones would only say, "Governor Parson expects the legislature to address this issue in January," which means he likely won't add it to a special session and any bill lawmakers pass may not take effect for months.

You can watch the full announcement from Koenig, lawmakers and business leaders in the YouTube video below.