Dr. Dunagan said he believes the return of mask mandates in the St. Louis area will be a precursor for much of the rest of the country 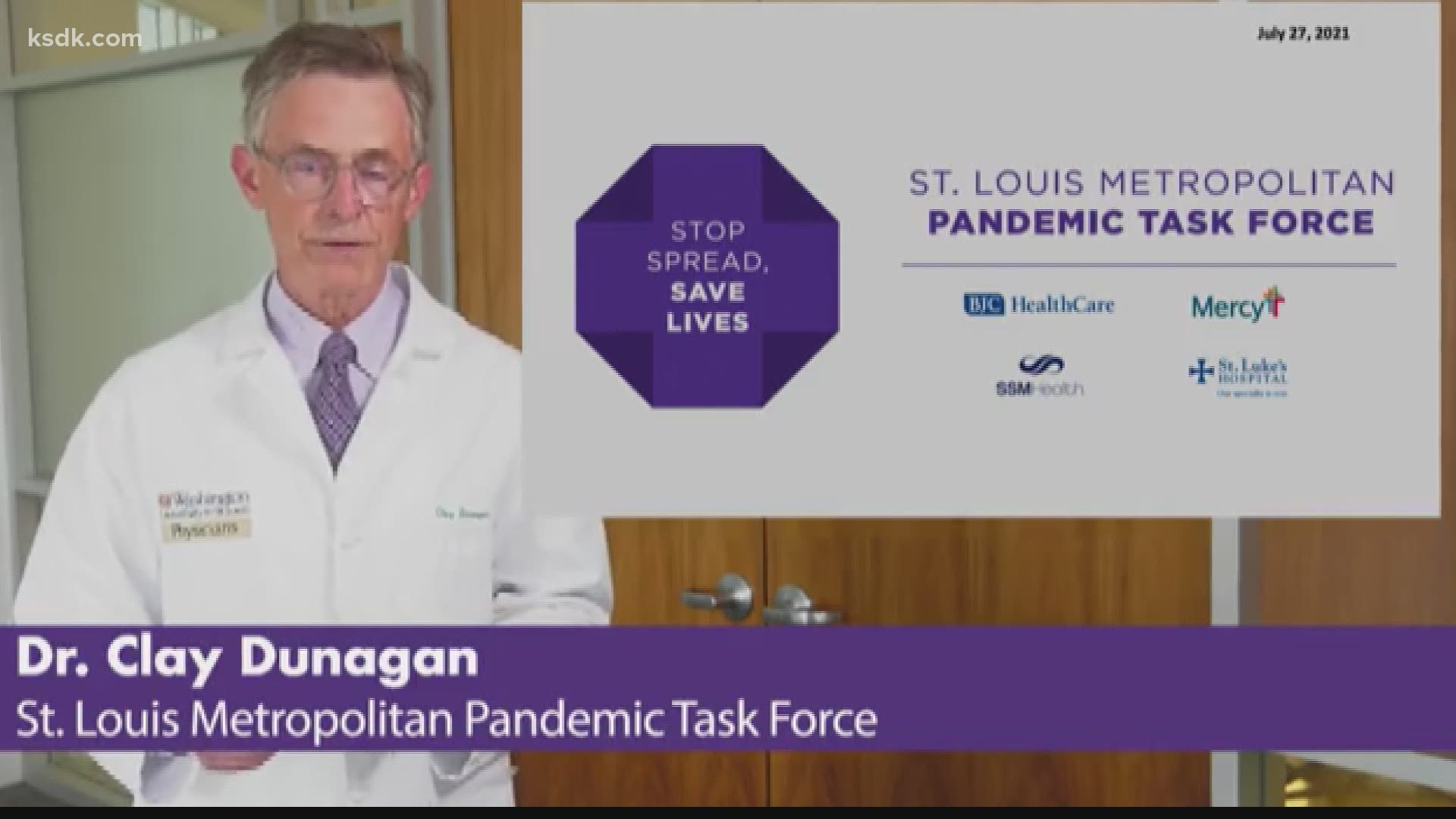 ST. LOUIS — The St. Louis Metropolitan Pandemic Task Force renewed its call for people, even those who are vaccinated, to wear a mask as hospitalizations continue to climb.

"Sometimes you have to deliver bad news to good people, often it's that way" said Dr. Clay Dunagan during a Tuesday afternoon briefing. "Well, today, we're talking about a patient that is sick, it's our community. And it's sick even though many people in the region have done everything that's been asked of them."

Dr. Dunagan said the call comes as the CDC changed its guidance on masking for vaccinated individuals. The new guidelines say vaccinated people should mask up indoors in parts of the country where the coronavirus is surging.

RELATED: CDC reverses course on indoor masks in parts of US where COVID is surging

"That really qualifies for most of Missouri, certainly the St. Louis region," Dr. Dunagan said of current conditions that could change mask guidance.

According to task force data, COVID-19 cases are up 44.6% over the last 14 days when compared to the previous 14 days.

Dr. Dunagan said the mask mandates are not a permanent solution or the most important tool in ending the pandemic, but they are necessary until enough people can get vaccinated. He said the region had a chance to avoid the surge by getting vaccinated but did not take advantage.

"The diagnosis is not good," Dr. Dunagan said. "We missed a chance to avoid this surge, it slipped by us because or vaccination rates were not high enough and now we need to take corrective actions."

Dr. Dunagan said he believes the return of mask mandates in the St. Louis area will be a precursor for much of the rest of the country.

"I believe much of the country is going to follow suit with this and will have to suffer through these same challenges that we are, but we're here right now and we have to deal with what's in front of us," he said.

Dr. Dunagan said hospitals are "operating pretty much at capacity" due to the increase in COVID-19 patients and the backlog of procedures from the previous spikes.

He said most of the hospital systems in the St. Louis area will probably have to limit the types of procedures they are doing, similar to what hospitals in the southwestern portion of the state have had to do.

"What that means practically is if you have an emergent healthcare need — you may be in a car wreck or have a heart attack or stroke — and you may find yourself needing to wait or be transferred before you can receive care because the nearest hospital may be at full capacity," he said.

Dr. Dunagan said the surge could match or exceed that of last holiday season when there were as many as 962 hospitalized COVID-19 patients.

Dr. Dunagan said the task force is also starting to see an uptick in deaths, including seven on Sunday, the highest single-day total it has reported since May 13.