#VintageKSDK dug into the archives for a look back at Prince Charles’ visit to St. Louis, which drew big crowds. 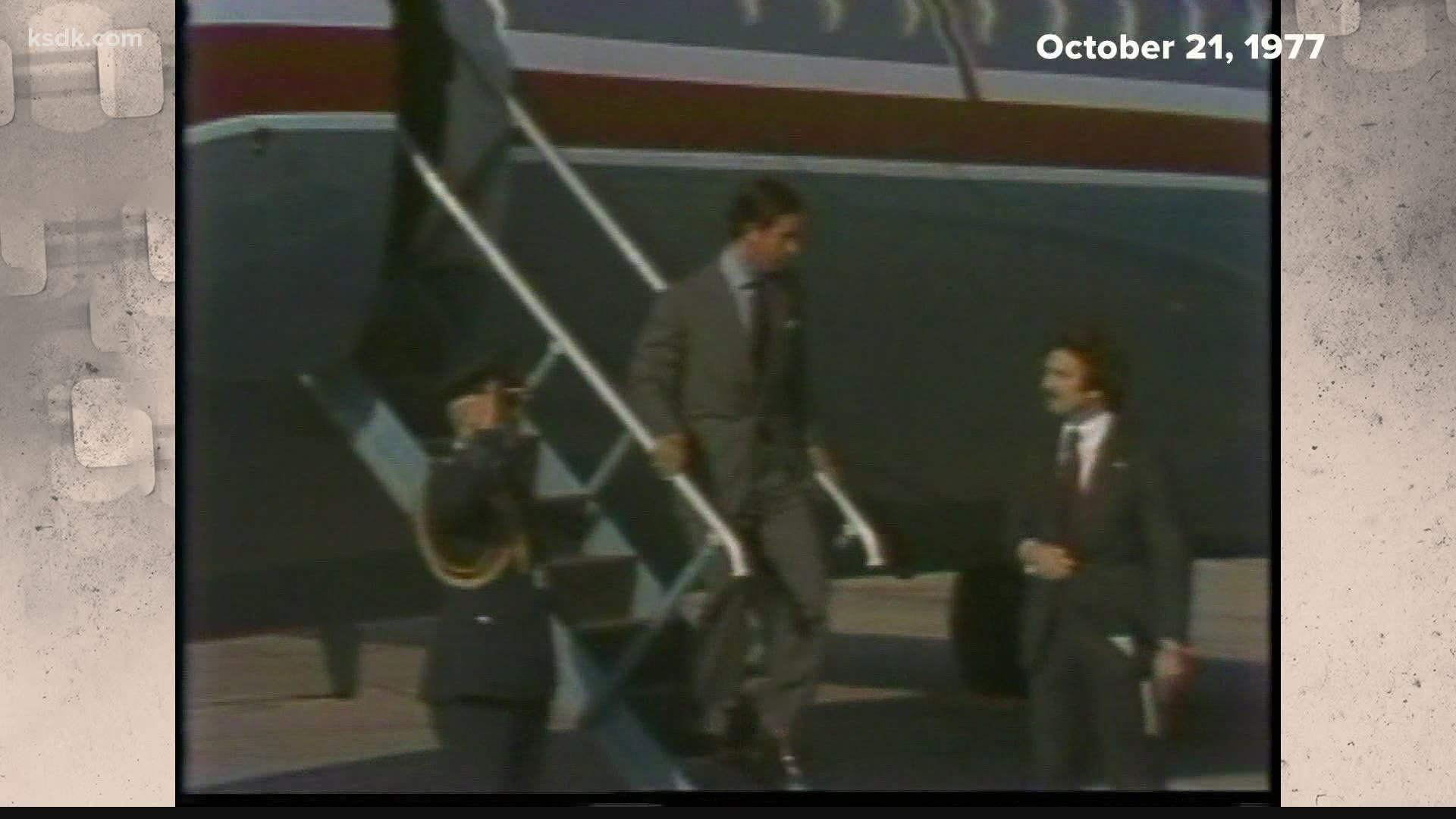 ST. LOUIS — The Prince of Wales, Prince Charles, has been in the news a lot lately, thanks to the tell-all interview his son Prince Harry and daughter-in-law Meghan, the Duchess of Sussex, gave to Oprah Winfrey in early March.

But Prince Charles made headlines of his own, right here in St. Louis during the fall of 1977.

On Oct. 21, he spent six hours in the St. Louis area, including a trip to the top of the Gateway Arch.

To imagine the impact of this trip, you have to go back in time before his July 1981 marriage to Lady Diana Spencer. Before he met and married Diana, Prince Charles was one of the most eligible bachelors in the world.

As you might imagine, the young prince created a lot of excitement during his visit to St. Louis. You can watch the raw video of the visit on 5 On Your Side's YouTube channel and in the video below.

It all started with a big welcome at St. Louis Lambert International Airport.

Then-St. Louis Mayor James Conway and County Supervisor Gene McNary were among the dignitaries. Students from Kratz Elementary welcomed the prince with a giant banner, and he even stopped for a few minutes to chat with the children.

Credit: KSDK
Prince Charles meets with students from Kratz Elementary School during his visit to St. Louis on October 21, 1977.

Then it was off to the Gateway Arch where he shook hands and spoke to well-wishers.

Those conversations were difficult to hear because Prince Charles asked his security detail to keep all microphones at least 10 feet away.

Also on hand, a small group of demonstrators protesting the British presence in Northern Ireland.

Our reporter talked with one of the protestors. “Do you think he read the sign?” our reporter asked. “Oh, definitely read the sign. He read it, he looked at my face and he smiled.”

Once inside the Arch, Prince Charles rode to the top where his tour guides encouraged him to lean in and look out the window.

Credit: ksdk
Prince Charles looks out the windows of the Gateway Arch on a trip to St. Louis, October 21, 1977.

The next stop was the Old Courthouse. The prince walked there from the Arch grounds, stopping along the way to watch a dance performance by The Black American Folklore Society.

Many young women were also in the crowd that day, hoping to meet the prince. Some had better luck than others. Specifically, one young woman who traveled a long way for a chance meeting.

“My father introduced himself and he immediately asked my father who the young lady was standing next to him. My father explained that I came all the way in from Purdue University to meet him and the prince seemed so flattered he looked at me, and said, 'Oh, well, how are your studies?' and 'I am so flattered that you came all the way and put your books behind just to meet me.' I was so flabbergasted I didn't know what to say,” she told our reporter.

About 200 people greeted Prince Charles when he entered the Old Courthouse. There, he was was showered with gifts, including a replica of the Gateway Arch.

Following a private reception, the prince stepped in front of the microphone.

“When I was in school, I once performed in the round, Macbeth. It's rare that I had a reception in the round,” remarked Charles, referring to the floor under the rotunda. “I was so pleased to meet all of you, well some of you and shake your hands. I shook quite a few.”

Prince Charles said the visit reminded him of the special relationship Britain has with the United States.

“I am very grateful that I shall take back all sorts of happy memories to the queen and tell her that all is right in this part of the globe.”

Prince Charles wrapped up his visit with a tour of the McDonnell Douglas plant.

James McDonnell, the founder of the company, showed him around in a golf cart. Prince Charles is no stranger to aviation. He trained as a jet pilot in the Royal Air Force and flew helicopters in the Royal Navy.

St. Louis was one of several cities he visited during his 13-day tour of the U.S. He also made stops in Chicago, Cleveland, Atlanta, Charleston, Houston, Los Angeles and San Francisco.

One observation many reporters had at the time, was the lack of heavy security surrounding him.

Prince Charles isn’t the only royal to visit St. Louis.

The former wife of Prince Andrew spoke in front of hundreds of cheering people packed into a ballroom at the Frontenac Hilton Hotel. It was billed as a Weight Watchers Super Meeting, and the tour launched her debut as a spokesperson for Weight Watchers.