The jurors said they were never given the option to consider additional charges. 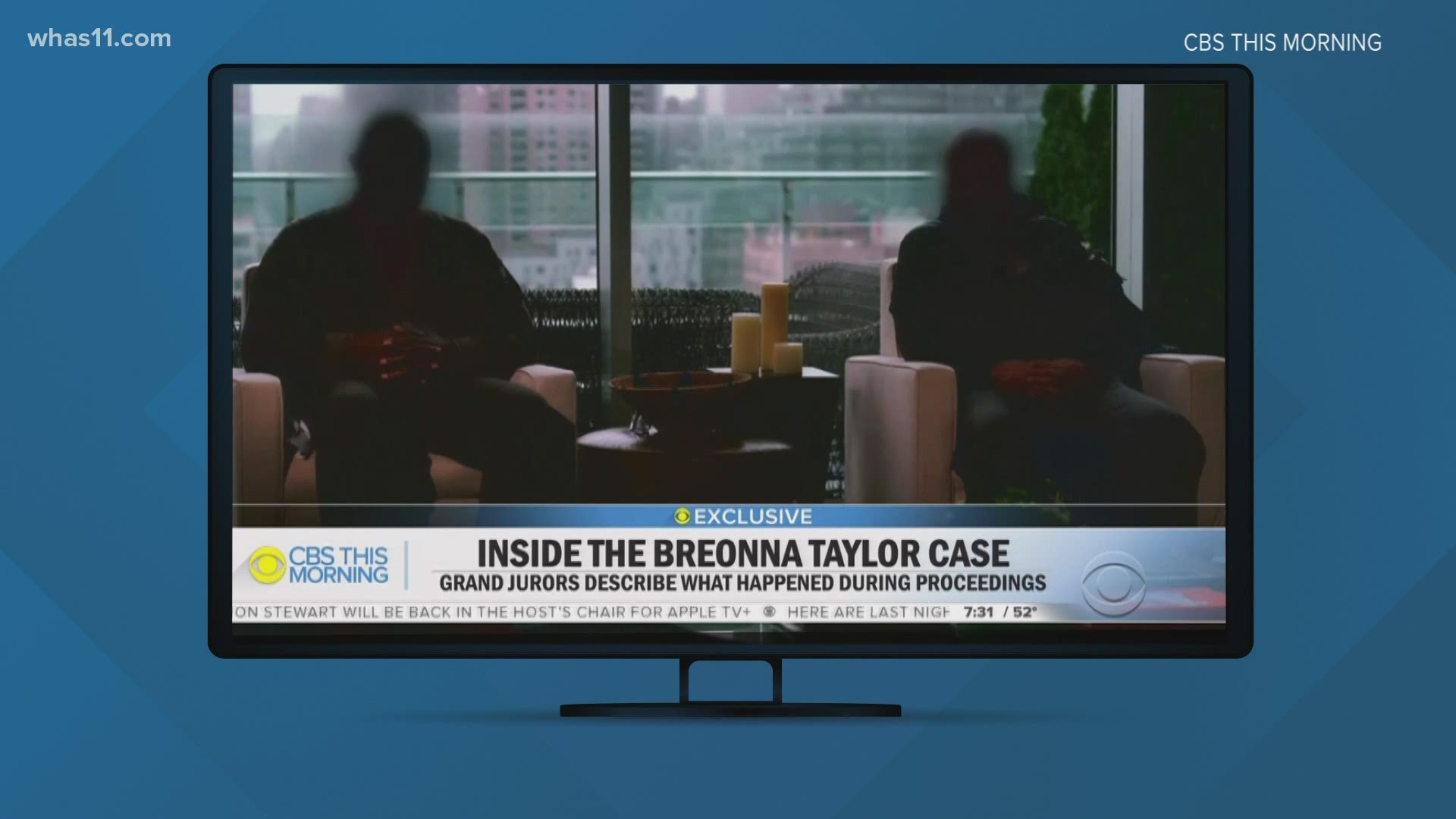 In an interview with Gayle King of "CBS This Morning," the jurors said they were never given the option to consider additional charges. The two also described LMPD's actions as "negligent" and "criminal."

"They were criminal leading up to this," Juror No. 2 said. "The way they moved forward on it, including the warrant, was deception."

The two jurors, one a Black man and the other a white man, said many members of the grand jury were upset by Cameron's statement that they "agreed" homicide charges against the officers were off the table.

"While there are six possible homicide charges under Kentucky law, these charges are not applicable. In fact, before us, because our investigation showed that, the grand jury agreed," Cameron said on September 23 during the announcement of charges.

"The first time I heard six possible murder charges was in that news conference," said one of the jurors, explaining it was not presented to them during deliberations.

Juror No. 2 also said he felt the decision was up to Cameron, not the jury.

Juror No. 1 expressed a similar sentiment in a letter on Oct. 20, saying the jury was never given the chance to deliberate on any other charges in the case. He also said the jury did not agree that certain actions by the officers were justified "nor did it decide the indictment should be the only charges in the Breonna Taylor case."

Louisville community activist and Gamechangers Executive Director Christopher 2X was in the room with Gayle King, the grand jurors and their attorney during the interview.

"When you're hearing it in real time, it becomes even more powerful," he explained.

He spent the last month assisting them in getting their voices heard, since the first grand juror filed suit days after the charges were announced.

"It was about the frustrations they were feeling and how could they attempt to explain what they were talking about," Christopher 2X explained.

He also noted how rare it is to hear from grand jurors in any case, given the secrecy of those proceedings.

Both jurors remained anonymous, their faces blurred throughout the interview. Attorneys for Taylor's family said the juror's statements have proven that "Cameron took the decision out of the grand jury's hands," calling for a new independent prosecutor.

On Wednesday afternoon, both jurors spoke over the phone with reporters from multiple news outlets to discuss what was presented to them during the proceedings.

During the call, they said only charges for former officer Brett Hankison were presented. The grand jury indicted Hankison on wanton endangerment charges for shots fired into an apartment neighboring Taylor's.

Attorney General Cameron said Sgt. Jonathan Mattingly and Detective Myles Cosgrove were justified to protect themselves under the law.

"When they finally did present the charges to us, the room, almost all of us in the room at once said 'Isn't there anything else?' And it was asked more than once if any other charges could be brought against all three of the officers," Juror No. 1 told reporters.

The jurors said their questions were not welcome, including a question about the warrant for Taylor's apartment.

"One of the grand jurors asked about the warrant and we were told something similar to 'oh the warrant was fine' and we don't need to think about that," Juror No. 2 told reporters.

Earlier this month, Attorney General Cameron released a statement saying he remains confident in the presentation to the grand jury and it was his decision to ask for an indictment on charges that could be proven under Kentucky law.

In a separate interview with ABC News, Sgt. Mattingly said that while he hurts "for [Taylor's] mother and for her sisters," he believes the officers did the right thing the night of her death.

RELATED: Sgt. Jonathan Mattingly says 'Breonna Taylor would be alive' if officers didn't wait for someone to answer door