Questions raised about safety after chimpanzees repeatedly escape near Festus

Twice this summer chimpanzees have escaped from the Missouri Primate Foundation. They're also facing a lawsuit from PETA over "unsanitary" and "inhumane" conditions 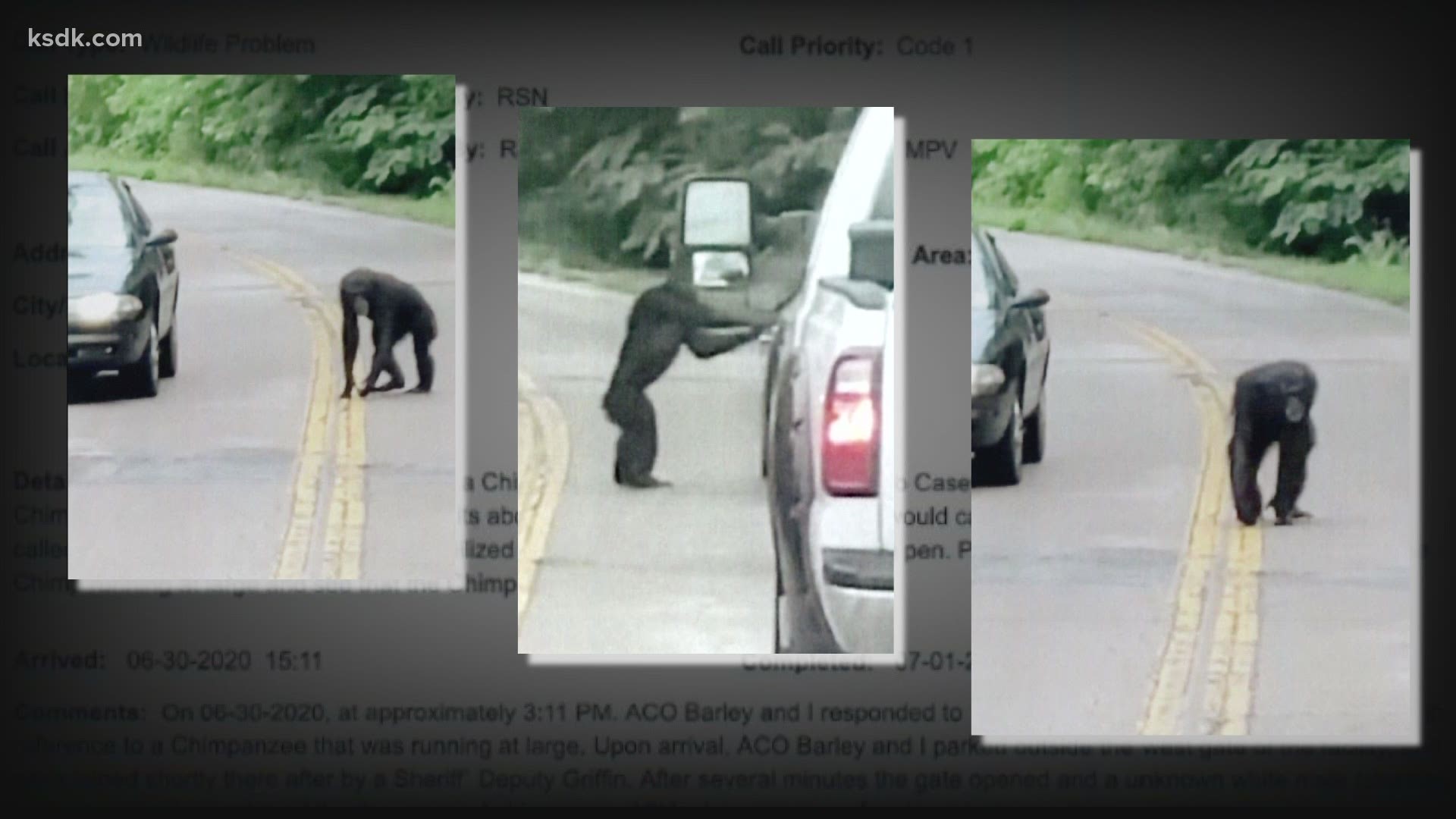 JEFFERSON COUNTY, Mo. — In 2015, news of a chimpanzee ripping a woman's face and hands off in Connecticut made national headlines.

“That was one of the things that kind of opened my eyes to advocating to get these animals out of residential areas and out of people's homes,” said Jason Coats of De Soto.

Fourteen years earlier, in 2001, Coats came face to face with that chimpanzee's parents outside his parents home in Festus.

“I pulled in my driveway. There was a 180 pound grown male chimpanzee just walking across the driveway,” said Coats. He was 18 years old at the time.

Back then, chimpanzees were being bred and sold right next door by a business called Chimparty. They rented chimpanzees out for parties, TV ads and movies from their farm on Highway CC. Some of the chimpanzees from Chimparty appeared in movies like George of the Jungle, Babe: Pig in the City, Buddy, MVP: Most Valuable Primate and Spy Mate. Some were even featured on Hallmark cards that may still be on store shelves today.

Coats says he saw a very different side to the species that day in 2001.

“There's three of them running at us,” said Coats. “I'm thinking, ‘you're gonna kill my dog’.”

That day three chimpanzees had escaped from Chimparty. Coats said they were aggressive.

“It's like a horror movie. It was it was on its knuckles, like running at us. We hurried up, got back in the car and close the door,” said Coats. “About that time, you see the chimp trying to catch the door as it went by. But it missed and close. It jumped up on the hood, slapped it a couple times, jumped off and was on the passenger side.”

Coats said it was around that time he noticed a pick up truck pull into his yard. He says in it were Chimparty owner Connie Casey and another employee.  He says they were firing a tranquilizer gun at the Chimps.

“There was my dog running laps around this chimpanzee. And he's not listening. I mean, we're just kind of screaming. The chimpanzee looked at me and did the same gesture that the male did whenever they go to charge. I shot three times,” said Coats.

That chimpanzee, known as Suzie, died.

Suzie was the mother of the chimp that attacked Charla Nash in Conneticuit in 2015. That chimpanzee's name was Travis and he was born and bred at Chimparty.

That’s something Coats vehemently denies based on what he says he saw after the chimpanzee was shot.

“The first thing [Casey] did, she walked up and hit it with a syringe of some sort. I've witnessed that with my own two eyes,” said Coats.

Coats was charged with a felony destruction of property and ended up serving 30 days in jail.

“I pulled in my driveway and was attacked by three of them and I had to shoot it. that wasn't a decision I made for myself. That was a position that I was forced into. and it is still paying the consequences for it,” said Coats, who adds he missed the birth of his first child while serving his sentence. He says the felony conviction has also limited his employment opportunities as a union carpenter.

Chimparty has since turned into the Missouri primate foundation, a nonprofit housing as many as 16 chimpanzees and other primates.

The I-Team found at least twice this summer, chimpanzees have gotten out and wandered around the neighborhood.

One escape took place on June 30. A woman who lives across from the property told the I-Team she found a chimpanzee in her living room. She was able to scare it away.

Images posted on social media by drivers along Highway CC show the chimpanzee leaning against a passing car. Finally a man is seen leading the chimpanzee back into the facility.

The most recent escape happened Aug. 9. A spokesperson for the Jefferson County Sheriff's office said an unsecured lock allowed the chimpanzees to escape. A woman at the facility suffered minor injuries but declined medical treatment.

Most neighbors told the I-Team they didn’t have a problem with the facility, but they did wish the chimpanzees were locked up more securely.

“This is not safe. like, how is this even possible? And it just keeps going and going,” said Coats.

The Missouri Primate Foundation (MPF) is also the target of a lawsuit filed by people for the ethical treatment of animals (PETA).

It claims the chimpanzees are held in unsanitary conditions, deprived of social contact and enrichment and not given proper food or medical care.


In a statement PETA said it wants the chimpanzees moved to an accredited sanctuary to protect them and the community.

“A chimpanzee escape can easily end in tragedy, whether it's the animals' deaths or an attack on a keeper or passerby. PETA is calling for these chimpanzees to be sent to an accredited sanctuary, where their complex needs would be met in a spacious, naturalistic, secure habitat that would protect both them and the community,” said Jared Goodman, PETA Foundation Vice President, in a statement to the I-Team.

The I-Team reached out to Casey for the foundation's comment. While Casey did not respond, we were able to connect with Tonia Haddix, an exotic animal dealer who claims the chimps at the foundation now belong to her.

Haddix told the I-Team safety measures have been added to prevent future chimpanzees from escaping.

“We are implementing secondary doors on facility to keep chimps in if they were to get out of cage and putting safety latches on all cages that automatically shut and lock to prevent them from being able to get out of cage,” said Haddix in a message. “I will say that these chimps have been here for 50 years with no issues known so that speaks for itself. I live 50 feet from them for three years and worry not.”

Haddix appears to be living with Casey and caring for the chimpanzees. She has a current dealer and carrier license with the USDA. On her Facebook page, she posts animals for sale ranging from primates to giraffes, sloths, and otters.

Animal rights advocates say Missouri has some of the most relaxed laws when it comes to who can own exotic animals.

According to the Missouri Department of Agriculture you do not need a state or federal license if you plan to keep a primate as a pet. However there may be city or county laws that would require some type of permit.

From at least 1994 to 2019, records show Casey held an exhibitors license related to Chimparty. According to the state of Missouri, an exhibitor license is necessary if you’re letting people pay to see your animals.
Casey’s license has lapsed as of June 2019, and it appears she is now keeping the animals as pets.

As far back as 2017, PETA claimed that Casey was not exhibiting the chimps anymore.

However Casey’s facility has been inspected by the USDA several times over the years.

At least five times from 2014 to 2016, inspectors found issues related to sanitation.

“There were several enclosures which had not been cleaned properly because the licensee was unable to shift the animals out of their enclosures due to their aggressive nature,” reads one inspection report from April 2014.

“Licensee was allowing piles of waste to accumulate in the gibbon and macaque enclosures. Decaying food and grime were visible within the enclosures, and the uncleaned mister pipe was housing flies. Poor ventilation and cockroaches,” reads another inspection report from October 2014.

Before PETA filed its lawsuit against Casey in 2017, she attempted to sue the animal rights organization in November 2016.

In her suit, which was later dismissed by a Judge, she calls PETA, ““a militant, activist, animal rights group using its cloak as a non-profit organization to threaten and bring litigation under the Endangered Species Act as the basis for some of its fundraising activities and makes claims for attorneys’ fees under the Equal Access to Justice Act…and other similar laws to fund its litigation war chest in furtherance of two of its goals, which are to end private ownership of animals and to have human or non-property rights bestowed upon non-wild, non-human primates, which under applicable law are considered to be private property.””

Coats says he’s sharing his story once again so people don’t lose sight of how unpredictable these animals are.

“They are one of the most dangerous killing machines that's on land. They're smart, they're strong, and they're dangerous,” said Coats.

He knows something must be done.

“Just don't have these things for pets to begin with, for crying out loud. It should not be in a residential area. They should be a proper sanctuary and that's it,” said Coats.

As of 2018, court filings show Casey has twice offered to make a deal with PETA. She has largely agreed to give up the chimps to prevent PETA from suing. PETA hasn’t accepted either of these offers.

Haddix says only seven chimps remain in the foundation’s care.

"I only want these chimps to live in the only home they have known and well loved and care for," said Haddix.