Festus chimps that kept escaping being relocated after PETA agreement 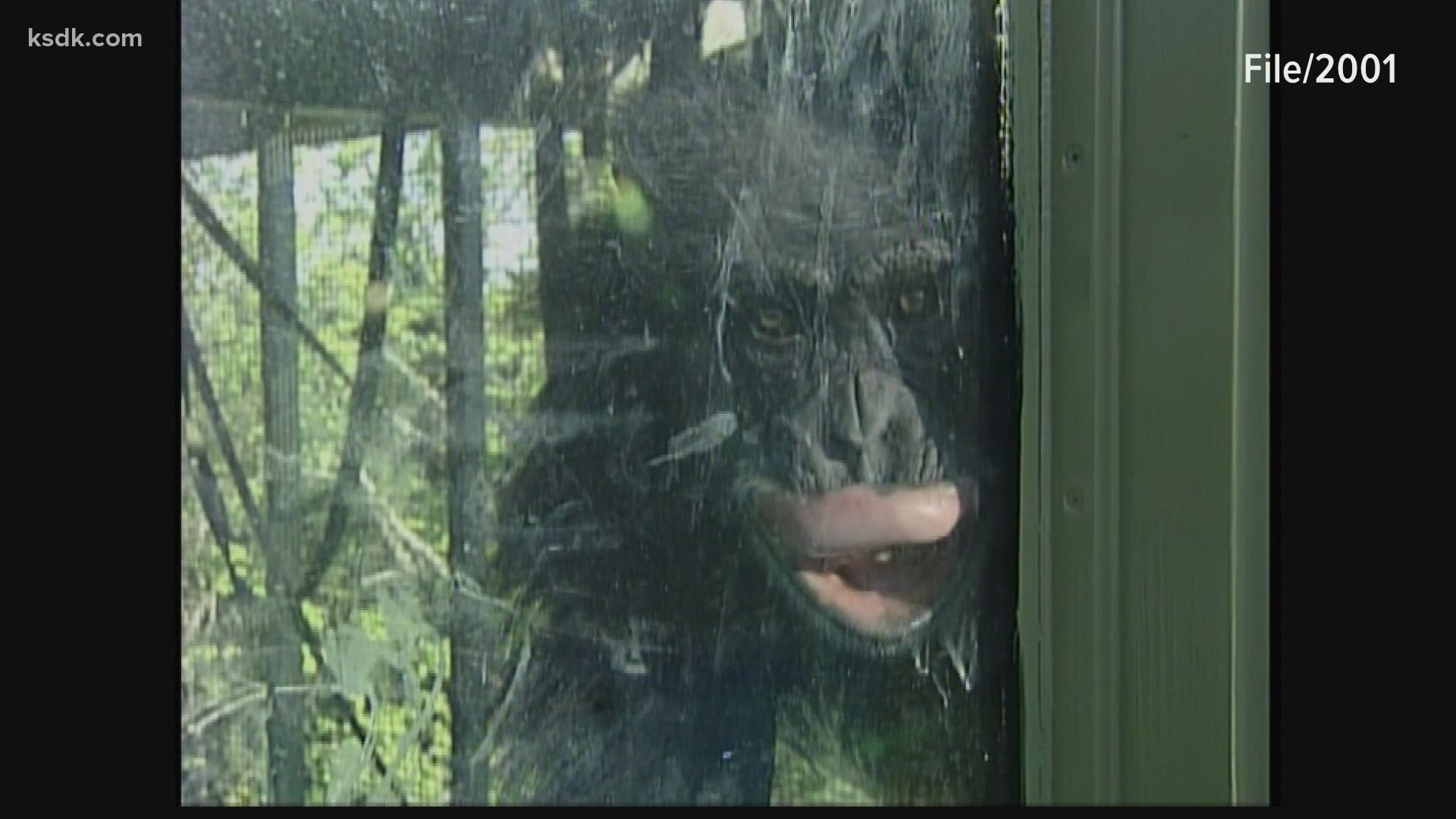 FESTUS, Mo. — After three escapes and at least two attacks, several chimps will be removed from a Festus home as part of an agreement with animal rights group PETA.

The I-Team spoke exclusively with the chimp's controversial longtime caretaker who is getting ready to open up a new facility for the endangered animals.

In Festus, spotting a chimp hasn't been as rare as it probably should be.

In June, drivers on Highway CC saw two chimps on the loose by the side of the road. In 2001, Jason Coates came face to face with three loose chimps at his parents' home in Festus.

He ended up shooting and killing one of them.

"It was like a horror movie," Coates recalled. "It was it was on its knuckles, like running at us.”

All of these chimps had escaped from the business next door. Connie Casey and her husband bred and sold chimps there for years through their business, Chimparty.

The Caseys rented out chimpanzees for parties, TV ads and movies from their farm on Highway CC. Some of the chimpanzees from Chimparty appeared in movies like "George of the Jungle," "Babe: Pig in the City," "Buddy," "MVP: Most Valuable Primate" and "Spy Mate." Some were even featured on Hallmark cards that may still be on store shelves today.

“Connie Casey’s ex-husband, the story goes, he walked into one of [the chimp] cages with an ice cream cone, and one of them jumped up and a bit his nose off. They're dangerous,” said Coates.

Years later, Chimparty would become a nonprofit called the Missouri Primate Foundation. In recent years, the foundation has lost its nonprofit status and the chimps remain in on the Festus property primarily as pets.

Since 2016, Casey’s Missouri Primate Foundation has been locked in a bitter lawsuit with PETA over allegations the chimps were held in unsanitary conditions, and not given proper food or medical care.

And then there are the escapes.

“I believe PETA hired people to come in and unlock those cages. I do believe it's a PETA tactic,” said Tonia Haddix, a longtime caretaker of the Festus chimps.

Haddix said she took over care of the animals about three to four years ago and even began living at the Casey property to do so.

PETA denies Haddix’s claim regarding the escapes. In a statement, a representative from PETA told the I-Team:

“According to previously published reports, Tonia Haddix already acknowledged that at least one of these escapes may have occurred because of the facility's own failure to lock an enclosure properly. This new conspiracy theory is false and defamatory, and it's clearly intended to deflect attention from the failures at this facility that have resulted not only in conditions that experts agree caused suffering but also in escapes that led to the death of one chimpanzee and a human injury, demonstrating that these complex individuals are continually at risk. Haddix will be receiving a cease and desist notice from our attorneys.”

As part of a consent order with PETA, four of the seven chimps remaining at the Festus property will be sent to the Center for Great Apes in Florida, an accredited sanctuary.

The agreement allows Haddix to keep the remaining three chimps if she starts her own nonprofit and meets certain housing and care guidelines within six months.

She will be required to hire a full-time chimpanzee caregiver, a part-time maintenance worker, and experienced volunteers.

Also per the agreement, Haddix and Casey may never again enter an enclosure with any chimpanzee or reach into an enclosure unless a veterinarian has chemically immobilized the chimpanzee.

“That makes no sense to me. You can keep on abusing the chimps just take them to a different place and abuse them someplace else. I don't think that's right,” said Coates.

Haddix said she was allowed to choose which chimps she was able to keep and that she chose the chimps based on the likelihood that the chimps that went would be successful to survive in a sanctuary setting.

“I just want to preserve those chimpanzees to private ownership until they pass away,” said Haddix.

Haddix has already broken ground on her new Stoddard county chimp facility. She calls the new organization Chimp Hope international. The chimps that will live there, Crystal, Mikayla, and Tonka, must be provided with a Primadome and night house, according to the PETA agreement. The female chimps must be on birth control as long as they're housed with the male chimp, and if Crystal or Mikayla give birth, the mother and baby chimp must be transferred to a different sanctuary.

“I have nothing to hide. I look forward to people getting to see these chimps progress and see how they adjust to moving from the only home they've ever known and for them to get to know the chimps,” said Haddix. “They really are amazing chimps.”

Haddix says the chimps will not be part of any type of roadside zoo or attraction.

Coats has his doubts. But he doesn't believe they'll be in Haddix’s care for long.

“I think she'll have a hard time putting together the funding and the things to do what the judge says," Coates said. "Ultimately I think it will just be a matter of time before they're in a proper sanctuary anyway."

As part of the agreement, Haddix and Casey can never again own or breed any other chimpanzees.