Highway pothole takes out 6 cars in one morning, drivers left with the bill

The pothole on a ramp from I-270 to I-44 was so big, one driver said it felt like the crater was a foot deep 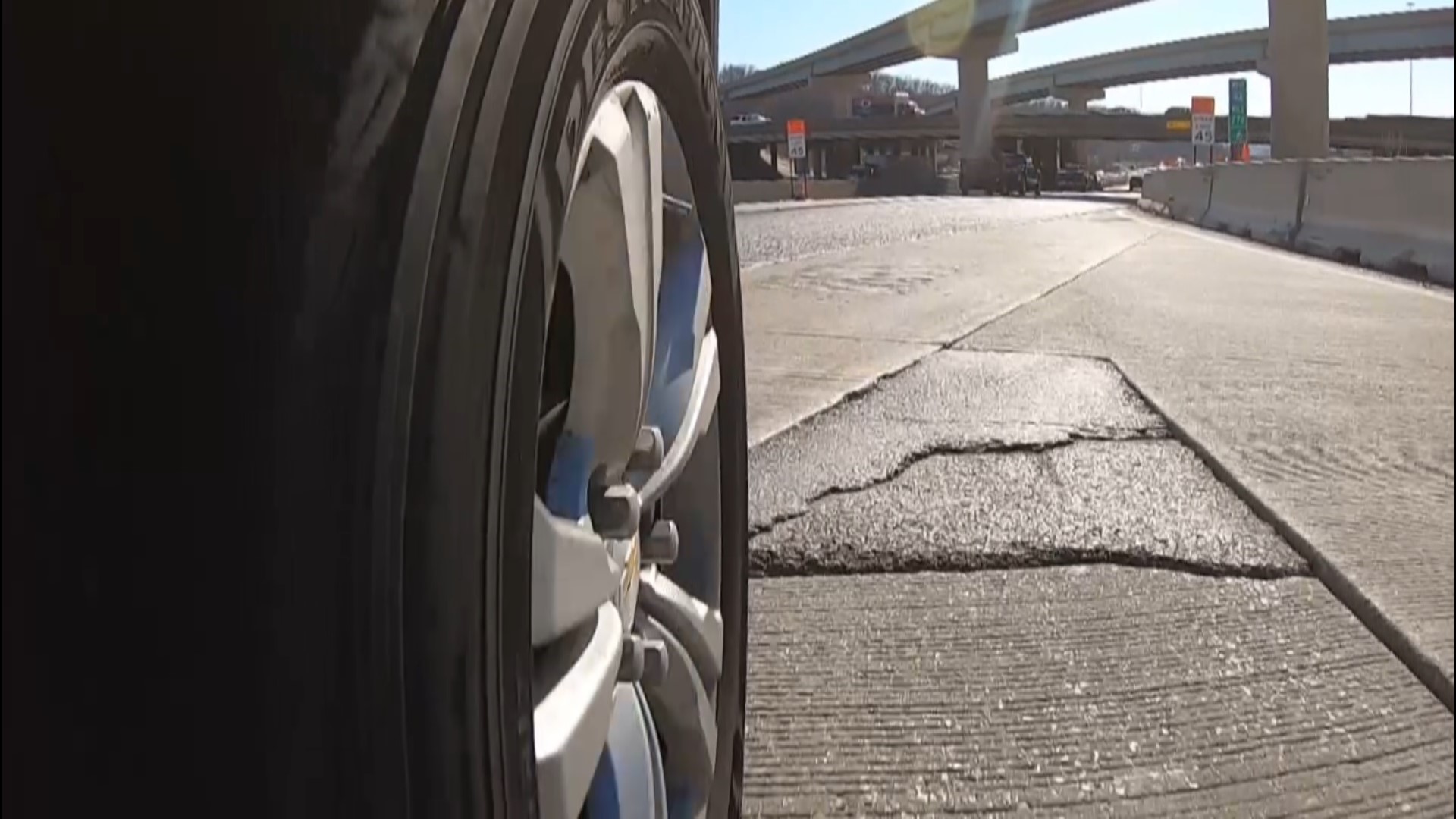 ST. LOUIS COUNTY, Mo. — It’s open season for potholes on the roads, and the Missouri Department of Transportation is on the hunt.

MoDOT’s “Pothole Patrol” is responsible for taking care of tire-killers all over the state. Sometimes they aren’t there in time to prevent a pothole from claiming a tire or suspension. So, who’s responsible for the damage? A half-dozen drivers are still trying to find out after one pothole took their cars off the road in a single morning.

“You kinda wince after you hear it,” Kittrell said. “That was just a really bad one. Where you go, 'Eeeee!'”

He was driving on the ramp that leads from northbound Interstate 270 to westbound Interstate 44 when he hit a pothole. He said it felt like the crater was a foot deep. The collision tore pieces of tire right off his new car.

Traci Poole went through something similar a week later. On Jan. 11, that same pothole popped two of Poole’s tires.

“It was so big, you couldn’t get around it,” she said. “I thought the whole car was going to break down.”

Poole pulled into the next service station she saw. Her boyfriend recorded what they saw when they arrived: more cars waiting for tow trucks, all victims of the same pothole.

“They were just lined up in front of the Road Ranger waiting for wreckers to come get them,” described Brian Baxter, who took the cell phone video.

Poole, Kittrell and five other drivers filed claims with MoDOT for the cost of fixing their cars, two of which had bills adding up to more than $1,500. MoDOT’s response surprised them.

“I did expect them to take some responsibility for the problem considering it is their road,” Kittrell said.

Instead, MoDOT denied all the drivers’ claims, saying that a contractor working on the nearby Meramec Bridge Project was responsible for maintaining that stretch of road. In the denial letter, MoDOT wrote, “During construction projects the contractor is responsible for … any claim arising from or out of the work area.”

The agency advised drivers to take their claims to the insurers for KCI Construction.

The drivers who contacted KCI got another denial letter. KCI's insurer said that it was “not conducting work on the roadway.”

The 5 On Your Side I-Team contacted KCI by phone and email, then showed up in person to get answers for the drivers. The company’s president, Tom Huster, said that he is discussing the claims with MoDOT.

A district engineer with MoDOT told the I-Team’s PJ Randhawa that MoDOT wants to make sure that KCI is reviewing claims before denying them.

As of Wednesday afternoon, a MoDOT representative said following a meeting with the contractor, KCI would review the claims that were denied and follow up with the claimants. KCI did not yet comment on reviewing the claims.

In the meantime, drivers are left with the bills. Poole is considering legal action. She thinks the damage was preventable if MoDOT knew about the risk.

“Even if they couldn't get out there right away, at least put up cones and block that area off so other people won't hit this huge, massive pothole. It was almost the size of the whole lane, you can't just go around,” she said.

MoDOT told the I-Team it first learned about the pothole when the Missouri State Highway Patrol reported it about two hours after Poole and Baxter pulled over. The agency sent crews out to patch it later the same day, just as Poole’s car was towed away.

Since both MoDOT and KCI point to the contractor as the reason they aren’t responsible, the I-Team requested a copy. MoDOT has not yet provided the document.

The pothole is still visible on the road after being patched up. If you notice it or any other potholes becoming severe enough to cause damage, you can report them to MoDOT with an online form. If the concern rises to the level of an emergency, you can call 1-888-275-6636.

You can use MoDOT's website to submit a claim for damage caused on the road. Damage caused by potholes on roads that MoDOT maintains may be reimbursed if MoDOT knew about the pothole and had enough time to repair it before the accident occurred.