'How many people does it take?!' | Potholes damage more than a dozen cars in MoDOT construction area

The contractor paid to maintain that area told the I-Team, they won't pay a dime to make it right 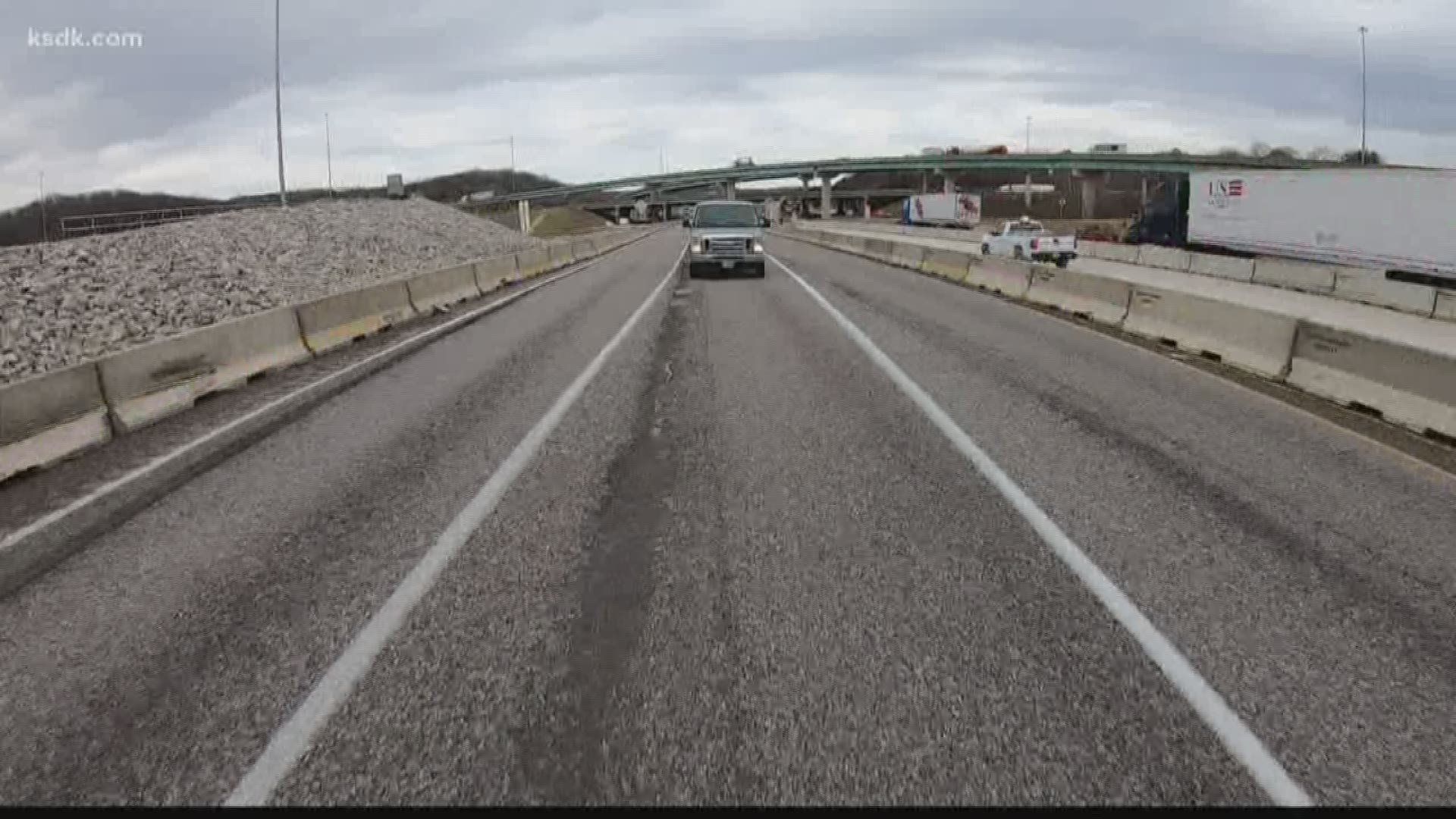 ST. LOUIS COUNTY, Mo. — More than a dozen drivers have damaged their cars by driving down a stretch of Missouri interstate. Now, the company paid to maintain that area told the 5 On Your Side I-Team, they won't pay a dime to make it right.

The concern centers in the Meramec Bridge Replacement project on I-44 and I-270. Drivers told us your car may not have made it off the road in one piece.

The I-Team found more than a dozen claims filed with the Missouri Department of Transportation by drivers who said their vehicles were damaged by giant potholes on a stretch of the project by westbound I-44 and northbound I-270.

READ MORE: Highway pothole takes out 6 cars in one morning, drivers left with the bill

Those potholes caused thousands of dollars in damage and drivers are getting stuck with the bills. Worse, many drivers told us they feared the outcome could've been much more dangerous.

"I could've lost control of the car, and there was a tractor trailer by us," said Traci Poole, who hit a giant pothole in the area early one Saturday morning in January.

"It's a huge hole in the road," said Kyle Kittrell, who damaged his tires by hitting a pothole a week before Poole.

"I couldn't believe it. I mean how many people does it take?" asked Ken Vuylsteke. He drives through the construction area almost every day.

Months before Poole and Kittrell hit a giant pothole there in January, Vuylsteke blew out two of his tires on a different giant pothole in the same area in October.

"All of a sudden, I felt like the right side of my car had dropped completely off the road," said Vuylsteke.

He and at least seven other drivers hit the same giant pothole that October day.

Watch our original report here or by clicking play on the video below.

MoDOT told the drivers it wasn't their responsibility. When they hire a contractor to complete a construction project, the responsibility of maintaining the road falls on the contractor. In this case, that's KCI Construction.

Unlike Poole, Kittrell and at least seven other drivers who damaged their vehicles on a pothole in that area in January, Vuylsteke said his damage claim was paid. And he wasn't alone.

The I-Team learned the claims of at least six other drivers who hit a pothole in the construction zone in October were approved.

"I got paid immediately, and I know why. I'm not proud of it. I'm a lawyer; they saw me as a problem. The average person doesn't have a law degree, can't go into court," said Vuylsteke.

The I-Team sat down with Tom Huster, the president of KCI Construction to find out why. Here's a transcript of our questions and Huster's answers:

I-Team: Why can't you go to your insurance company and ask them to treat these people fairly, treat them like they treated the people in October who got money for their damage?

Huster: The one that happened in January, we/MoDOT were made aware of it on a Saturday morning, is my understanding, and it was fixed in a few hours. We're under contract to fix potholes in a reasonable amount of time. The ones in October, from what I found out, we knew about them and we didn't fix them in a reasonable amount of time," said Huster.

I-Team: Who's responsible for making sure this road is safe? MoDOT said it's you.

Huster: Define "making sure it's safe."

The I-Team gave Hustera a copy of MoDOT's Contractor Standard Specifications, which states the roads should be "free of holes, ruts and detrimental surface deformations".

I-Team: Are you honoring this?

I-Team: And yet people are incurring thousands of dollars in damage driving through this area, an area you're being paid to take care of.

Huster: Yes. I mean I don't know how else to phrase it.  We inspect the road at least once a day, and whatever potholes we find we take care of."

I-Team: What do you plan to do for these drivers who damaged their vehicles, arguably, through your company's negligence?

Huster: That's where we disagree. I don't think it was our company's negligence that caused this pothole.

Huster told us KCI will be putting a temporary layer of asphalt over the entire area this weekend to help smooth things over. That plan isn't doing much to put Vuylsteke's fears to rest.

"KCI is a big company. They have insurance. They can put pressure on their own insurance company. It's bad publicity for KCI to create dangers for the public. At least they could do when that has happened, is come forward and tell their insurance company, 'Be fair with these people, pay them properly.' Just like they paid my claim... But then again, I'm an attorney," said Vuylsteke.

Just a day after our first report aired, a frustrated driver from Ballwin reached out to tell the I-Team she blew out her tire after hitting a pothole in that stretch driving home from a Blues game.

She's adding her name to the list of drivers hoping to get money for damage to their cars.

In a statement, MoDOT told us:

"MoDOT is working with the contractor to remove and replace some asphalt within the project limits (what is called a mill and fill) – we are sharing the cost with the contractor. MoDOT is committed to ensure that Missouri maintained roadways are safe and reliable, as that is our primary mission."

Huster said KCI has filled more than 100 potholes in the area in the past several months, and they will continue to do so.