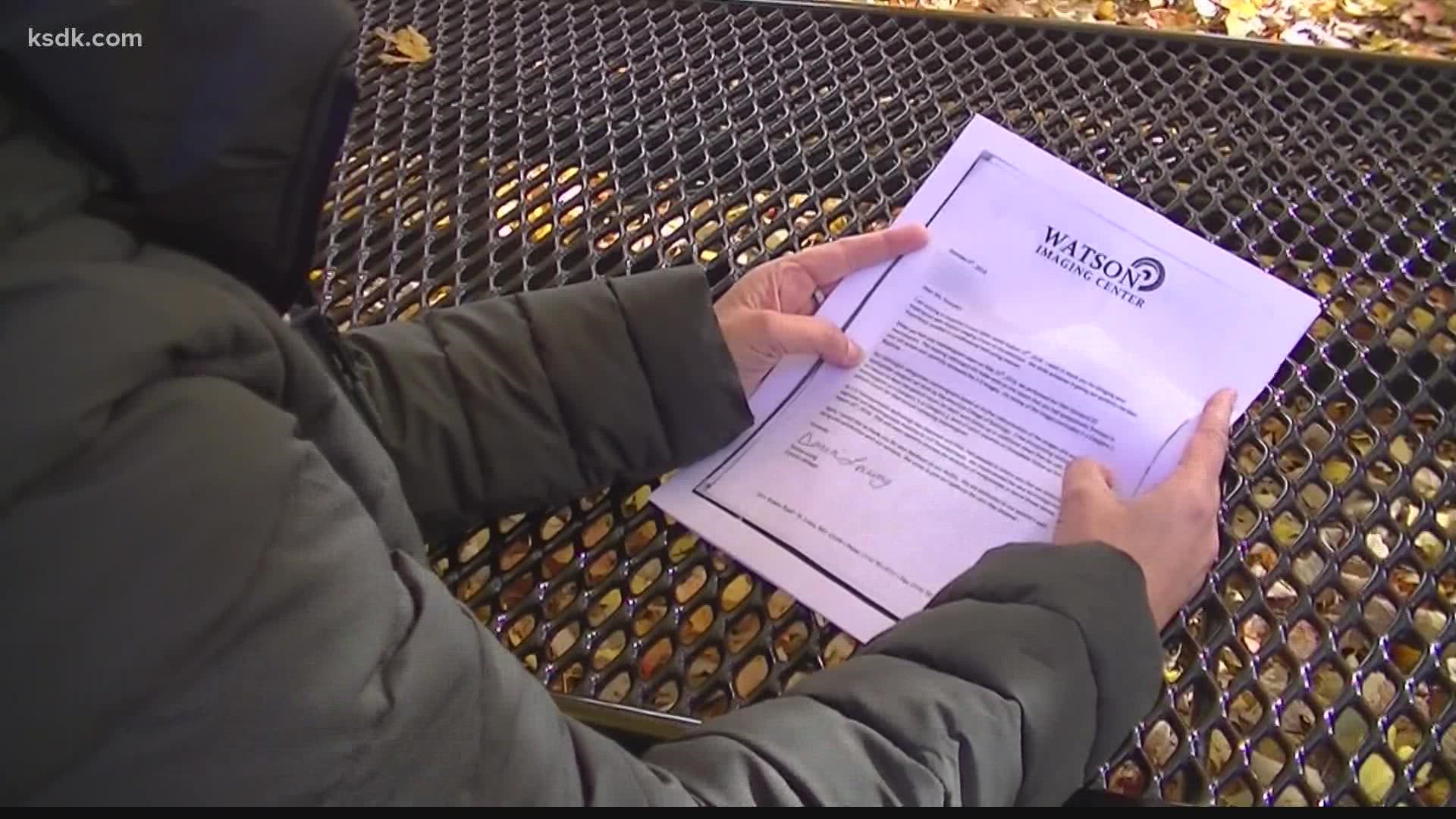 ST. LOUIS — This summer, thousands of patients who received mammograms at Watson Imaging Center in South City found out that quality issues have called years of screenings into question. An inspection conducted by the American College of Radiology resulted in more than two years of mammogram results being invalidated.

When the I-Team reported on FDA action at the center, viewers reached out with concerns that even more people could be affected.

One of those former patients from Watson Imaging Center is Sharon Munden. She has a family history of breast cancer, so when she found a lump and noticed inflammation on her breast in May 2018, she knew a mammogram was in order.

“I have a maternal aunt who has had multiple recurrences of breast cancer,” said Munden. “My mom actually was diagnosed.”

In 2011, Jane Thomson said she had many of the same symptoms. “The night that I felt the lump on my breast, it was a Friday night and I started calling right away,” she told the I-Team.

Their first step was a mammogram at Watson Imaging Center. Another thing Munden and Thomson share was that they wanted the screening staff to see exactly why they were concerned.

“Something was wrong, something was there,” remembered Thomson. “I told them where the lump was and [the staff member] felt it.”

“I mentioned my symptoms to her and she made a note of it, and actually commented on the fact that she could see the visual symptoms as well. So I was feeling pretty confident that they were going to take my experience seriously,” said Munden. “It was after that, that my opinion changed pretty dramatically.”

"A false sense of security"

Looking back, they both say that their choice of screening provider could have cost them their lives. That’s because Watson sent both women letters from doctors that stated their mammograms showed “no evidence of cancer.”

“It is a sense of relief and it's like the worst that could possibly happen, isn't happening,” said Munden. Her relief wouldn’t last long. “Within a week and a half of the scan itself,” she adds, “I got my cancer diagnosis.” Munden's cancer was already past the early stages.

Thomson shares this in common with Munden as well. The bad news from her second opinion came eight days after her screening at Watson: “She called me on March 16, 2011, said I had breast cancer.”

When her doctor detected cancer, it was already in stage three, meaning that it had begun to spread.

Thomson even followed up with Watson after that news. “I called the doctor. He said they should have done a biopsy that day,” she recalled.

Dr. Greg Cizek, who signed off on Thomson’s scan, told the I-Team that he only filled in at Watson Imaging when they were short-staffed. While he didn’t remember Thomson’s case, he said nearly 20 percent of all cancers are not seen on a mammogram.

Watson’s radiology reports stated Thomson’s mammograms showed “no malignant mass.” Just days later, her doctor wrote, “There is an easily palpable mass in the left breast,” and expressed concern that her first mammogram “did not show any findings, as [the mass] is quite prominent."

Munden informed Watson of her diagnosis as well, in a letter, and got a reply from practice manager Denice Loving, who wrote that “The reading radiologist did make note on the report that you had symptomatic firmness in your left breast and carefully reviewed the 2-D images.” The radiologist concluded that the images fell into Category 1, “which requires no immediate follow-up.”

When the I-Team talked to Watson’s practice manager, Denice Loving, she told 5 On Your Side’s PJ Randhawa that the center had received no reports of mammograms that missed cancer.

“I wish they would have talked to me about the need for a diagnostic mammogram. I wish that my results would have been, not negative, but inconclusive,” said Munden. “I asked them to review other patient files in case there were circumstances like mine that a diagnosis might have been missed.”

A review of Watson’s past mammograms would eventually happen in 2021, conducted by the American College of Radiology and surveying dozens of reports going back to 2019.

The result was that the FDA forced Watson to stop performing mammograms immediately due to “image quality" issues.

The three women who spoke with 5 On Your Side about cancer diagnoses they say were delayed by a mammogram at Watson never received a letter about their results, because the ACR review didn’t extend that far.

Where you get your mammogram matters

Thomson and Munden are now cancer-free. They are urging women to get their yearly mammograms at a breast health center and not to ignore other symptoms if their mammograms come back clear.

Additional questions to the FDA and ACR about what prompted the review of Watson Imaging’s results or whether the facility will be able to provide mammograms again were not answered.

The Missouri Department of Health and Senior Services also inspects mammography facilities in the state. Their representative wrote that DHSS has received no mammography complaints about Watson Imaging Center. “After we were notified that FDA had taken this action in July, [the Missouri Radiation Control Program] contacted the facility to verify they had ceased performing mammography and understood they would not be permitted to resume until they satisfied FDA’s and ACR’s concerns, and had notified DHSS also,” they wrote.

What to Do For a Mammogram Quality Complaint

The FDA website for the MQSA tells consumers that facilities must have a system in place to address complaints.

Warning letters and documented actions against other mammogram providers are available on the FDA website. The FDA declined to comment on the action against Watson and has not published a warning letter. The decision to publish a warning letter, according to the FDA compliance program manual, is based on a review of the inspection, correspondence with the facility, and history of MQSA violations.