Illinois doesn't burn sewage anymore. So why is MSD burning sewage less than a mile from three Elementary Schools? And why do they tell our I-Team burning sewage is the "most environmentally friendly option"? 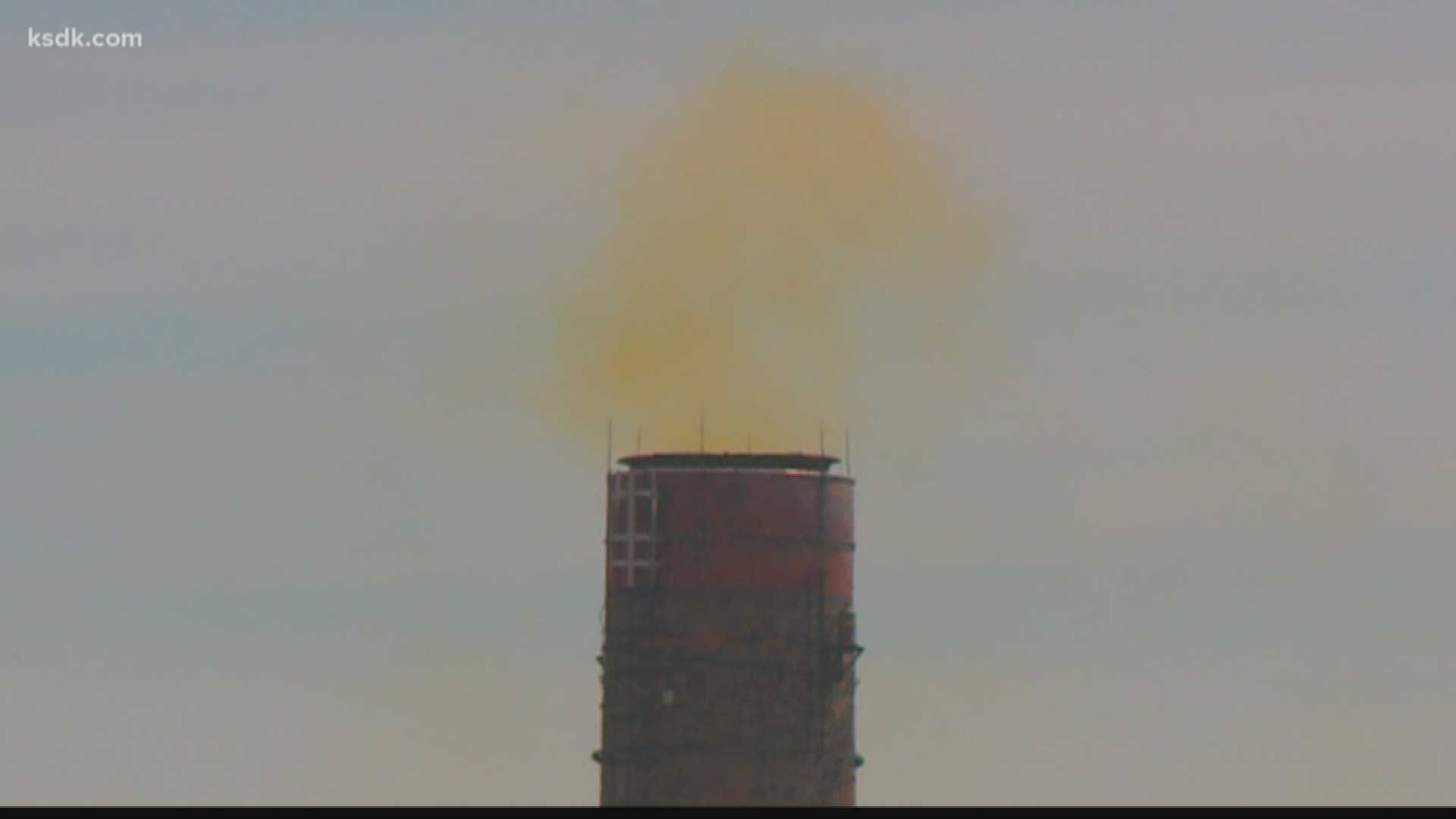 You can drive by it every day and not even notice it, but environmental activists say that it’s having an impact on the health of thousands of St. Louisians.

The I-Team found a smokestack off I-70 near downtown is burning thousands of pounds of sewage every year.

And it’s less than a mile from three elementary schools.

We’re talking about a Metropolitan Sewer District smokestack at the Bissell Point Wastewater Treatment Plant. The smokestack is connected to a sewage sludge incinerator system.

The plant uses incinerators to burn household sewage sludge as well as sewage from commercial clients like hospitals, chemical manufacturers and the Bridgeton Landfill.

And MSD told the state last year that its emissions include arsenic, benzene, chromium, formaldehyde and mercury.

“It kind of smells like a sewer when you get close into MSD,” said Doug Eller, a local activist and a resident of north St. Louis. “That is part of what we are smelling right now and breathing in.”

“They’re burning stuff over there, we don’t know what it is," said Derric Hopkins, father of young children that attend Clay Elementary school near the smokestack. "We breathe it every day, we live in this area. They should at least inform us of what they’re doing because we stay in the community.”

Eller raised concerns about the Bissell Point Wastewater Treatment Plant in 2018 when its permit to release pollutants into the air was up for public comment. He and the Missouri chapter of the NAACP, with the help of Great Rivers Environmental Law Center, submitted a letter to the Department of Natural Resources asking whether anything can be done about the yellow-green emissions that come from the plant.

“Not only are people in North St. Louis affected,” Eller said. “This blows Downtown. …We need to have a clean city record, not one of the cities that continually have air pollution issues all the time.”

“We Breathe It Every Day”

Downwind from Bissell Point, neighborhoods of north St. Louis have some of the highest rates of asthma in the state. More children in these neighborhoods go to the emergency room for asthma every year than almost anywhere else in the state. Asthma can be triggered or worsened by pollution. North city residents Derrick Hopkins and his daughter, Derrica, know it firsthand.

“I know how to deal with it because I’ve had it since I was a child. But with my child, I struggle with it. It’s difficult for her, she gets cold, she gets sick, struggles breathing,” he said. “You wake up and your kid can’t breathe. You try to cope with it the best you know how, but it’s like, what can you do?”

Emissions have an impact on health, experts say. Reagan Nelson with the Asthma and Allergy Foundation of St. Louis said that smokestacks, as well as car exhaust and mold, contribute to the challenging health situation in north St. Louis.

“Here in pockets of St. Louis, especially in the north, one in five kids have asthma,” she said. “Smokestacks that are putting smoke and other chemicals in the air go deep into our airways. The sensitive airways will start being triggered and start twitching and make it super hard to breath.”

The Environmental Protection Agency wrote in 2011 that reducing emissions from sewage sludge incinerators could reduce the health impacts associated with pollution, including asthma and early death.

Sewage sludge incinerators can put many kinds of pollutants into the air, including lead and other metals. The factors that the EPA focused on especially as contributing to asthma are sulfur oxides, nitrogen oxides and tiny particles that are just a fraction of the size of a human hair.

Emissions from the Bissell Point smokestack are monitored annually and reported to the state. Over the last ten years, the smokestack put an average of 11 tons of sulfur oxides, 24 tons of particulate matter, and 260 pounds of lead into the air every year.

MSD operates a second sewage sludge incinerator at the Lemay Treatment Plant. That facility is also just across the street from Hancock Elementary School.

The Most Environmentally Friendly Options

Emissions from MSD’s smokestacks fall within the state’s limits, and their former operations director, now director of information technology, Jonathon Sprague said that the plants’ locations are dictated by the landscape of the region.

“I think what we do is make sure we meet the limits that are put in place to protect by the EPA and that's what we do,” said Sprague. “Our limits are lower than they've ever been. So I think we're doing our job.”

“It still begs the question...why are they using this technology that allows, based on their own calculations, 21,000 tons of pollutants to be emitted into the air every year?” he said.

In 2012, the Department of Natural Resources declared that emissions exceeded the state’s limit for particulate matter during regular testing of the smokestacks at Bissell Point. MSD paid $1,500 in a consent order with the state.

Days after the I-Team’s PJ Randhawa sat down with Sprague, MSD released a video on social media about Bissell Point. In it, MSD’s assistant director of compliance, Jay Hoskins, said, “You might be surprised to learn incineration is one of the most environmentally friendly options.”

“The technology they use, multiple hearth incineration, is pretty much the most harmful to human health to people who are around these facilities,” he said. “These impacts are being focused in low income, and minority communities.”

By comparison, Illinois’s wastewater treatment plants don’t use incineration at all. The state department of health says that the state’s plants mostly use bacteria instead of burning or spread treated sewage as a supplement to soil.

Sprague told 5 On Your Side their analysis leads them to believe incineration is preferable.

“Ultimately we did an analysis, we’re not surrounded by farmers’ fields, we’re in the middle of a city,” he said. “We’ve looked at those options ... Sewage sludge incineration is actually just as environmentally friendly an option as land application, depending on where you are.”

Eller was skeptical of that decision.

In a consent agreement with the EPA, MSD committed to replacing its sewage sludge incinerators between 2021 and 2026 in order to remain in compliance with federal rules. At a meeting with the Missouri Clean Water Commission on April 29, 2019, the utility said that replacing both of the Bissell Point and Lemay incinerators with a different type of incineration “that substantially reduces emissions” would cost $340 million.

When asked directly what technology would replace the incinerators, Sprague declined to provide details about where MSD stood in the process of making that decision.