One doctor and 4.9 million addictive pills, now under federal investigation 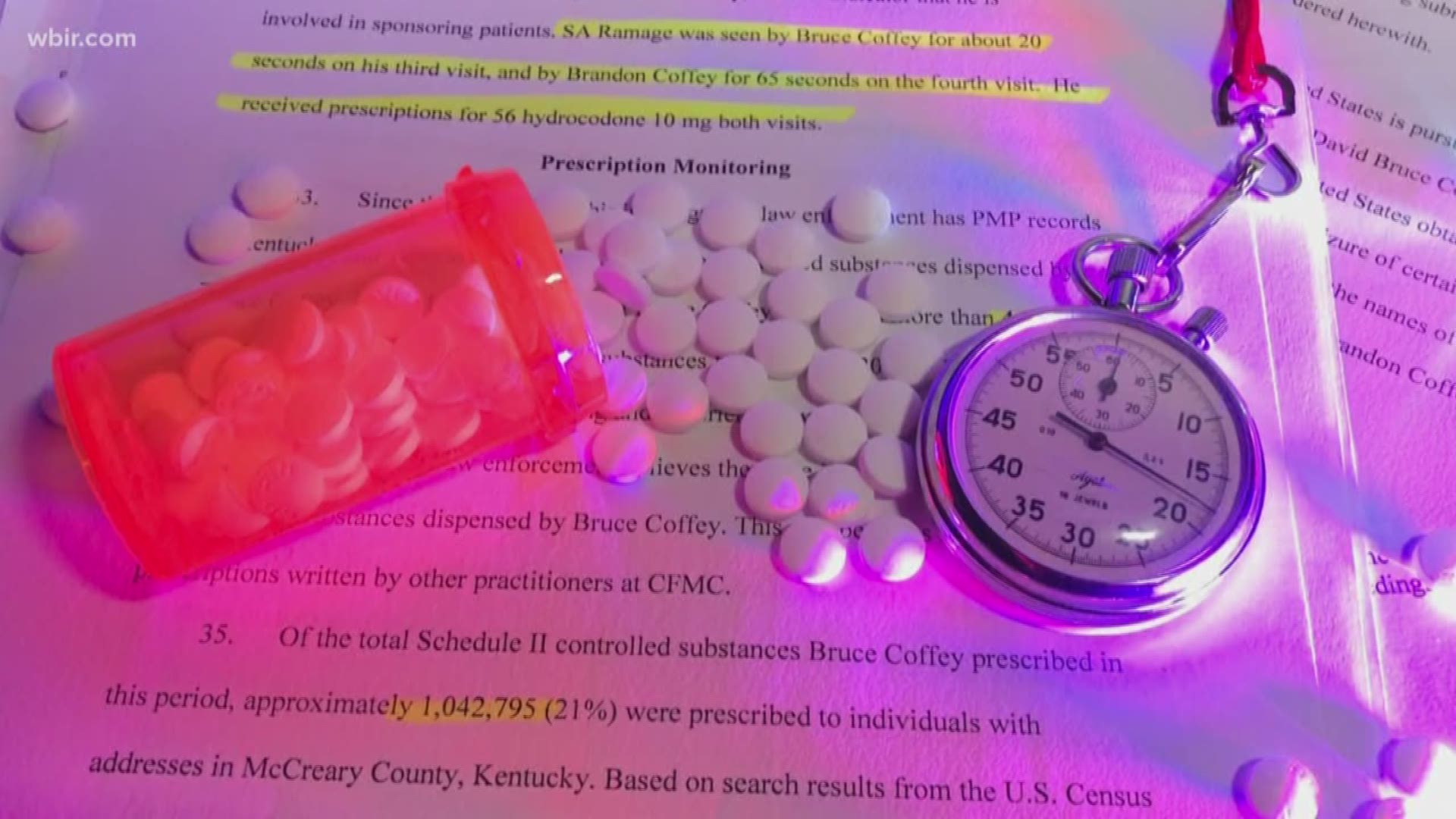 ONEIDA, Tenn. — Longtime Oneida doctor Bruce Coffey wrote bogus prescriptions, co-owned a pharmacy where many of the pills were sold and illegally laundered money he made from drug trafficking, the DEA alleged in a sworn affidavit filed in December in the Federal Court for the Eastern District of Kentucky.

Over an eight-year period, the DEA said Coffey handed out prescriptions for nearly five million schedule II narcotic pills--a rate of more than 1,640 addictive pills, such as Hydrocodone, per day.

The two-year investigation is ongoing and no charges have been filed.

In June, DEA and TBI agents raided Coffey's clinic that he operates with sons Brandon and Alex. The pharmacy next door, which the DEA said Coffey co-owned, was included in the raids. Documents suggest nearly half of narcotic prescriptions written at Coffey's clinics were filled at Mark's Family Pharmacy.

Attempts to reach the Coffey family were unsuccessful. Defense lawyer Greg Isaacs said he would consider sending a statement to 10News Thursday, but did not do so.

Brandon, Alex and Bruce Coffey all maintain their physician licenses with the Tennessee Department of Health.

The sworn affidavit from the DEA working the Coffey case paints a picture of a streamlined operation that formed the primary drug supply for traffickers in areas hard hit by the opioid epidemic.

In McCreary Co., KY, (pop. 18,306), Dr. Coffey prescribed more than a million addictive pills to patients over an eight year period--- enough for 15 pills for every man, woman and child in the county.

In undercover operations, law enforcement saw approximately 100 cars parked at Coffey's clinic. Suspected drug traffickers stood outside, while inside the wait for a visit was approximately six hours, the affidavit said.

On one visit, the undercover agent saw Dr. Brandon Coffey for approximately 50 seconds and was given a prescription for 56 hydrocodone pills, the affidavit said.

On another visit, Bruce Coffey examined the agent for 20 seconds before writing the same prescription, the DEA said.

While he waited for his brief encounter with the doctor, the undercover DEA agent saw Coffey's patients handing the leader of a suspected drug trafficking operation their prescriptions.

Coffey's office manager told the DEA it was not unusual for the clinic to see about 200 patients a day. To keep up with demand, a staff member told the DEA Coffey provided "pre-signed prescriptions for controlled substances for distribution to his patients when he was not in the clinic."

The DEA alleges the Coffeys prescribed pills to patients on days they themselves were traveling out of state.

The pharmacy next door

In 2017, the DEA said the pharmacy's orders of oxycodone increased.

A former patient interviewed as part of the DEA investigation said Bruce Coffey told her she "should fill her prescriptions at Mark's Family Pharmacy." 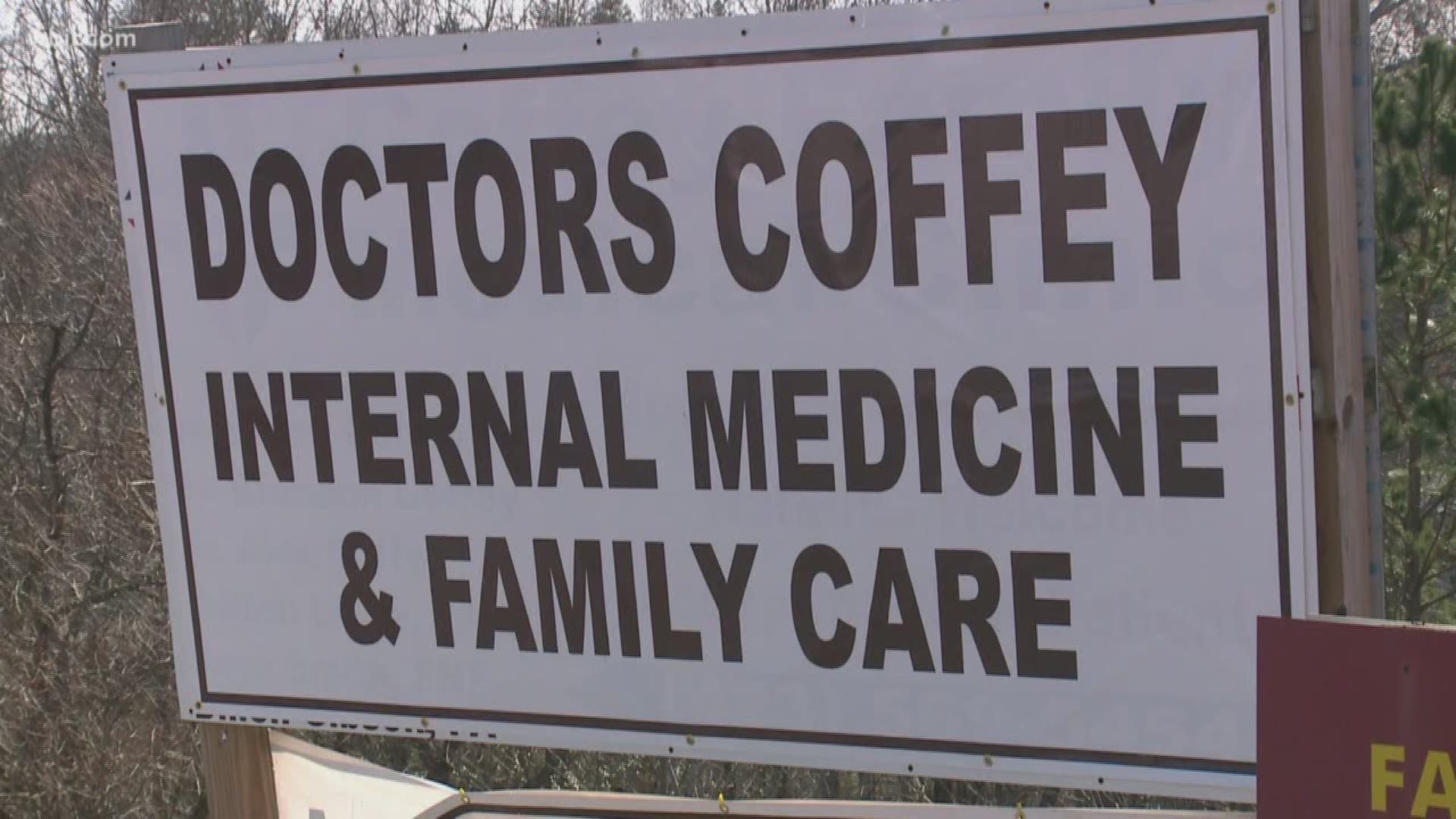 During the investigation, the DEA interviewed several patients of Coffey's clinic. In one traffic stop, a man said he was on his way to an appointment with Coffey. In his car, he had "more than 40 grams of crystal meth, an oxycodone tablet and a bottle of urine," the DEA affidavit alleged.

The man told investigators he had been seeing Coffey every two weeks for ten years and received prescriptions for 56 oxycodone pills every visit.

In March 2018, the DEA investigator interviewed a couple who both said they were patients of Coffey. One said she estimated half of the patients at Coffey's clinic were filling their prescriptions at Mark's Family Pharmacy.

"Bruce Coffey told her he does various procedures, e.g. X-rays, drug screens, and injections to 'keep them [law enforcement] off my back,'" the DEA affidavit says she told investigators.

Private and government insurance programs paid Coffey's clinic at least $18 million from 2012 to 2018.

Coffey personally pocketed at least $2.7 million, with more for his sons and in joint accounts with his wife.

In June 2018, federal seizure warrants were first served. Federal agents seized Coffey's two 2014 Mercedes-Benz GL450s and at least $1.3 million in cash from his bank accounts, plus $40 thousand in cash found at the Coffey Family Medical Clinic, among other seizures.

The DEA agent concludes Bruce and Brandon Coffey, along with others at their clinic "have engaged in the large-scale diversion of controlled substances by issues prescriptions outside the scope of professional practice and not for a legitimate medical purpose, as well as laundered the proceeds of that drug trafficking."

"You would have to be very, very foolish not to think there will be significant criminal charges in the very near future," defense attorney T. Scott Jones said.

Jones reviewed the sworn affidavit on behalf of 10News. He is not otherwise involved in the case.

"I mean it’s obvious when you read the affidavits that it wasn’t just something assembled overnight and it’s not just merely baseless allegations," he said. "We’re tired of pill mill-type operations addicting members of our country and the Feds likewise are taking a heavy-handed examination of this and they’re not going to tolerate it."