Laws like one passed in Jefferson County in 2010 are supposed to reassure buyers that they won’t be moving into a health hazard. So why isn't the county following their own law? 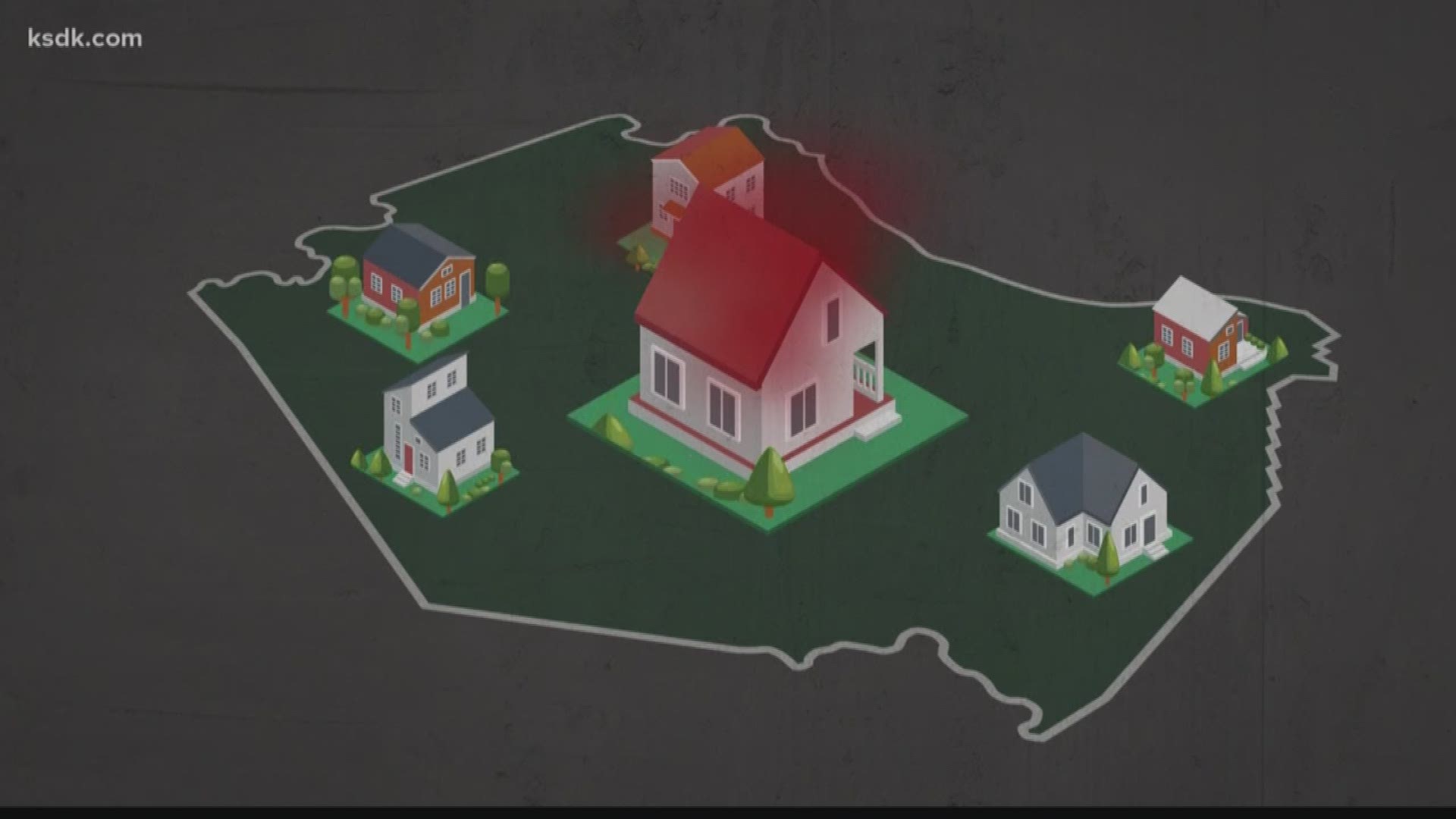 Protecting your family means doing your due diligence when you’re buying a house: getting an inspection, testing for radon and mold. In some areas of Missouri, there are so many homes that once housed methamphetamine labs that checking the DEA’s website is a recommended step, too.

That’s what Sydney Holst did, at her coworkers’ recommendation. She was house-hunting in Jefferson County and found an unusual house, a unique “dome home” in a peaceful area on Candy Lane.

“I liked the uniqueness of it but it seemed like it needed some exterior cosmetic improvements. That was my initial thought but I liked the setting, the land, all of that,” Holst said. “I did a Google search with the address and the word meth came up in the Google search.”

One of the results in that search was an investigation by the KSDK I-Team, about people who were never told they bought homes where police found meth labs.

When Holst reached out to the I-Team, Investigative Reporter PJ Randhawa recognized the home Holst wanted to buy. The seller had yet to tell Holst what PJ told them just last year: that the address was on a list of properties where police reported finding meth labs.

Certain hard-hit counties are trying to protect homebuyers by making information on where they found drug labs public, and requiring clean-up if tests show the homes are contaminated. Laws like one passed in Jefferson County in 2010 are supposed to reassure buyers like Holst that they won’t be moving into a health hazard. The chemicals used in producing meth that can linger in drywall, wood, and air vents are linked to health issues down the road for anyone exposed to them over time. The new owners of the dome home told PJ last year that they wondered if the lab’s contamination caused their own recent health problems.

Holst wasn’t ready to give up. “I did research on that, and we decided that if we could find proof that it was cleaned out, decontaminated and tested afterward, then it was something that we would seriously consider,” she said.

Fallout from a crisis

Jefferson County went above and beyond the state requirement that sellers must disclose whether a house ever contained a meth lab. The county’s ordinances require police to test any home where they find meth-making materials for contamination. That house must be condemned or professionally cleaned if any surface in the home contains as little as 1.5 micrograms of methamphetamine on a surface about as large as the palm of your hand.

The month after that ordinance passed, Jefferson County Sheriff’s Department officers responded to a call at the dome home on Candy Lane and reported that they found evidence of a drug lab, including coffee filters containing white residue, tubing, and gallons of chemicals often associated with making meth. They seized 58 pounds of materials for disposal.

“The narcotic sergeant is the only one who actually got back to me, and he said for that particular house, nothing that he had said that a cleanup was ordered,” said Holst. “That it is up to the homeowner, is what he said. And I said well, since this is a foreclosure home, do you know what would happen in that case? And he said no.”

Holst followed the chain of the home’s owners, asking each whether they knew if the home was ever tested or cleaned. Nobody had records for her: not the bank, Housing and Urban Development, Jefferson County Sheriff’s Office, or the county’s building division.

“There's a chance we weren't ready”

The police report for the lab seizure on Candy Lane doesn’t say that anyone administered the surface test. In fact, police failed to report test results at homes with reported drug labs for six months after the ordinance passed. And the county’s building division gave the I-Team documents that show no homes were slated for cleanup for at least a year after the ordinance passed.

“There's a chance we weren't ready for the procedure yet. Test kits weren't ordered, we didn't have the capability to follow the ordinance directly with the closeness to the time the ordinance being passed to the time this meth lab was found,” said Tony Dennis, drug task force commander for the Jefferson County Sheriff’s Office.

The I-Team found that hundreds of homes where police found evidence of meth labs have no documentation of testing or cleaning. Hundreds of homes like the dome home on Candy Lane may have gone on to be sold to families who didn’t know about the chemicals they may be exposed to.

“Every home is eventually going to be rented out or sold in its life. With the amount we were chasing, the meth labs we were finding in the early 2000-teens, yeah,” said Dennis. “A lot of these homes are going up for sale or rent now.”

For homeowners and homebuyers who find themselves in homes with labs reported after the ordinance passed, but without evidence that they were tested or cleaned, there is no easy fix from the county.

When asked why the ordinance wasn’t followed for as much as a year after it was passed, the county’s director of code enforcement, Eric Larson, offered no solutions.

“I can't speak to what happened nine years ago,” said Larson. About the home on Candy Lane, he added, “What I can tell you is that that report probably didn't make it to my office and that is nobody's fault today, it’s just something that didn't make it to our office in 2010.”

Dennis also didn’t have a fix for homeowners and buyers looking into the history of these homes after the ordinance passed. “The people that are responsible are the people who are cooking meth in these properties,” he said.

For Holst, the only way to know whether the home is still contaminated would be to pay for a test from a private firm, Larson said. She’s decided to move on from the dome home. And whatever home she chooses to pursue next, she said, “I would have a meth test done on the home, along with inspections.”

What about your home?

Last year, the I-Team’s PJ Randhawa discovered that many homeowners in the St. Louis area were never told that police had reported meth labs in the properties they bought. The Drug Enforcement Agency and certain county sheriff’s offices publish lists of the properties where police say drug labs existed.

You can find an interactive map in that story by clicking here.

If your home is on the map as a former drug lab, you may be able to sue the seller if they failed to disclose the presence of the lab.

Finding out whether the property was tested, or cleaned, is more difficult. If the home is in a county that requires cleanup, the county’s building division should be able to say whether a property was ever tested or cleaned. A police report from the discovery of the lab or materials will also indicate where the contamination might be and whether the responding agency performed a surface test.

Have you seen your home on a list of clandestine drug lab sites? The I-Team wants to hear your story and help you get answers about your property. Send us a message at 5onyourside@ksdk.com or leave your tip at the I-Team inbox at 314-444-5231.