Investigation into East St. Louis incinerators still up in the air 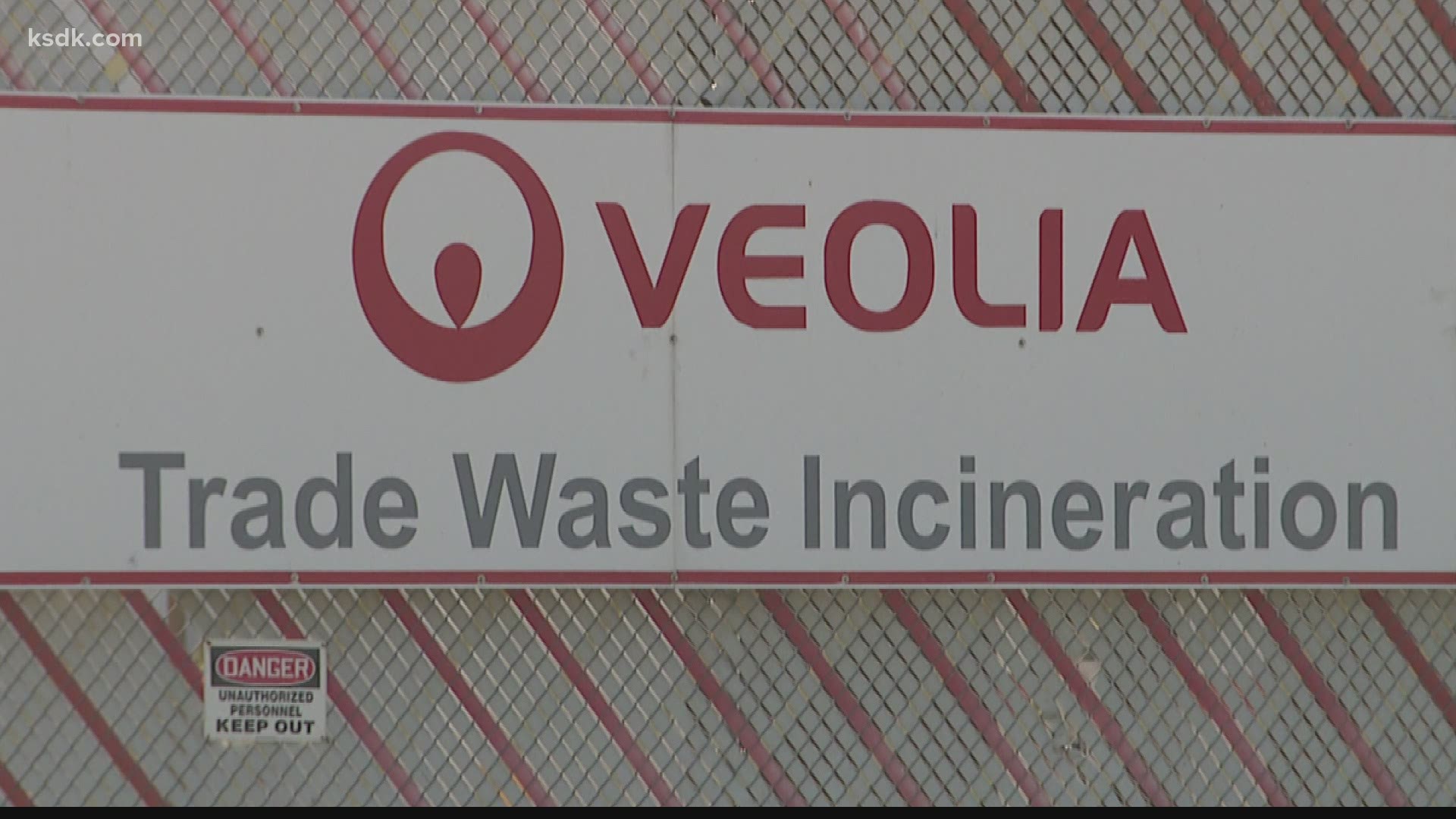 SAUGET, Ill. — In some of St. Louis’s most historic neighborhoods, residents say there's something in the air.

“I just saw this haze start to roll over the playground. And I smelled the smell like it was awful. It's like a mix of sewage and gunpowder,” said Ben Shannon, a Lafayette Square resident.

Shannon first noticed the haze several months ago. His neighbors in Soulard and Tower Grove have been complaining about similar smells for more than a year.

“I knew it wasn't natural. So we just got out of there and went home and unfortunately, it kept coming back,” said Shannon. “I heard based on that research that it's probably from that hazardous waste plant.”

He and his neighbors online have been talking specifically about Veolia ES Technical Solutions, a hazardous waste incineration facility in Sauget, Illinois.

Even though it sits across the river, residents around south St. Louis have speculated that it is the source of the smell they notice off and on throughout the year.

It is also one of eight facilities described in a lawsuit filed this year by environmental activists who are concerned about what could be burned there.

As a hazardous waste disposal facility, the Veolia incinerators can accept waste from Superfund sites, laboratories, and pharmaceutical companies. According to their permit, the waste they burn contains lead, mercury, and arsenic. The Veolia website specifically calls some of the waste they handle irritating, explosive, and poisonous.

Dr. Ken Haller, a pediatrician with SSM Cardinal Glennon Children’s Hospital, is familiar with the incinerators and other sources of environmental hazards in East St. Louis.

“It has been shown the kids who live near these sorts of facilities can have higher lead levels of heavy metal contamination and that can have a lifelong terrible health effect,” said Haller. Those effects, he added, include “profound effects on their lifelong IQ on their cognitive development on their emotional development.”

The I-Team has been looking into the incinerators since last summer when investigative reporter PJ Randhawa interviewed Mamie Cosey. She and her children live close to Veolia’s facility. Cosey believed that it was having an effect on their health.

“My kids are sick. I would say that my younger child, the 12-year-old recently within the last year developed asthma,” said Cosey. “It hasn't been told what they're burning and that's what we need to know”

Veolia declined to tell the I-Team specifically what it is contracted to incinerate in Sauget. Its representative wrote, “The facility handles a wide variety of materials, including common household waste such as paint and aerosol cans, as well as waste generated by universities and manufacturing facilities. We do not handle medical waste or radioactive material.”

According to an EPA report, models of the possible reach of particles from the Sauget facility showed concentrations as much as three miles away on the St. Louis side of the river could be more than a tenth of the maximum concentration at the site.

Senator Tammy Duckworth (D-Ill.) responded to constituent concerns last year by writing a letter to the CDC’s Agency for Toxic Substances and Disease Registry (ATSDR), asking for an investigation into whether the Veolia facility posed a public health risk.

“It is in your backyard. You just don't know it,” said Duckworth. “For the families that live around that area, you don't even know what's going into the air that you're breathing, what your kids are breathing.”

The CDC responded with a promise to start a preliminary investigation into the Sauget incinerators.

More than a year later, a representative of ATSDR wrote that it is still in the preliminary stages of responding to the petition. The agency wrote:

“ATSDR received a petition to investigate possible health impacts of the Veolia Waste Incinerator in Sauget, IL.  In the petition process, ATSDR gathers tools and information from the community, other federal, state, and local environmental and public health partners to evaluate:

“1) whether there are chemicals in the community,

"2) if the community is being exposed to those chemicals (the chemical is getting into people’s bodies), and

"3) if the chemicals could affect the health of the community.

“If enough information is available about chemicals related to the Veolia Waste Incinerator, ATSDR will inform the community of what we found and detail our actions to protect health. We anticipate completion of the petition response in the Winter of 2021.”

Veolia North America confirmed to the I-Team that it has not been contacted by ATSDR or the CDC. The representative added, “There is absolutely no evidence to support this investigation … We welcome the opportunity to show how the facility is meeting or exceeding all environmental regulations as part of our commitment to the health and well-being of our community.”

“Because of COVID-19, the inspections have now been delayed and delayed, again and again. I've been waiting for the results. And meanwhile, people are still living there. Children are still breathing in that air. People are still going to have harmful effects that may occur for the rest of their lives,” said Duckworth.

Now, something more dangerous could come to Sauget’s skies. According to a lawsuit filed in February, Veolia’s incinerators in Sauget are one of eight facilities in the country authorized by the US Department of Defense to dispose of firefighting foam containing per- and polyfluoroalkyl substances, or PFAS.

The EPA has taken an interest in PFAS recently because they are so persistent in the environment and in the human body.

“This is a class of chemicals that are thought of as like forever compounds. Once they get into your body. They don't get out,” said Haller. “It does seem to have an effect on causing high rates of kidney and testicular cancer, thyroid disease problems with cholesterol damage to the liver.”

Back on the Missouri side of the river, mounting concerns about the smell make Shannon consider moving out of the city, farther away from the mysterious emissions.

“Are there toxic metals? Is there, you know, lead mercury that we're inhaling? I mean, I just don't feel safe for my son. I just I'm really concerned about, you know, him having a good life here and, you know, not breathing poison in the air,” said Shannon.

In a statement, Veolia NA tells the I-Team it has no plans to start incinerating PFAS-containing firefighting foam. The company also wrote:

“VNA's incredibly strong compliance history at our Sauget facility speaks for itself. This year the EPA endorsed the facility’s record by granting a final Clean Air Act permit. The facility has been inspected multiple times over the last 10 years by both EPA Land and Air Divisions relative to our compliance with the Clean Air Act and RCRA regulations. The facility has received no enforcement final actions as a result of these inspections nor entered into any consent decrees with EPA, which are typically used to resolve violations. In addition, there are no pending violation notices or compliance actions against the facility. In short, we have been diligent about making sure the facility does not contribute to environmental problems in the area, and we are confident that the source of recent complaints about odor and air quality is not connected to our facility.

“We have enhanced our screening criteria of incoming materials including a thorough laboratory analysis. Contrary to concerns expressed about relaxed pollution controls, we have worked collaboratively with regulatory authorities and in fact further enhanced pollution controls at the site, including the addition of a carbon injection system. Air emission levels have not increased at the site, and we are well below allowed thresholds.

“It should be pointed out that VNA’s Sauget facility is located in a heavy industrial zone surrounded by other industrial facilities including numerous sewage treatment plants in the St. Louis Metro East area. We welcome a thorough inspection of our facility but also feel it might be prudent to expand the investigation beyond our location to determine the source of public complaints.

“VNA has strict odor control protocols in place throughout the facility, not only for the well-being of our community neighbors, but also for our employees. Routine operations at the plant do not generate emissions/odors. Any emissions and/or odors are managed by the site's air pollution control systems. Employees are required to wear personal protective equipment depending on the task being performed, per OSHA standards.

“VNA is committed to being a good neighbor to the people who live in our surrounding communities. Over the years, we have participated in various community-based efforts including a blood drive with the American Red Cross just last week. We also work closely with local police and fire departments. Additionally, we are currently investing more than $2 million in systems to ensure the highest quality operation of the plant and we will continue to do so. We also have a strong focus on recruiting and hiring people who live in the area. We will continue to work with the appropriate health and environmental regulatory agencies to ensure that those who live and work near this facility understand the essential service we provide in Sauget.”