They're required to fix up abandoned, blighted homes. So why isn't all the work getting done?

A 5 On Your Side I-Team investigation found that in recent years, very few owners are following through with the redevelopment that's required of them. 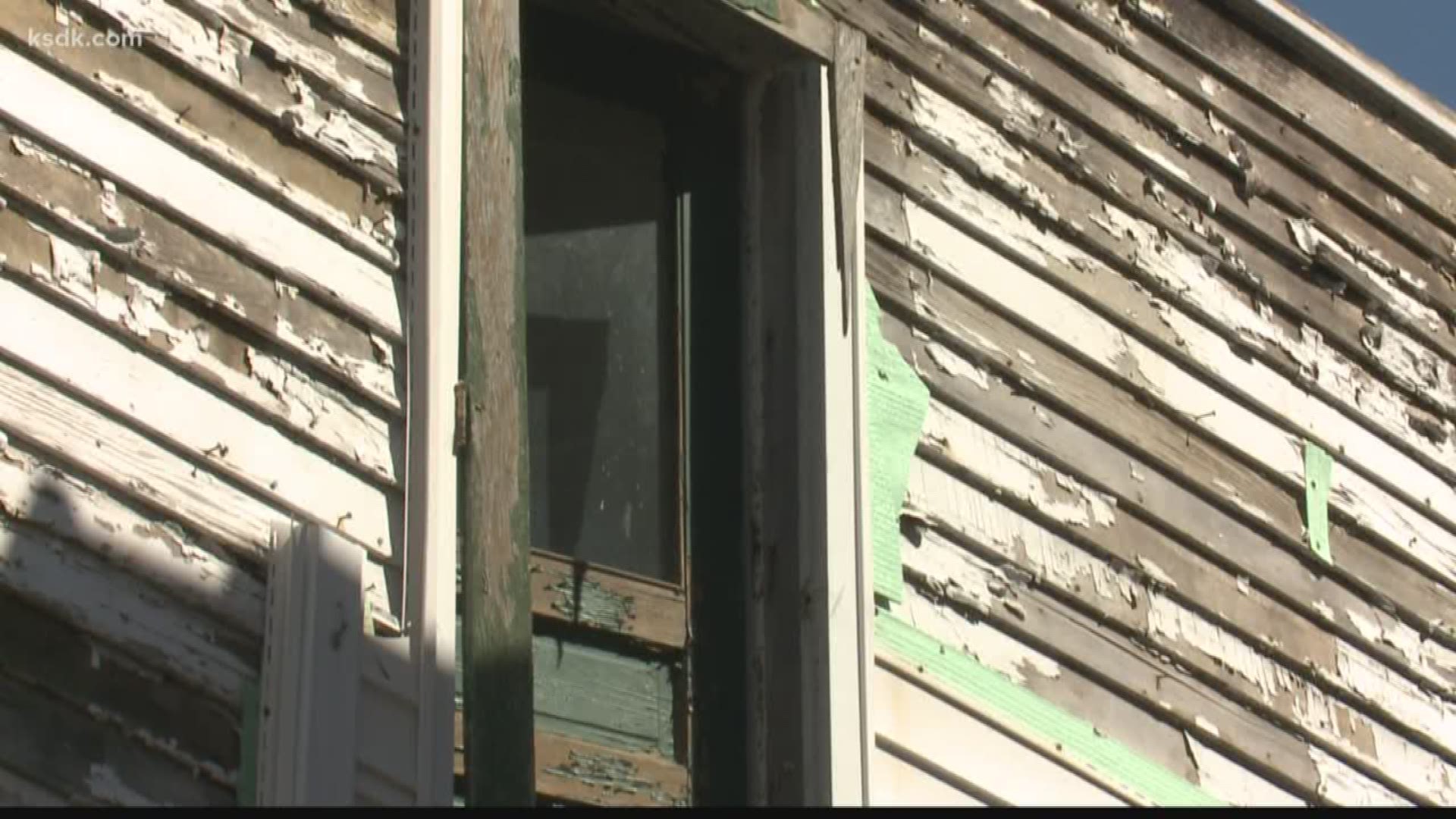 ST. LOUIS — Trash all over the yard, boarded up windows and a collapsing second floor.

Those horrid conditions probably don't sound like a neighbor that you would want to have.

But people in one south St. Louis neighborhood tell 5 On Your Side that is exactly what they've been living next to for more than a decade.

"It used to be a really nice neighborhood. Nobody bothered anybody," said Kim Padilla.

She and Joy Saettele once enjoyed sitting outside together and talking about the old days. They've lived next to each other in Carondelet for more than 20 years.

"You can't come back here. You can't enjoy your own neighborhood," Saettele said.

Padilla added, "You can't even sit out here in the summertime. It smells bad. I don't know what's up in that place."

The ladies have taken their picnic table conversations indoors over their fear of what's next door.

"You're really scared sometimes because you don't know who's over there or who's coming out of the hallway," Saettele said.

The property that's driving their concerns is located at 5204 Pennsylvania Ave.

Go there and you'll find all sorts of trash and debris scattered everywhere in the back yard.

Every window of the house and garage have been boarded up.

And the second floor looks like it could give way at any second.

"It keeps getting worse. It's falling in," Saettele said.

And these are just the problems she and Padilla say you can see in the light of day.

Padilla said, "We've had rats and bats. We've had drug addicts up in here at all times of the night."

So you can imagine their excitement when the abandoned and blighted property finally got a new owner after continually deteriorating for about 12 years.

Property records uncovered by the I-Team reveal it was sold in March 2018 by the Land Reutilization Authority of the City of St. Louis to a California woman.

5 On Your Side is not naming her because she has not responded to our repeated requests for comment.

But paperwork she submitted to the city as part of the sale show she bought the house "as is" for just $1,000.

Sound too good to be true?

Well, it's not entirely.

Every year, the LRA routinely sells hundreds of similar properties, both residential and commercial, for extremely cheap prices. Some are now going for just $1.

The big requirement, of course, is that the new owners are required as part of their agreement with the city to redevelop their property within 18 months.

In the case of the house on Pennsylvania, the woman in California has just a few months left to fulfill her agreement.

But 5 On Your Side made routine trips to the property to look for any signs of progress, and it's abundantly clear no redevelopment is happening.

Records from the city's building division also show no permits have been issued for the property in nearly two decades.

"It's been so long. I've never seen anyone over there," Padilla said. "She lives in California. I heard it's beautiful there. Why would she worry about this?"

In fact, Padilla and Saettele say the property's condition is only getting worse, even with the new owner.

The I-Team found five complaints to the city in the last 11 months alone for things like unsecured vacant building, building collapse and public nuisance.

In all, though, this one property has logged nearly 50 nuisance-related complaints made to the city dating back to 1998.

"I know it was cheap, but dang. If you're not going to do nothing with it, let it go and let someone knock it out," Saettele said.

So, the I-Team was curious to see just how often LRA homes are sold, but then neglected on the back end of the transaction.

However, the city was called to these same properties a combined more than 300 times for maintenance and safety-related complaints.

These include construction with no permit, dangerous animals, unsecured structures, debris and open storage.

Collectively, it's another indication that the required redevelopment of new owners isn't happening.

The remaining total either had surpassed their 18-month deadline or still had some time left to get the repair work done.

"How well or not well would you say the LRA is doing at fulfilling its mission?" the I-Team's Jacob Long asked Otis Williams.

Williams is the executive director of the St. Louis Development Corporation, the parent organization of the LRA.

Williams' response? "I think where we are at this point is we have a new birth."

He's referring to the current administration's emphasis on blight and vacancy, which has resulted in more funding for demolition and neighborhood stabilization.

Williams also points to some LRA success stories, including Walgreens and Fields Foods near Lafayette Square.

But the agency, which has been in existence since 1971 to take ownership of properties with long overdue unpaid taxes or ones that go unsold at a sheriff's safe, is not without its challenges.

"We check a few months before the 18 months is up and we send letters to these folks and remind them of the requirement to get an occupancy permit," he explained.

But if someone does no work and misses their 18-month deadline?

There really are no hard consequences from the LRA, other than the city has the option to take the property back. It's called the "right of re-entry" clause."

But even that process can be lengthy and expensive for the city, which only prolongs any redevelopment.

"It's not to our advantage to draw a line and make it very difficult. So we try to work with people," Williams said. "We don't have a pot of money to be able to go out and buy every one of those that reaches 18 months."

That means in situations like the one on Pennsylvania Ave., neighbors like Padilla and Saettele are left living and waiting next to a magnet for despair.

Asked if they think the California woman is going to come through on her end of the deal, Saettele said, "I don't believe this lady is going to do anything, but hopefully someone will see us and want to help."

Williams told the I-Team he would look into the matter to see what might be taking so long.

"We do have people who say they're going to do one thing and may or may no do it," he said.

But he insisted many owners come through when reminded of their obligations. "I'd say 80 to 85% are successful," he said.

So what's happening to make some LRA home projects unsuccessful?

Williams said many times buyers can't get financing for the redevelopment. Other times he said the home ends up not being appraised at what it's worth.

On the front end of the sale, they are required to show proof of ability to pay and their plans for redevelopment. He hopes through renewed community education efforts and developing more private-public partnerships, the LRA can make a dent in the problem properties that plague the city.

"I think the process is working, but unfortunately it takes time," he said.