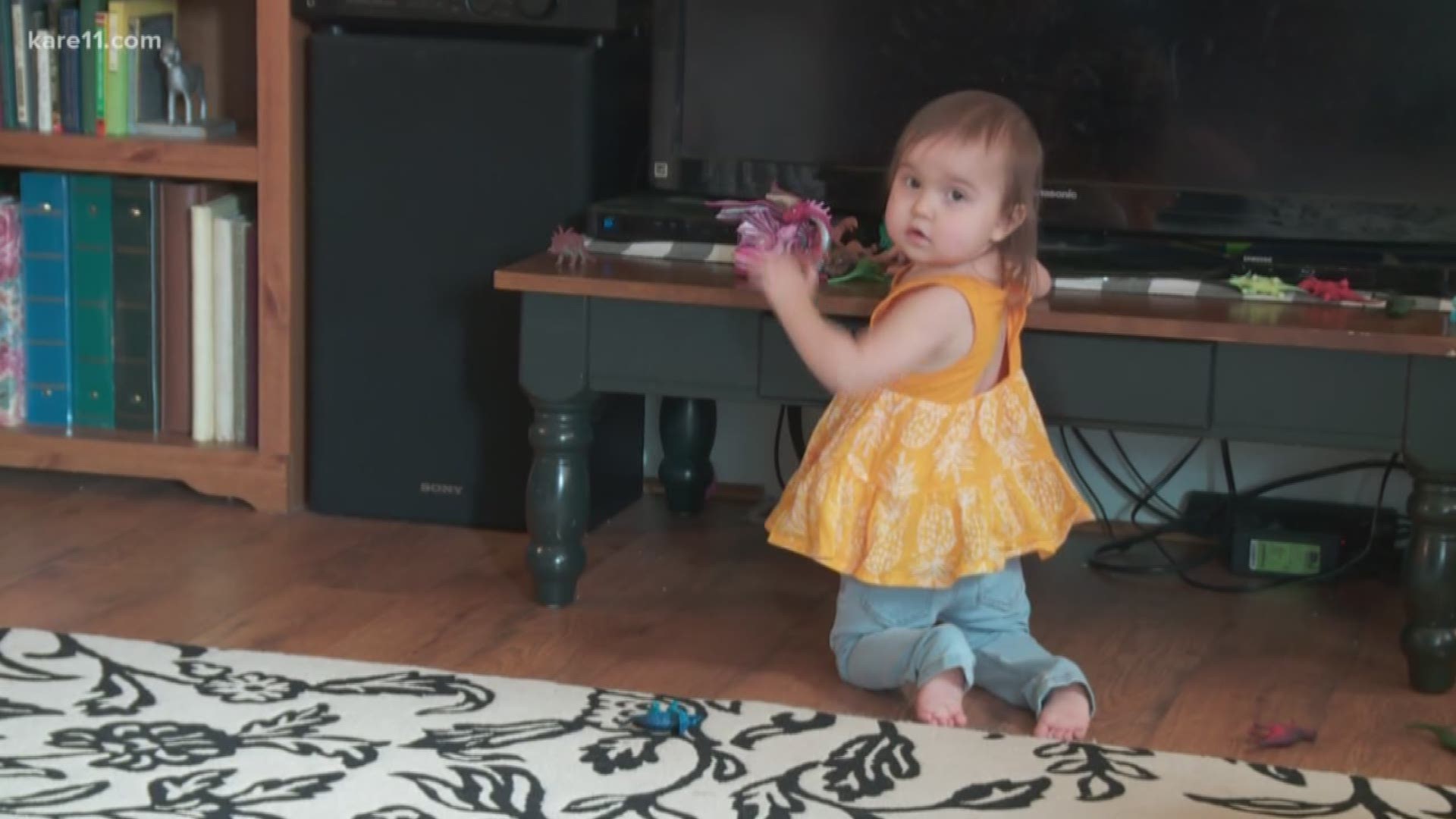 BLAINE, Minn. — A Minnesota toddler suffering from an often-fatal genetic disorder will receive the medication that could cure her.

In a sudden about-face, the Minnesota Department of Human Services now says it will cover the $2 million-dollar drug Zolgensma. The gene therapy drug was approved earlier this year and has grabbed headlines as the most expensive drug in the world.

Credit: KARE
Maddy Smith finally gets approval for a drug that could cure her.

Her mom Angie Bruce was desperate – and facing a deadline.

Zolgensma is only approved for use with children up to age two. Maddy will be turning two on September 6. So that would be the deadline for her to receive the treatment. Until now the state’s Medical Assistance program had been refusing to approve it.

Maddy’s disorder is known as SMA – Spinal Muscular Atrophy. It is usually fatal if untreated in infants. It prevents children from walking, breathing on their own or even holding their heads up. 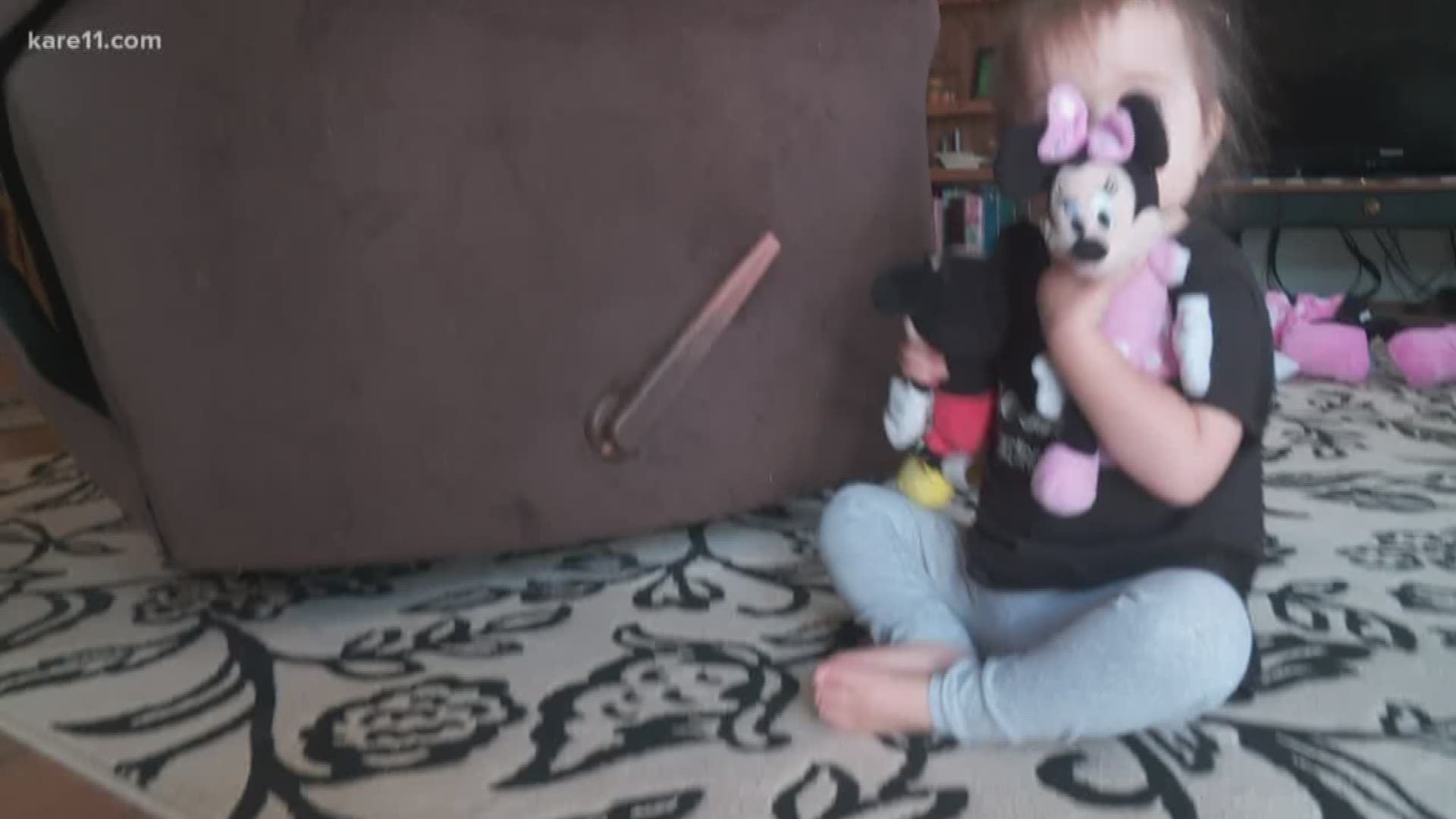 Maddy was diagnosed with SMA before she was even born. When she was just two days old, she started receiving a different treatment called Spinraza. That drug helped keep her symptoms at bay.

But Spinraza requires spinal injections three times per year for the rest of Maddy’s life. The toddler fights back, forcing doctors to sedate her every time. Angie says it’s hard on Maddy physically and mentally.

Although Spinraza has helped Maddy learn to scoot and to breathe normally, she still cannot walk, crawl, or eat solid food.

When the FDA approved Zolgensma this spring, Maddy’s family had new hope.

Her doctors said she was a good candidate. While Spinraza treats symptoms, Zolgensma would be a potential cure. The one-time therapy is designed to treat the root cause of SMA by delivering a fully functional copy of the gene that is missing or malfunctioning in Maddy’s body.

Even with its sky-high price tag, in the long run Zolgensma could be less expensive than years of injections of Spinraza.

Despite that, officials at Minnesota Department of Human Services initially refused to approve giving it to Maddy, pointing a controversy embroiling Zolgensma and its maker Novartis Pharmaceuticals. In addition to being known as the most expensive drug in the world, the FDA says scientists for the drug maker manipulated data. However, the FDA did not take it off the market.

“It was devastating. Just so devastating,” Maddy’s grandmother Sandy Davidson said of the state’s refusal to pay.

The family reached out to KARE 11, to their state senator and to the Governor’s office.

“I wanted the decision makers to look her in the eye and tell her they wouldn’t help her because she’s such a beautiful child,” said Davidson.

A day after KARE11 aired Maddy’s story, DHS agreed to schedule an emergency hearing. This week the agency reversed course and approved the treatment.

Maddy will be getting Zolgensma.

“I’m still in awe and still, you know, speechless,” Angie said. “DHS made the right decision.”

A life changing, potentially life saving decision, in just the nick of time.

Credit: KARE
Maddy will undergo the gene therapy treatment next week – just before her 2nd birthday.

RELATED: Brand-name drug prices still rising, just slower and not as much