"Don't do what I did. Don't underestimate them. I was like, 'Well my dog should be able to handle herself.' And that's absolutely not the case." 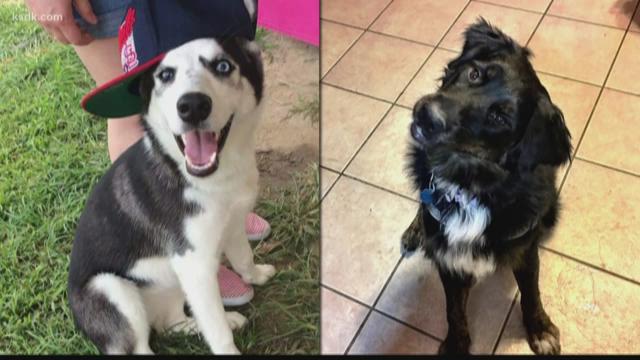 GRANITE CITY, Ill. -- Coyotes are getting bolder in the Metro East.

Their latest victim, two dogs, were literally shred to pieces in their own backyard.

These were not small dogs. A Granite City family lost their Husky and Australian Shepherd in the most horrific way possible.

You might think the safest place for your dog is in a fenced in yard.

"I let the dogs out, I was just cleaning up a mess they'd made," said pet owner Erika Hartwick.

"I heard our dog fighting. Just awful noises. We ran back here and they were gone," said Hartwick.

The Hartwick's dogs Lelu and Murphy were only in their yard for a few minutes unsupervised.

Long enough, the Hartwick's said, for them to become prey to a group of coyotes.

"I saw Murphy first, he looked like he had been drug. There had been a blood trail. He had blood pouring out of his ears,” said Hartwick. “We found Lelu in the ditch and she was just ripped in two.They were medium sized dogs.”

Murphy was put down later that night. Hartwick said the brutal attack, being so close to home, has been devastating to her young children.

"[The baby] will go ruff ruff. She'll howl and she still looks for them," said Hartwick.

"The more we build, the more the wildlife habitat is gone. We're in their space so they're going to be coming into our space," said Cummins- Brown.

And she warns fences can't protect your pets.

"[You can't protect] any animal actually. Even people. Though it's rare for them to attack a human, the problem is, if they are hunting in a pack, a pack can overtake a much larger animal. Coyotes can climb fences. So fences aren't enough and they can dig underneath," said Cummins-Brown.

The Hartwick's are now trying to spread a warning to others in the area.

"Don't do what I did. Don't underestimate them. I was like, 'well my dog should be able to handle herself.' And that's absolutely not the case," said Hartwick.

According to the veterinarian we talked to, coyotes hunt from dusk till dawn. So that might explain why they seem to be even more active than usual. The vet also recommends putting your dog on a leash close to your house. And of course, supervise them when they're out as much as possible.

The department of natural resources said you can hunt as many coyotes as you want until Feb. 15. That's the end of hunting season.

Putting up lights in the dark corners of your yard and making noise when you're out with your dogs at night can also help keep coyotes away.

They'll be less likely to approach. If you come face to face with one you're advised not to run but back away slowly and calmly.