Charles Lefarth says Apple Maps is listing his address as a way to get into a new subdivision behind his home. The only problem is his home is on a high hill, separated from the subdivision by thick woods, a pond, and no roads. 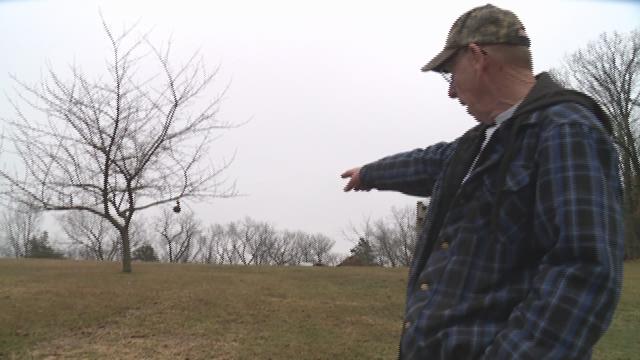 IMPERIAL, Mo. – A Jefferson County man said he's being terrorized by a flaw in the Apple Maps system.

Why? He said the app is sending strange cars to his property day and night.

Charles Lefarth says Apple Maps is listing his address as a way to get into a new subdivision behind his home. The only problem is his home is on a high hill, separated from the subdivision by thick woods, a pond, and no roads.

"They've pulled up about 12 feet, all the way into the yard," Lefarth said pointing to tire tracks on his front yard.

It's a mix up that routinely results in damage to his property, and has even brought state troopers to his door.

"They're constantly looking for homes that are up over the hill that were put in the subdivision. Half of them pull up into the yard, destroy it. I have to redo it," said Lefarth.

The final portion of the Amberleigh Woods subdivision behind Lefarth's home was finished just last year and that's when he said Apple Maps began rerouting people to park at his home and walk to through his property to their destination.

"One night I had four cars come up here in about one hour. But what concerned me is when i had a state trooper here looking for a place," said Lefarth.

One of those unwanted visitors may have been a relative of Dawn Walter, who just moved into the subdivision. Plugging in her address takes you to Lefarth's doorstep.

"Everyone who had an apple phone ended up on a gravel road about seven, eight miles from here and told them to get out and walk," said Walter.

The local fire chief assures Lefarth they don't use Apple Maps, but he still worries.

"I don't want an ambulance coming here, for an emergency over there because it's going to delay them five minutes," said Lefarth.

We reached out to Apple to get a comment and some resolution to this error, but haven't heard back yet.

There is a quick way to let Apple know that the location you're trying to get to is not right in their system. Simply go to that location in the app and click report a problem at the bottom of the screen. Then you can update them with what exactly is wrong with that GPS address.