Rich Garner, an Osage Hill resident, believes close to 100 kids will be playing in the area during the Thanksgiving weekend. And that makes him worry about Big Bend Bridge. 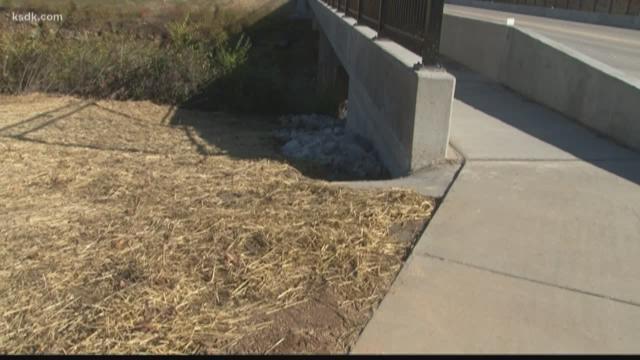 KIRKWOOD, Mo. – People who live in the Osage Hill neighborhood are worried about the Big Bend Bridge over I-270 that was supposed to have been fully repaired. And when the Missouri government was slow to move, those neighbors called the 5 On Your Side I-Team.

“We are going to have them off for four or five days,” said Rich Garner, an Osage Hill resident, about kids in the neighborhood.

Garner believes close to 100 kids will be playing in the area during the Thanksgiving weekend. And that makes him worry about Big Bend Bridge.

“We have a lot of kids that ride their bicycles, It's just too many possibilities for a catastrophe to happen,” said Garner.

On each of the four corners of the bridge are entryways for pedestrians where the sidewalk changes alignment.

“It's possible for child to go down that hill,” said Garner.

That is because there are no guard rails.

“If a child were riding his bike and lost balance they could very easily go right down the hill and potentially on the highway,” said Rita Chrivia, another resident.

Krivia wrote MoDOT last week about the problem. Though she says the agency told her safety measures would be installed there, they didn't say when.

“It does seem as though there were issues that they thought were taken care of like the striping that was not,” said Krivia.

MoDOT opened the bridge in August after it making extensive repairs elsewhere.

“Safety features I think should be paramount,” Krivia said.

And all repairs were supposed to be "complete" when the bridge opened last August. But that was months ago and the neighbors are losing their patience.

“Anytime safety is involved, yesterday is the latest that should've been done,” said Garner.

After we contacted MoDOT to let them know we would be airing this report, the agency's spokespeople told us that fencing or rails will be installed this Wednesday just in time for the holidays.