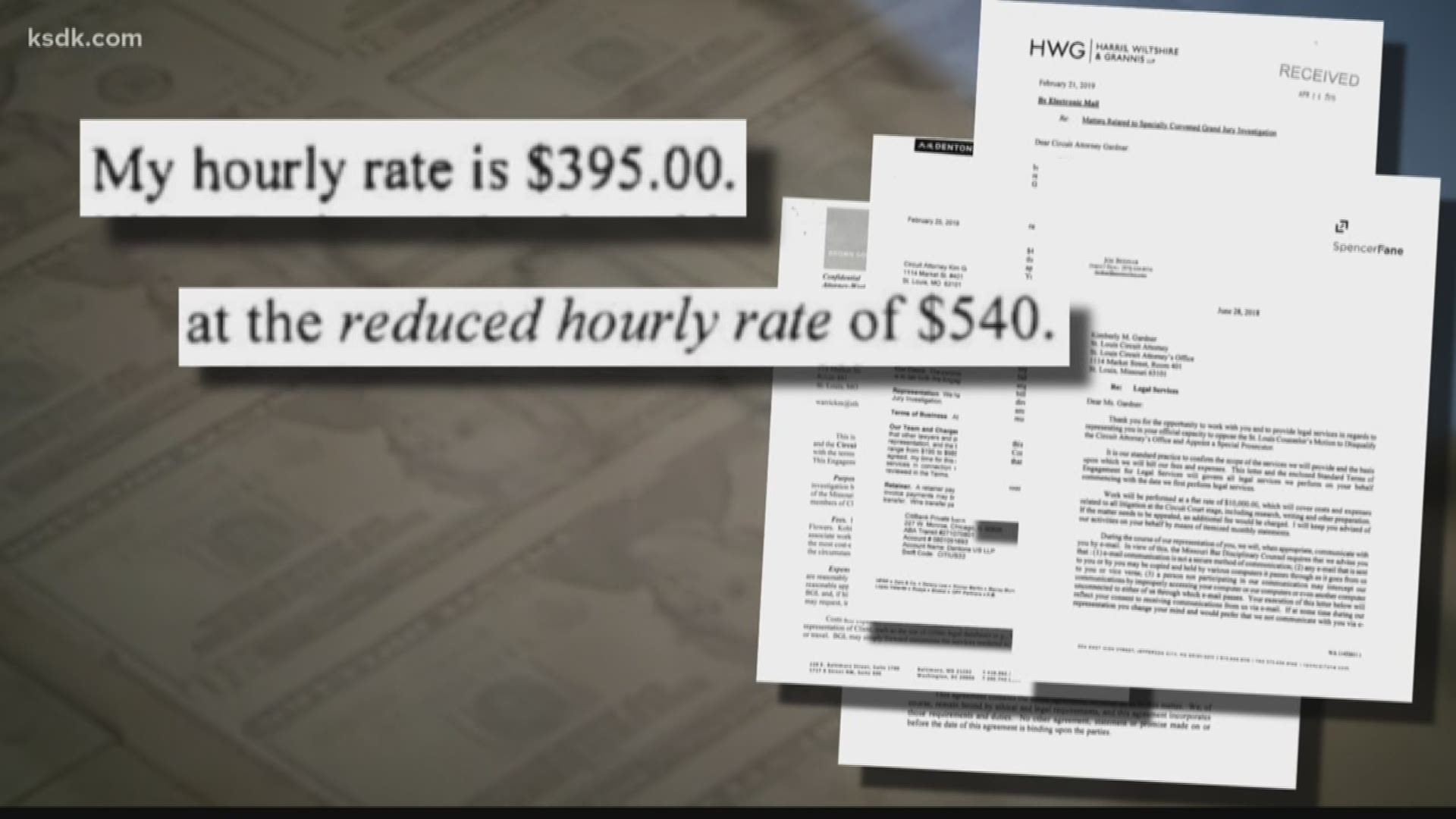 For the past several months, the I-TEAM has been reporting on an ongoing legal battle between St. Louis Circuit Attorney Kim Gardner and Gerard Carmody, a special prosecutor appointed to investigate one of her former employees.

Carmody is looking into whether William Don Tisaby, a former FBI agent, lied under oath during a recorded deposition. Gardner hired Tisaby in 2018 as her office investigated former Missouri Governor Eric Greitens for invasion of privacy.

All charges against Greitens were eventually dropped, but afterward his attorneys went to St. Louis Police claiming Tisaby had intentionally been untruthful.

Circuit Judge Michael Mullen later appointed Carmody to conduct the perjury probe, over objections from Gardner that a special prosecutor was even necessary.

City Counselor Julian Bush is who sought the appointment of a special prosecutor after successfully arguing that Gardner would be conflicted if it was found Tisaby had committed a crime.

That move also happened over the objections from Gardner, who argued a special prosecutor was premature and that Bush had represented the circuit attorney's office previously in other matters.

Specific details of the arrangement between the court and Carmody, including the scope of his investigation and authority and how much he and his team will be paid, have not been made public. There is a gag order over some of the information in the case.

But 5 On Your Side has learned through a public records request that Carmody's work could total a quarter of a million dollars, if not more, and could fall on the backs of St. Louis taxpayers.

Documents show the city recently allowed $250,000 to be transferred from the courts budget to Bush's office in preparation of bill and expenses from Carmody's firm. Bush declined to comment for this story.

The total cost, though, won't be known until after the perjury investigation concludes. Carmody's appointment is approaching the one year mark and a grand jury has been impaneled as part of his investigation for about six months.

But city taxpayers could also end up paying tens of thousands of dollars for five outside law firms that have been retained by Gardner to defend herself and her office over the last year. So far, they've unsuccessfully challenged portions of Carmody's investigations all the way to the Missouri Supreme Court as other matters seeking to disqualify him remain pending.

An April 30, 2019 letter from Gardner to Mayor Lyda Krewson, Board of Aldermen President Lewis Reed and Comptroller Darlene Green that was obtained by 5 On Your Side says she needs the continued outside representation because of Bush's refusal to represent her.

"Mr. Bush is duty bound to serve as the legal adviser to both the Circuit Attorney's Office and the Police Department. Mr. Bush made a legal decision to advocate for the demands of one client over another client. Mr. Bush's actions created a legal and professional conflict of interest for the City Counselor. In his official capacity as City Counselor, Mr. Bush should have disqualified himself from taking any action, in his attempt to remain neutral to two clients," Gardner wrote.

The statement was part of her request to Mayor Lyda Krewson, Board of Aldermen President Lewis Reed and Comptroller Darlene Green for emergency funding to cover legal expenses related to Carmody's investigation.

Under the agreement with Shaffer Lombardo Shurin, which is dated April 26, the firm agrees to defend Gardner in her "official or personal capacity" in court and elsewhere "regarding the Special Convened Grand Jury Investigation."

The firm's attorney, Dawn Parsons, is charging $395 per hour and $150 per hour for her legal assistant to help on the case. But that doesn't include other expenses that could be incurred and billed to Gardner at a later date, including out-of-town travel.

Under the agreement with Brown Goldstein Levy, which is dated March 18, the firm agrees to serve as counsel for the circuit attorney's office in an "investigation being conducted by the Special Prosecutor, appointed by Judge Michael K. Mullen of the Missouri Circuit Court."

The firm's attorney, Kobie Flowers, is charging the office a "reduced hourly rate" of $450 and an hourly rate of $425 for any associate working on the case.

But again, that doesn't include other legal expenses that could be incurred later on for which the office has agreed to pay. In fact, this contract specifically notes that "it is not possible to know how long this representation will last, what the outcome will be, or the total cost of legal fees or expenses."

It was signed by Gardner's chief of staff, Michael Warrick. All of the other contracts bare the name and signature of the circuit attorney herself.

Under the contract with Dentons US LLP, which is dated Feb. 25, the firm agrees to provide "legal services in connection with the Special Convened Grand Jury Investigation."

The firm's attorney, Lisa Krigsten, writes that she is charging $540 per hour for her work on the case. That does not include the $15,000 retainer Dentons requested in this matter and other related costs that could be incurred at a later date.

Under the deal with Harris, Wiltshire & Grannis LLP, which is dated Feb. 21, the firm agrees to represent Gardner in her "official or personal capacity" as it relates to the "Special Convened Grand Jury Investigation."

Attorney Roy L. Austin, Jr. writes that he "will perform the bulk of the work on this matter", but that other colleagues may jump in as needed. For those legal services, the firm is charging a "blended rate" of $540 per hour plus $150 per hour for legal analysts.

Outside, third-party expenses, such as travel or application filing fees, are set to be billed separately under this contract, like the others.

Under the arrangement with SpencerFane, which is dated June 28, 2018, the firm agrees to "provide legal services" to Gardner in her "official capacity" to oppose the "St. Louis Counselor's Motion to Disqualify the Circuit Attorney's Office and Appoint a Special Prosecutor."

Attorney Joe Bednar writes that their work will be performed at a flat rate of $10,000, which he said will cover costs and expenses related to all litigation at the Circuit Court stage, including research, writing and other preparation. He writes that appealing the matter will cost extra.

It won't be known how much Gardner's office gets billed until the investigation is complete, but city records indicate she's also anticipating a big bill.

The city's already allowed for Gardner to transfer $80,000 from her salaries budget and use it to cover expenses related to "professional services" and "legal services."

But for the upcoming budget year, Gardner is seeking $370,600 for "contractual and other services." The city's budget is currently going through hearings before making it to the Board of Aldermen for consideration and approval.

Through another public records request, 5 On Your Side has been able to confirm from Comptroller Darlene Green that since at least January 2019 only one payment has been made by the city to any of these firms.

It was for $1,404.00 (2.60 hours of work) to Brown Goldstein Levy on March 15 for a teleconference with Austin and Krigsten regarding the special prosecutor's March 2019 search warrant for six months of electronic communication from within the circuit attorney's office that Gardner has been fighting.

Meantime, the validity of Gardner's contracts and whether the city can use taxpayer resources to pay on them remains in question.

Bush and the circuit attorney's office seem to agree that Gardner certainly has the authority to enter into such contracts related to her official duties, including contracts with lawyers.

The city has also argued in court recently that it cannot pay on the contracts because they "haven't seen them."

Now, there's a new temporary, 15-day restraining order against the city, issued by Judge Joan Moriarty, that bans the use of any taxpayer resources from being used to pay any of the five firms.

In her order, Moriarty writes that the city has agreed it would be "unlawful" for the city to pay invoices without first having seen the contracts.

The city also argues, according to Moriarty's order, that "Gardner does not have the sole discretion to enter into contracts for any amount."

In Moriarty's order, Gardner and her team argue that she has the "discretion to employ outside counsel and hire individuals with her budget."

The order goes on to state that Gardner has line items in her budget for special assistant circuit attorneys and professional and legal services.