'He's a 16-year-old kid, he's my kid' | Mom of Cardinal Ritter player at center of scandal tells her side of story

Allen said this is taking an emotional toll on her 16-year-old son, who she said has taken the blame upon himself.

ST. LOUIS — On Aug. 31, Cher Allen said both of her sons had football games. While she attended her younger son's game, her other son, Cardinal Ritter junior running back Bill Jackson, was playing in his school's season opener against a school in Illinois.

Jackson was supposed to sit the game out as punishment for being ejected from the state championship game last year. However, he took the field wearing a jersey with someone else's number, with a different name listed on the roster.

Allen said she didn't know her son had played in the game until he told her after it was over. She said it was a few weeks after that when she realized his jersey and number were switched, after seeing a photo from the game published in a local Illinois newspaper.

She said she went to speak with the coach.

"We just talked about him actually playing in the game," Allen said. "I felt that the decisions was made, for whatever the reason is. I didn't scrutinize the coach. I didn't ask a bunch of questions. Looking back, I wish maybe I would have. But, I didn't."

Nearly a month and a half after Jackson played that game, an internal investigation into the incident led to the Archdiocese of St. Louis slapping a punishment on Cardinal Ritter than Allen said is "excessive" and "overkill".

"Is this the correct punishment?" Allen asked, "Is this punishment given to every school in every neighborhood."

The entire coaching staff, including head coach Brandon Gregory, was fired. The team's season was forfeited and suspended for the rest of the year. Bill Jackson was slapped with an eight-game suspension going into his senior season.

Allen said this is taking an emotional toll on her 16-year-old son, who she said has taken the blame upon himself.

When asked who she believes his responsible for the decision to play her son, Allen said "adults", though she said she was never given a reason for why that choice was made.

Allen said her main issues with the situation are the severity of the punishment and the timing of the investigation. She said she questions how long it took for an investigation to be launched into her son's participation in the team's season opener.

"I believe this information was strategically put out to cause harm," Allen said.

Bill Jackson, according to his mother, has dreams of playing college football. She said, if his punishment remains what it is, she is concerned about his ability to get recruited to play.

"An eight-game suspension would definitely impact his ability to go to the next level which is college football," Allen said. "Which is why I must advocate for him. I must speak on my concerns because this is his future."

Despite the difficulties ahead, Allen said she does not plan to take her son out of Cardinal Ritter. She said school is a family and that teachers, faculty, parents and students have embraced and uplifted her and her son. 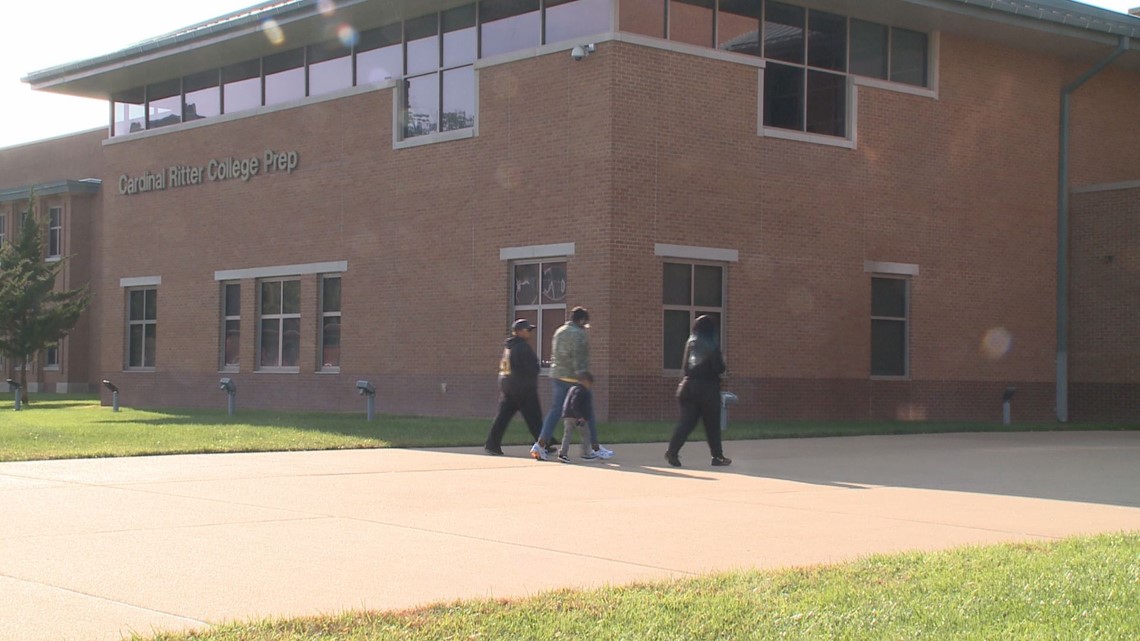 'School's never going to be the same': Cardinal Ritter community meets to talk next steps
ST. LOUIS - Cardinal Ritter students, parents and alum attended a meeting at the school on Sunday afternoon. The media was not permitted to enter the meeting, but multiple parents told 5 On Your Side the purpose of the event was to provide more clarity for families, discuss next steps and create more morale for students.

She says she is hoping something will change. If not, she said she hopes this won't damage her son's future.

"This is not about 2019," Allen said. "This is about 2021, when he goes away to school. Then he has to look back on 2019 and say 'It's still following me'. Something is going to happen, whether the eight games get reversed or not. I would hope the college coaches would see this as a learning experience and take a chance on my son. His talent is there. He would be a great addition to any college team."

Allen also said she does not place blame on the coaches. She said she will continue the relationship she has with them, and that she wants them to continue to have a positive impact on her son and his future athletic growth.

RELATED: South city bar owner fighting for his life after being hit and dragged down street by car thief