Last year more than 2-million people passed through the fair's gates. for one woman across the street, it’s the perfect place to save a life. 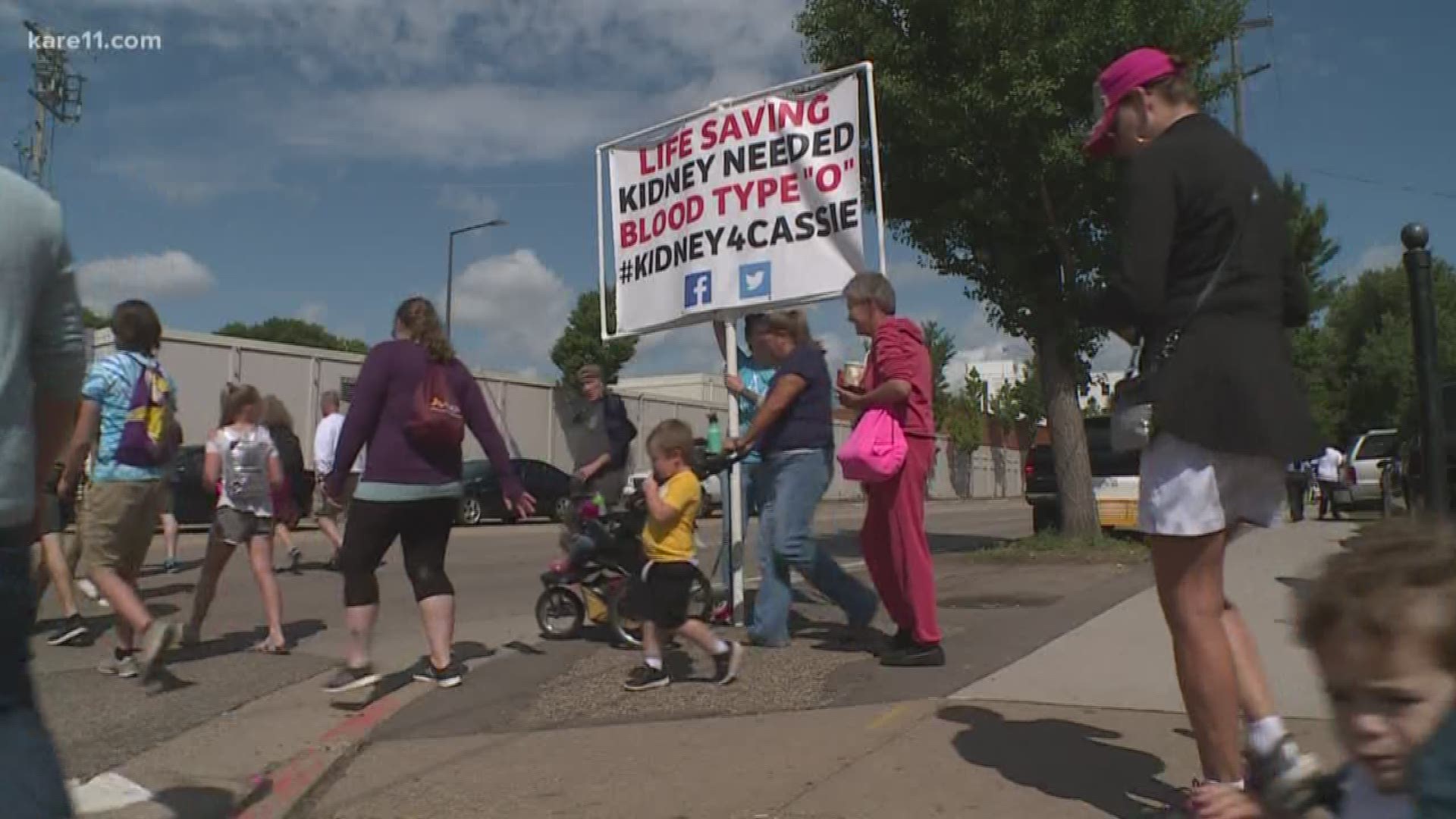 ST PAUL, Minn. — When you enter the gates of the Minnesota State Fair, they greet you with a smile the way only Minnesotans can, nicely.

Last year more than 2-million people passed through those gates.

And for one woman across the street, it’s the perfect place to save a life.

“This is for my cousin Cassie Amsler,” Jamie Bernhardt says. “She’s looking for a kidney donor.”

Holding a large sign made of canvas and PVC piping, Jamie stands at the corner of Snelling Avenue and Midway Parkway, greeting fairgoers and sharing her message.

“It’s the place to be. It’s where everybody goes,” Bernhardt says.

The sign is big and hard to miss and Bernhardt is hoping someone will see it and decide to take a chance.

“I’m just hoping someone can use this as their State Fair story someday. I want them to be able to say yeah, I went to the fair and I ended up saving a life,” Bernhardt says.

Holding up a sign outside the fair may seem like a desperate move, and that’s because it is.

“She’s going to die otherwise,” Bernhardt says. “A person can’t live on dialysis for the rest of their life.”

Finding the right donor to give someone a kidney is difficult under normal circumstances.

“Because of the anti-bodies it’s really difficult to find her the perfect match,” Bernhardt explains.

We all have anti-bodies in our systems, but Bernhardt says her cousin Cassie’s anti-bodies are even stronger because of the kidney she already received 17 years ago.

“When she was 18, she had both kidneys fail and her cousin Troy stepped in and gave her one of his,” Bernhardt says.

“She’s been on dialysis for about three years now,” Bernhardt says.

And with the donor list 5 to 10 years out, Bernhardt knew something had to be done.

"Family is everything. To see her struggle and still, still keep a brave face, it's so inspirational. I wanted to do something to help her," Bernhardt says.

With the odds stacked against her, Bernhardt decided to even the score.

She went out and bought the biggest sign she could find, and she started showing it outside the busiest place in the state.

“There’s so many people here every day,” Bernhardt says.

Getting a sign this big to the fair each day isn't easy, the wind is a constant battle.

Getting off work is also a challenge.

But in just six more days the crowds will be gone, and it'll be another year before they're back.

So, until those gates close the final day, Bernhardt will stay right here across the street, hoping a place that’s all about bringing people together, will help her do just that.

"It just takes one person, just get the word out there and that's all I'm really hoping to do."

And we want to help Jamie get the message out there.

If you know someone with Type-O blood who might be a match, show them our story.

Use the hashtag #Kidney4Cassie and get the word out on social media.

You can also check out their Twitter page here.

RELATED: What's happening in the KARE 11 Barn at the MN State Fair?

RELATED: Generations of families at the Minnesota State Fair