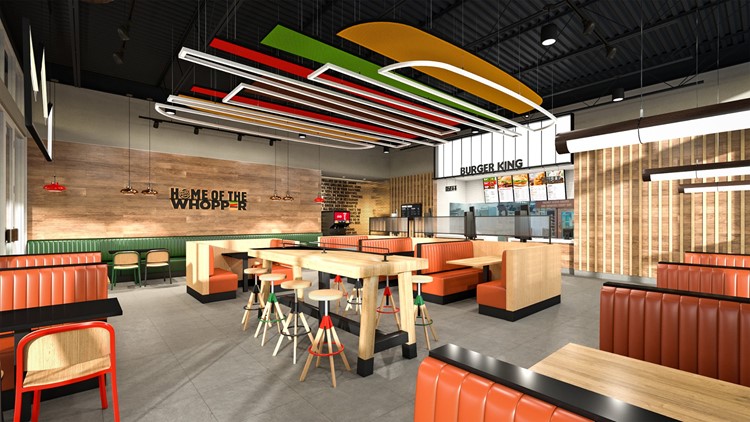 Why this St. Louis franchisee was selected to test a Burger King redesign

MARYLAND HEIGHTS, Mo. — Broadway Restaurant Group, a Maryland Heights-based Burger King franchisee that owns more than 55 restaurants across Missouri and southern Illinois, has opened a new Burger King in Jefferson City that will serve as just the second location in the world to debut and test the brand's new restaurant design.

The new Jefferson City location, located at 521 Missouri Blvd., is now open and has created 30 to 40 new jobs for the area.

"The booths are designed after a Cadillac bench seat that harkens our guests back to a time where people and the road were one — nothing but time and enjoyment of being on the road and stopping for a quick bite to eat," Chris Mott, head of architecture, design and constructions for North America at Burger King, said in a statement.

READ ALSO: New deli on The Hill closes after dispute with Amighetti's

The Maryland Heights company is one of few franchise groups in the U.S. that works with Burger King's corporate office to test new concepts, including the meatless Impossible Whopper, which was tested in St. Louis last spring, officials said.

Michael Adams, vice president of operations, spoke with the Business Journal last summer and said Broadway Restaurant Group has continued to be selected to test new concepts because of the number of restaurants it owns and because its restaurants aren't all located in one spot.

"We have restaurants all over Missouri and Illinois," he said. "That gives them a good feel for the feedback we get."

The Impossible Whopper test in St. Louis was successful and the burger was rolled out nationwide soon after. Adams said the test allowed the group to bring in new guests to its restaurants in order to try the burger, but they also ended up ordering other products, which boosted sales. He declined to share how much growth in sales the franchise group saw.

Jonathan Maze, executive editor of Restaurant Business Magazine, would likely agree with Adams' assessment about why Broadway Restaurant Group continues to be selected as a test market.

"If you test in the Midwest, you may get a better read on the country as a whole," Maze said. "You don't want to try it in an ultra urban or super rural area. It depends on what you're trying to accomplish."

Check out the full story from the St. Louis Business Journal here.