Business owners say St. Louis County ordered them to shut down without investigation

One business was already closed; another was running curbside pickup 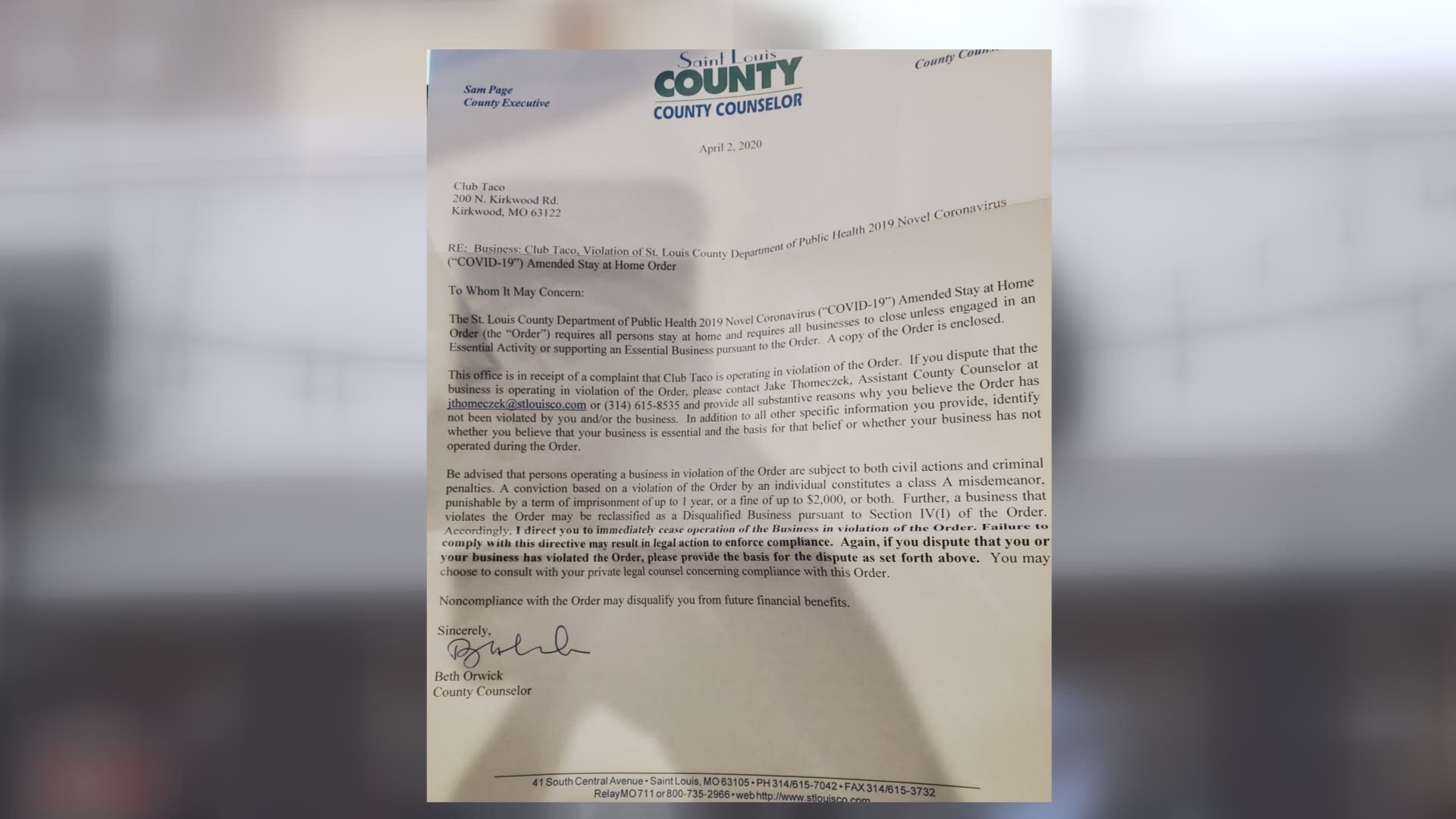 ST. LOUIS COUNTY, Mo. — Business owners who spent the weekend stressing about shut down letters they got from the St. Louis County Counselor’s Office last week have told 5 On Your Side that county government did no investigation before threatening them with penalties including prison time, fines and exclusion from financial help for businesses suffering losses because of the coronavirus outbreak.

5 On Your Side obtained a list of 42 businesses that the County Counselor’s Office sent letters to, stating that they had received “complaints” that the businesses were violating the county’s stay-at-home order and that they should close their operation.

Some businesses said that they haven’t even been open during the time the county believes they violated the order.

Others said they are operating within the guidelines for essential businesses.

One said they had not received a letter from the county.

And all of the businesses who contacted 5 On Your Side said the county didn’t do any investigation of its own into their practices before sending the threatening letters, including Kirkwood’s Club Taco owned by Gerard LaRuffa a.k.a. Taco Boss.

“What's the validity behind it?” he asked. “Because obviously they're taking the word of whoever said it, whoever submitted a complaint, they're not taking the word of the businesses, we’re just the bad guys and we're not given the opportunity to defend ourselves.”

County Executive Sam Page announced the county would be cracking down on businesses that were violating the county’s order during a press conference Thursday. The county opened an online complaint process at www.stlcorona.com where forms could be sent to county officials.

That day, County Counselor Beth Orwick, sent letters the businesses stating, in part, that the county had received “a complaint” that their business was in violation of the order and failure to comply could result in up to a year in jail, a $2,000 fine and “may disqualify you from future financial benefits.” 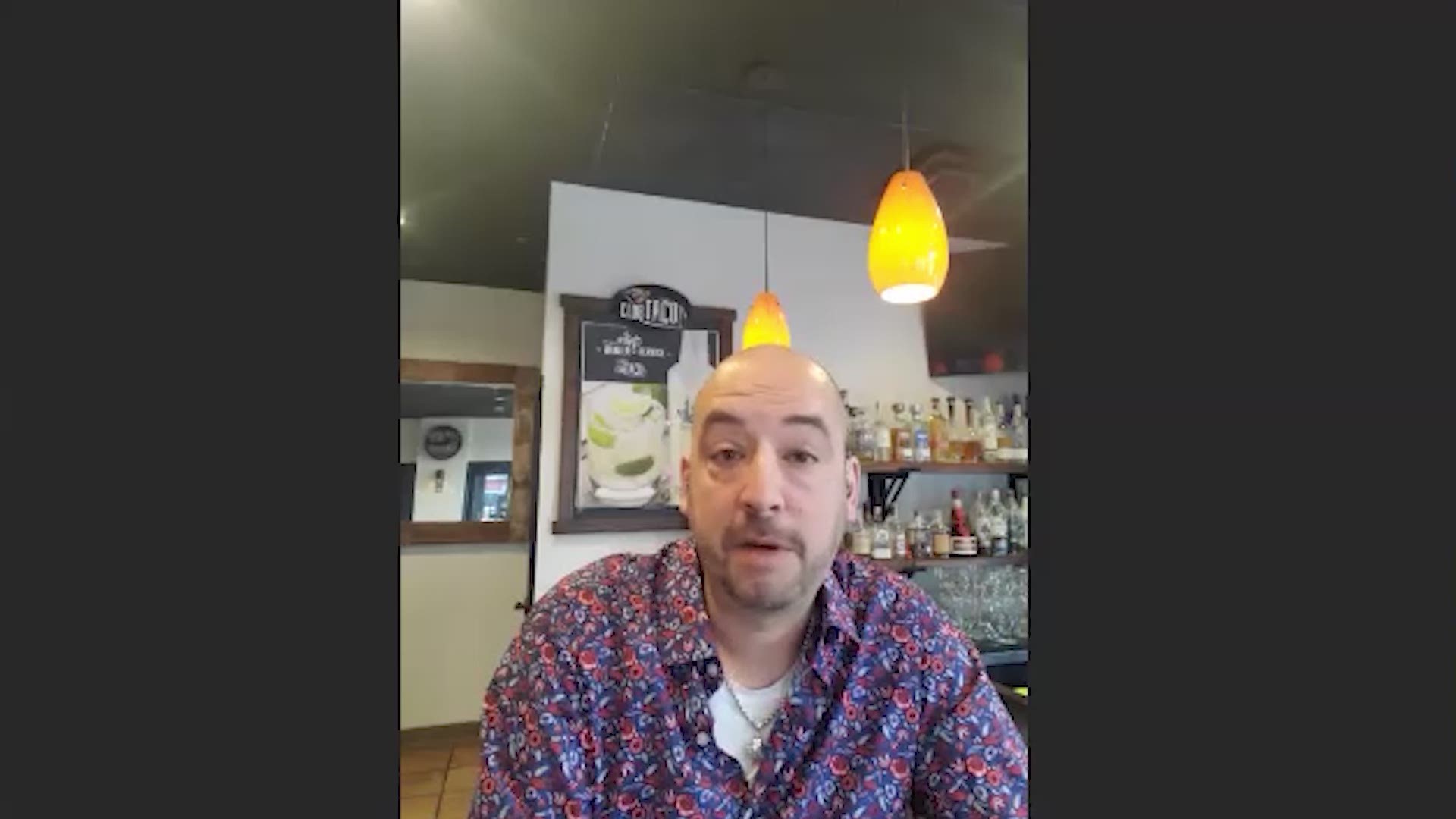 LaRuffa said he didn’t know he received one of the letters until a Business Journal reporter contacted him and he checked his mail Friday afternoon.

“I am more mentally exhausted, than I am physically exhausted because of everything we are all dealing with and the government is no different than me,” he said. “The only difference is, they have the ability to impact me on the negative and if there are people out there that are truly violating that, that are non-essential businesses, then I get that.

“But I fall under the category of an essential business that is allowed to operate … And, I am doing it very well. So for them to say cease my operation because they got a tip? Then you should at least have the courage to call me and say this is what we got. This is what we heard from one of our citizens and, in that situation, I feel as though they're doing a disservice to the business community that everyone is trying to support.”

LaRuffa said he called Assistant County Counselor Jake Thomeczek Monday, who told him he would be removed from the list.

But County Executive Sam Page’s spokesman Doug Moore said no businesses would be removed from the list.

“The status of the investigation into each business, however, will be added to the list,” he wrote. “Our county counselor’s office is talking with each business on the list to determine whether they are in compliance. If so, great and ‘in compliance’ or similar notation will be placed next to the business name.

“If, through investigation, the business is deemed to be operating in violation, then a ‘further action needed’ notation could land by their name, meaning legal action. But I want to stress legal action is a last resort. We’d rather non-essential businesses do the right thing, close their doors and help save lives.”

He said the county counselor’s letters asked businesses to contact the county to “open a dialogue and let us know they are not operating.”

Moore the county counselor’s office fielded calls from about a dozen business owners Monday, but he did not say which businesses are now considered to be in compliance.

“Some businesses have already done that," Moore said. "We strongly encourage others to do the same. For example, one business explained that they share a door with another business that is an essential business – which could cause confusion.”

Other local governments are grappling with how best to enforce stay-at-home orders for businesses, churches and other establishments, including the City of St. Louis.

So far, the city has sent about two dozen letters to various businesses, including two churches, worded much like the county's letter. Mayor Lyda Krewson's spokesman Jacob Long said the city conducts "some" investigation before sending them, including accounts from multiple eyewitnesses or people with firsthand knowledge of the situation as well as any video or photographic evidence.

Credit: KSDK
NOTE: Some of the businesses are now operating in compliance with the order

He cited a recent example of a Chipotle having too many customers inside its establishment. In that case, the city got video of the violation and sent a letter.

"We're not trying to shut these businesses down," Long said. "We just want compliance."

De Littlefield and her mother, Wanda Durns, 71, said the county should have done more to vet the complaints instead of putting the onus on businesses like theirs to prove themselves innocent.

"It's another headache that small business owners do not need right now," she said. "And it's unfair."

Their restaurant, Meyer’s Country Cottage & Pub in Black Jack, closed March 18. Durns said she didn’t know the county had sent her a letter until friends and family told her the business was being reported by the media as among those the county believed was violating the order.

She went to the restaurant to check the mail after nearly two weeks away and found the letter. Thoughts of worry for her liquor license and missing out on ways to help pay her staff with grants raced through her mind.

“Obviously they never sent anybody out there to even check because all of our doors are locked and there’s nobody in the parking lot,” said Burns, who said the business has been around for about 50 years. ”If you’re going to be taking these tips from people you better check into it.”

She, too, called the county counselor’s office Monday, and said she was told she had been taken off the list.

“It's actually baffling to me,” her daughter said. "What is so concerning is if people are wanting to be just petty and calling the hotline and saying, ‘Oh, I see so and so's opening.'

"I just, I don't know what kind of verification process, they have in place before they're putting these names on these lists. I don't understand how they could in good conscience do this in the first place, but then to just completely dismiss it in the matter of a two-minute phone conversation and say, ‘OK, we'll take you off. No problem,’ It just, it's absolutely ridiculous. Absolutely ridiculous.”

On Tuesday, Durns said she got an email from the county counselor's office confirming her business is closed.

LaRuffa got a similar message confirming his business is operating only with curbside pick-up. 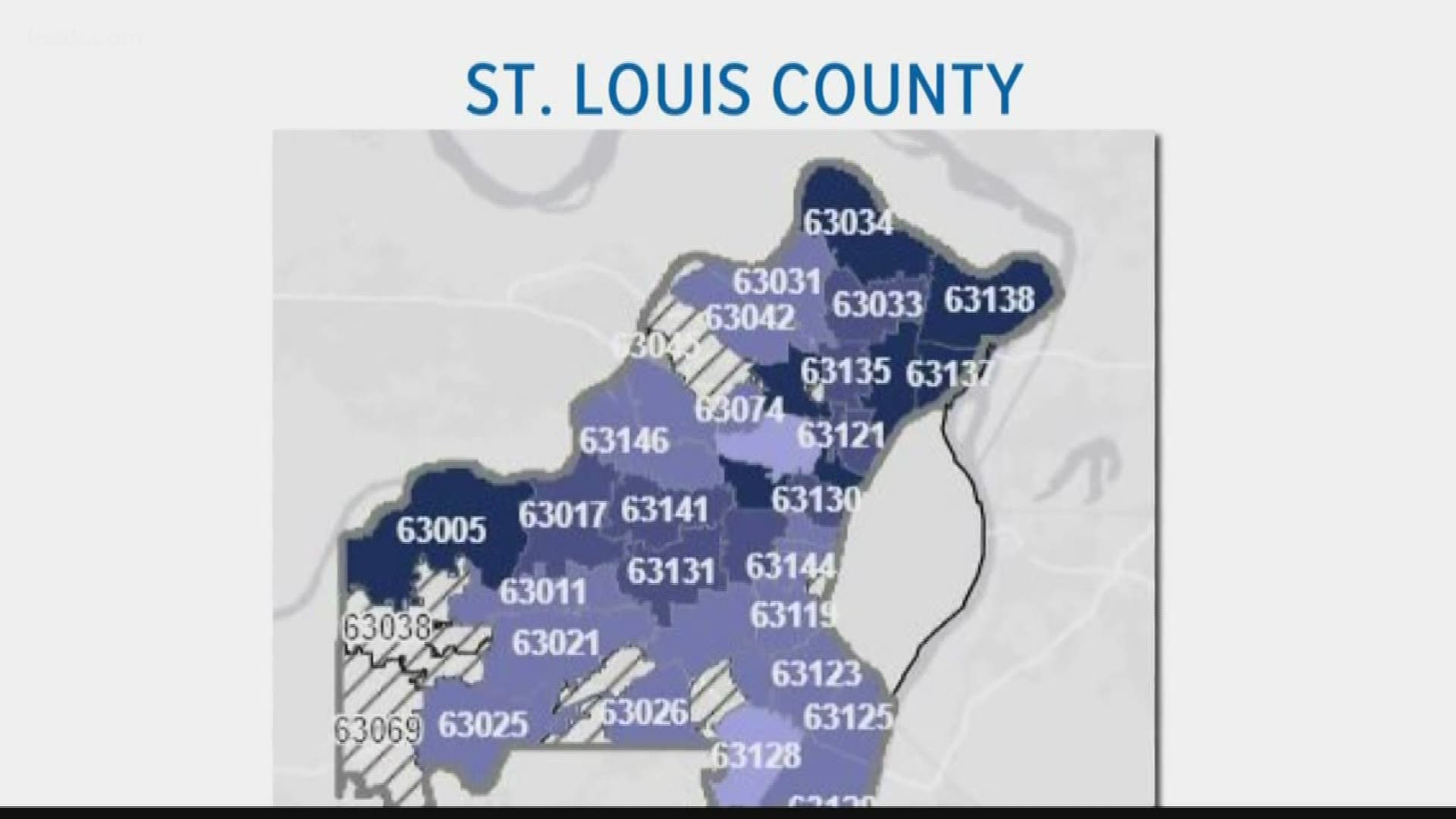