"How they tried to disarm the alarm, it made me wonder if this person was comfortable with doing this." 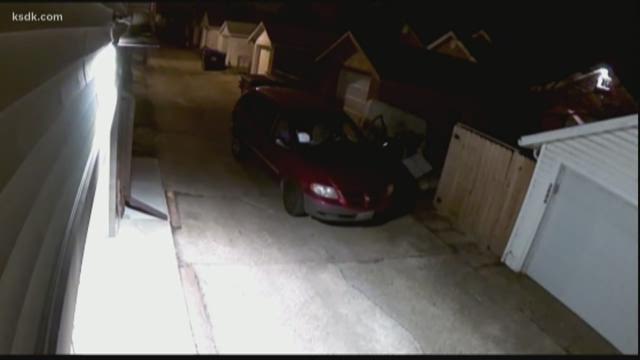 ST. LOUIS – A thief broke into a newly remodeled house and made off with a truckload. The entire crime took just one minute.

Early Friday morning on Burgen Avenue in the Holly Hills neighborhood, surveillance video captured a man in the alleyway, loading his mini-van with quite a bit of stuff.

"Even though this is not my home, it's definitely a violation," said Adam Kuene, who is the CEO of Armin Properties, the company that remodeled the home.

"There was a comforter, some bedside lamps, pillows, throw pillows, a rug, decorative shelves,” Kuene said.

“In this bedroom is where they took some artwork that was here, there was a really big three-piece picture that was stolen,” Kuene explained.

Kuene said that at least one person, broke through the basement window, walked up the steps, smashed the alarm and was able to unlock the back door.

“The whole process took about a minute for them to come in the house, gather up everything that they wanted, set some stuff by the back door that they planned on coming back for and loading all the stuff into the car,” he said.

Roughly $1,200 worth of property was loaded into the suspect’s mini-van. Kuene said he wouldn’t be surprised if this person had done this before.

“How they tried to disarm the alarm, it made me wonder if this person was comfortable with doing this,” he said.

But, Kuene said the good thing in all of this is that no one was home. And at the end of the day, it is just stuff.

“Truthfully, everybody has a part of their job that they hate, and this is one of mine,” he said.