Here's the 2021 cicada outlook for Missouri

What broods do we have around here and when will they emerge? 5 On Your Side asked the experts at the Missouri Department of Conservation as Brood X emerges out east 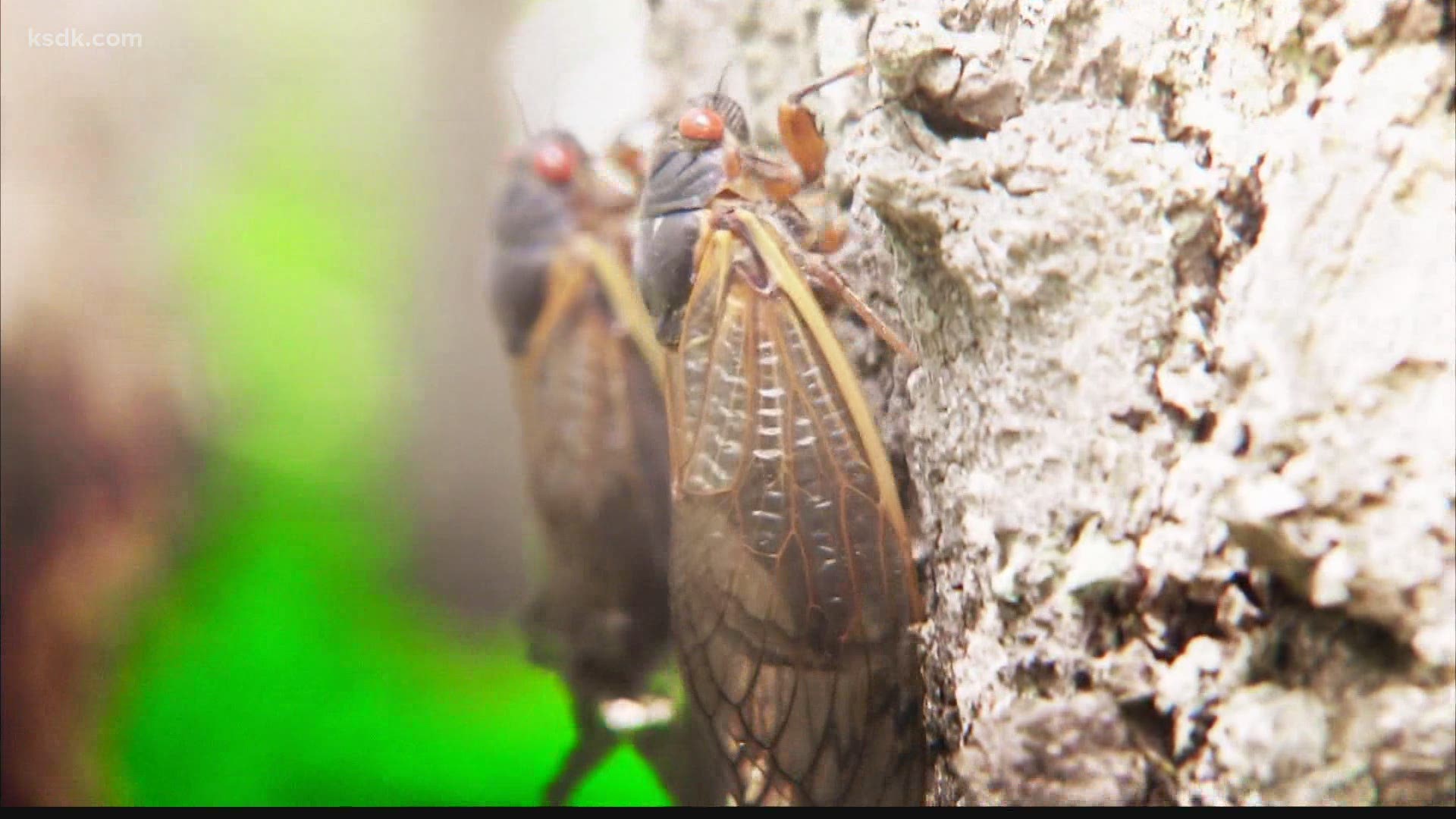 ST. LOUIS — Trillions of cicadas are beginning to emerge from their underground homes for the first time in 17 years, reminding Americans of their loud chorus of “singing,” skin shells and just overall creepiness.

2021’s brood will continue emerging throughout May and into June. The adults should be gone by July 4 after mating and laying their eggs. And then the 17-year cycle starts all over again.

Luckily for the St. Louis area, we shouldn’t see any of those Brood X cicadas. The closest they’ll be is in parts of eastern Illinois.

The USDA Forest Service map of periodical cicadas shows where they are and when they're expected to make their next appearance. Brood X is yellow on the map below.

Credit: USDA Forest Service
A look at the periodical broods of cicadas across the US

So, which broods are native to the St. Louis region and when will they make their presence known again? 5 On Your Side asked the experts at the Missouri Department of Conservation.

WHAT BROODS ARE IN THE ST. LOUIS AREA?

The main periodical cicada brood in the greater St. Louis area is Brood XIX (19). St. Francois County is the one (unlucky) county in the 5 On Your Side viewing area that’s home to two broods: XIX and XXIII (23).

Overall, there are four broods of periodical cicadas in Missouri:

Credit: USDA Forest Service
A map of periodical cicadas shows which broods are prevalent and where in the greater St. Louis area.

The last time St. Louisans experienced cicadas was in 2011 with huge numbers of Brood XIX.

But the most memorable cicada spring in recent memory might have been 13 years earlier in 1998. Brood XIX appeared in the same spring as the 17-year Brood IV, so cicadas spanned the whole state. A few counties even experienced both broods.

1998 was the two broods’ first convergence since 1777. Don’t worry though, we won’t have to deal with that again this century.

2015 was the only year in the 21st century when two broods emerged at the same time in Missouri; Broods IV and XXIII came out that year, but their territories are widely separated, with no overlap in the state.

WHEN WILL ST. LOUIS SEE ITS NEXT BROOD?

We have a few more years before we’ll hear that familiar hum of cicada songs. Brood XIX, the state’s largest brood, will return in 2024 to put on its impressive display once again. Dan Zarlenga of the Missouri Department of Conservation said it’s difficult to tell how many cicadas we can expect but that “it’s usually on the order of millions or more!”

Don’t be surprised if you see – or hear – some cicadas later this year. It’s not a rogue or lost bug, it’s one of the state’s annual cicadas. As their name suggests, they come out every year – as compared to the periodical broods that only appear every 13 or 17 years. They make their droning noise during the heat of late summer.

WHAT TO EXPECT WHEN CICADAS RETURN

“These insects are mostly an inconvenience,” he told 5 On Your Side. “They don’t cause harm to people or property, aside from cleaning them up or having to listen to the noise. The whole phenomenon is temporary when it happens though and is usually over by July.”

When they are here, expect to see them everywhere.

“There will be swarms on trees, bushes, in the woods and suburbs clinging to walls and outdoor structures, and maybe even in downtown green spaces,” Zarlenga explained. “We’ll also hear their raspy calls all day, which sound like a loud, continuous drone when in massive numbers.”

For more information about periodical cicadas in Missouri visit the Missouri Department of Conservation’s website.

The Associated Press and 5 On Your Side’s Tegna VERIFY team contributed to this report.