'The entire area is looking forward to it' | After tough last year, bars and restaurants near Nationals Park get set for Opening Day

Ahead of a limited reopening at Nationals Park on Opening Day, bars and restaurants continued to get excited on Tuesday to welcome back more crowds this week. 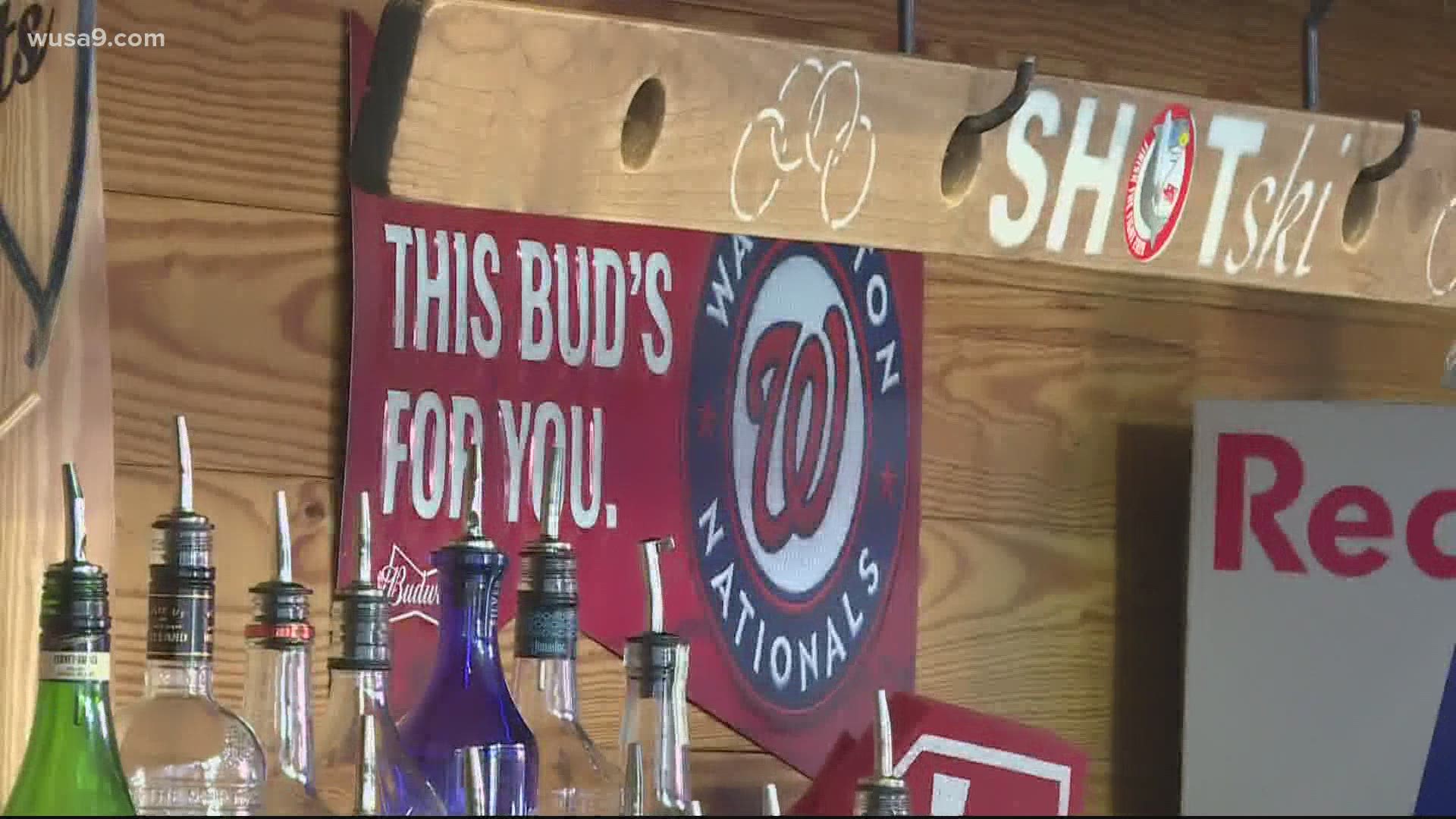 WASHINGTON — Ahead of Opening Day later this week, restaurants and bars near Nationals Park continued to get set on Tuesday to welcome back fans before the ballpark opens with limited seating to start the regular season.

Earlier this month, Mayor Muriel Bowser announced that 5,000 fans would be let into the park to watch baseball. While attendance will be notably low due to the COVID-19 restrictions, managers at nearby bars voiced excitement on Tuesday for the start of the season.

"We’re so close you can actually hear the crack of the bat within the ballpark," said Atlas Brew Works founder Justin Cox. "You can expect there to be a lot more people that are coming down just to watch the game near the ballpark.”

The timing could not have been worse.

"We opened this location by Nats Park literally the day before the shutdowns happened," he said on Tuesday. "We’ve never really known what this location is going to do. Our plan was completely thrown out the window.”

After navigating through all the pandemic restrictions and rules over the past year, Cox said the return of baseball season was a welcoming sign.

Staff set up a socially distanced patio outside, just blocks from Nationals Park.

Cox told WUSA9 that the team was also hoping to get a projector screen up so fans could watch the games.

Following such a tumultuous year, he said the expected crowds brought plenty of relief.

"It feels like the beginning of a new era," he said. "This is a very finite period of time and a finite event that hopefully is going to usher in more great things to come.”

Mission Navy Yard owner Fritz Brogan remembers the 1000s of fans his business saw during the Nationals 2019 World Series run. He said that fans in the stands, and the foot traffic it brings, are definitely great things for him and his employees.

"I mean, it's been a tough year for the restaurant industry, and you know, for all business in DC. I think our staff and regulars are really excited about having something to look forward to ... some optimism," said Brogan. "We never got a chance to really celebrate the World Series (at Nats Park the next season). I think it's really two things people are excited for ... one is to be back in the stadium. But two, see that championship banner be raised and be able to celebrate the World Series."

"We had dozens of people call and email us," said Brogan.

Brogan said Mission Navy Yard will capitalize off of its newer building and nine garage-style doors, to help keep its building COVID-friendly this baseball season.

"Navy Yard has relatively new buildings, so there's a lot more outdoor stuff built in. We have nine garage doors, we have a big inside-outside flow. So on a day like today (perfect sunny day), we'll have all of our garage doors open, said Brogan.

Mission has already optimized using QR codes and distances between tables, to help with social distancing.

A short walk down the street, staff at the Big Stick bar said the excitement for the season continues to build as it gets closer.

After opening several years ago, the bar was forced to close for eight months last year.

While the return of fans to National Park brings progress, general manager Antonio Hurley said the limited reopening of the stadium was a reminder that recovery for the local bars and restaurants in the neighborhood could take time.

"A lot of the dynamics you hope will work out," he said. "You only have 5,000 people. You don’t know how they’re going to react. Are they going to come early?”

The Big Stick currently must adhere to a 50% capacity limit, which Hurley said meant 50 people could be at the business at one time.

With the restrictions still being enforced, he said it would be important for fans to stay safe and follow the rules to allow for further reopening over the next few weeks and months.

"It’s not like we can host a huge amount. We’re cautiously optimistic," he said. "We’re hoping everyone is careful so we go from 5,000 to 10,000 and then in a couple months, we’re at full capacity.”

Above all else, Hurley said it would be nice seeing fans in red, white, and blue near Nationals Park for Opening Day after the past year brought plenty of hardship.