According to MAGA rally websites, several pro-Trump rallies are planned in the District leading up to the day Congress is set to certify the election. 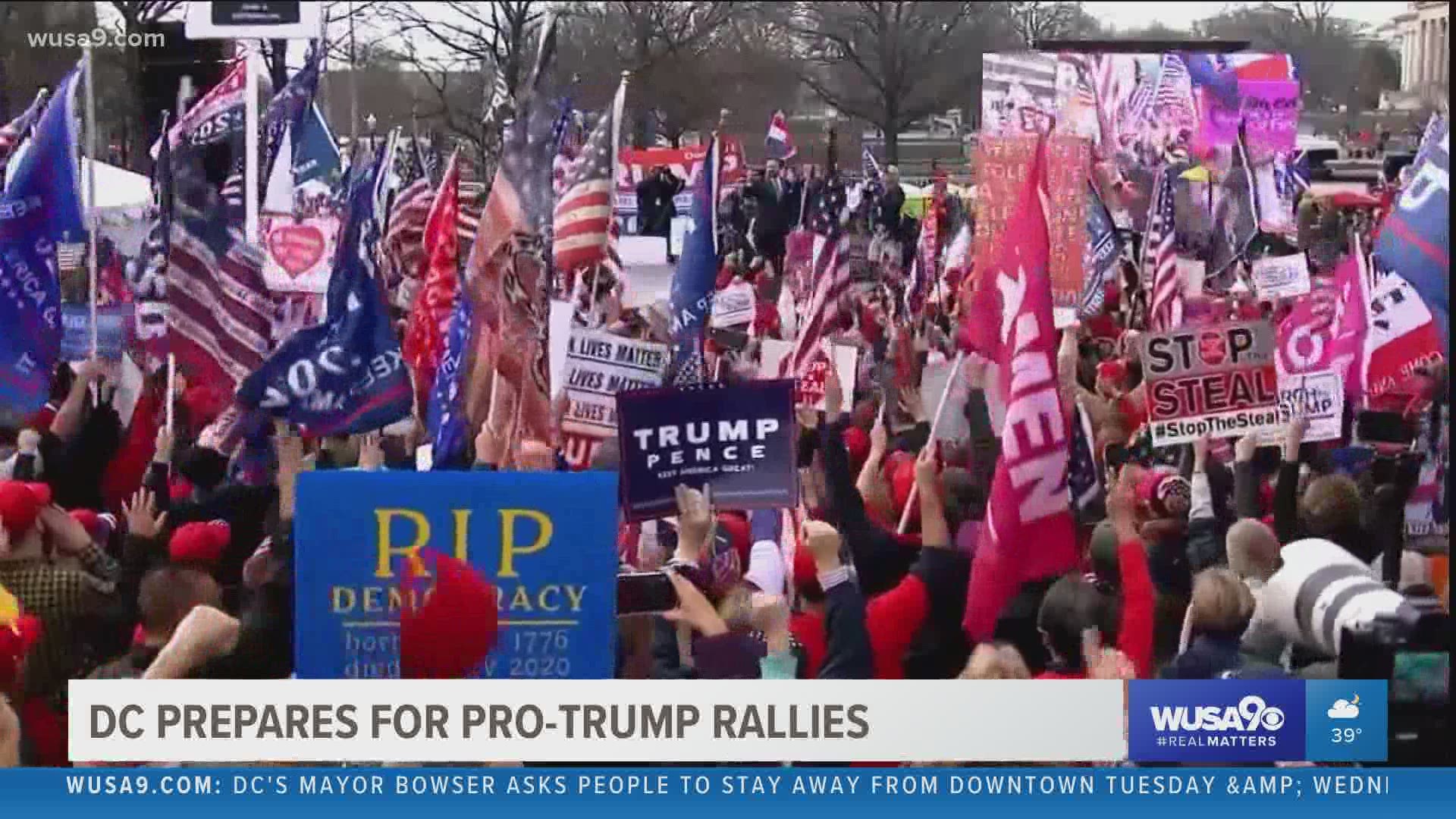 WASHINGTON — This week thousands of President Donald Trump supporters are planning to flock to D.C. to challenge the election results.

Trump supporters are planning to rally the same day Congress is set to certify the election, according to a flyer on the Trump March website.

The organization's website said they plan to "demand transparency and protect the election integrity" after President Trump warned via Twitter that there would be a "very big" and "wild" protest on Jan. 6 after he refuses to concede due to unfound allegations of election fraud.

In preparation for MAGA supporters to make their way to D.C. new signs have been posted along central rally locations that outline no guns are allowed.

"Members of the public and anyone attending the events are reminded that District law prohibits anyone from carrying a firearm within 1,000 feet of any First Amendment activity," a statement from D.C. Mayor Muriel Bowser said. "Under federal law, it is illegal to possess firearms on the U.S. Capitol grounds and on National Park Service areas, such as Freedom Plaza, the Ellipse, and the National Mall."

Signs have been posted around Freedom Plaza, where rallies are scheduled to be held, reminding visitors all firearms are prohibited within 1000 feet. Under federal law it is illegal to carry guns on US Capitol grounds and on National Park Service areas such as the National Mall pic.twitter.com/UHAjgaIeSb

RELATED: 'Your silence is violence' | Black Lives Matter DC calling on nearby hotels to shut down for upcoming protests

In a statement released by D.C. Mayor Bowser's office on Sunday, the mayor said the Metropolitan Police Department will be fully activated and she’s instructed District agencies to create a public safety response.

"We're very concerned with the violent MAGA protesters who are coming into town,” Taylor said. “Last time they were in town they assaulted innocent bystanders, they desecrated their Black Lives Matter signs setting them on fire. This is targeted terror, it's white supremacist terror and knowing this, Donald Trump has repeatedly cheered for and rallied and called on people to flood the streets."

Peter Navarro releases 36-page report alleging election fraud 'more than sufficient' to swing victory to Trump https://t.co/D8KrMHnFdK. A great report by Peter. Statistically impossible to have lost the 2020 Election. Big protest in D.C. on January 6th. Be there, will be wild!

The Chairman of the ProudBoys, an all-male, far-right organization the Southern Poverty Law Center designated as a hate group, said on the social media app Parler the group would be planning to come to D.C. incognito this week.

As for organized rallies that are planned, a spokesperson for the group Eighty Percent Coalition, which has a rally planned this week, said 1 million people are expected in D.C. on Jan. 6. The spokesperson also said President Trump would be speaking at one of the week’s planned events.

In a statement from MPD it said it is the department’s duty to protect the well-bring of all residents, visitors, and demonstrators who come to exercise their First Amendment rights. The statement said in part, “While MPD does not discuss operational tactics, as with any known, large demonstration, we will continue to monitor and assess each activity, and plan accordingly with our local and federal law enforcement partners,” a statement said.

Mayor Bowser said in a statement Sunday MPD and the Homeland Security and Emergency Management Agency are coordinating with District and federal authorities to keep residents and businesses safe. The mayor also called on people to avoid the downtown area during the rallies.

“I am asking Washingtonians and those who live in the region to stay out of the downtown area on Tuesday and Wednesday and not to engage with demonstrators who come to our city seeking confrontation, and we will do what we must to ensure all who attend remain peaceful," Bowser said.

The United States Capitol Police also provided WUSA9 with a statement that reads, “While we do not discuss the means, methods, or specific resources used to carry out our protective responsibilities, the United States Capitol Police has comprehensive security plans in place and we continuously monitor and assess new and emerging threats, with the overall goal of keeping those within the Capitol Complex safe and secure.”