Unmarked, armed riot officers seen around D.C. won't say what agency they are from

The Bureau of Prisons says special operations resource teams have been deployed to the District, but won't confirm if they are shown in pictures. 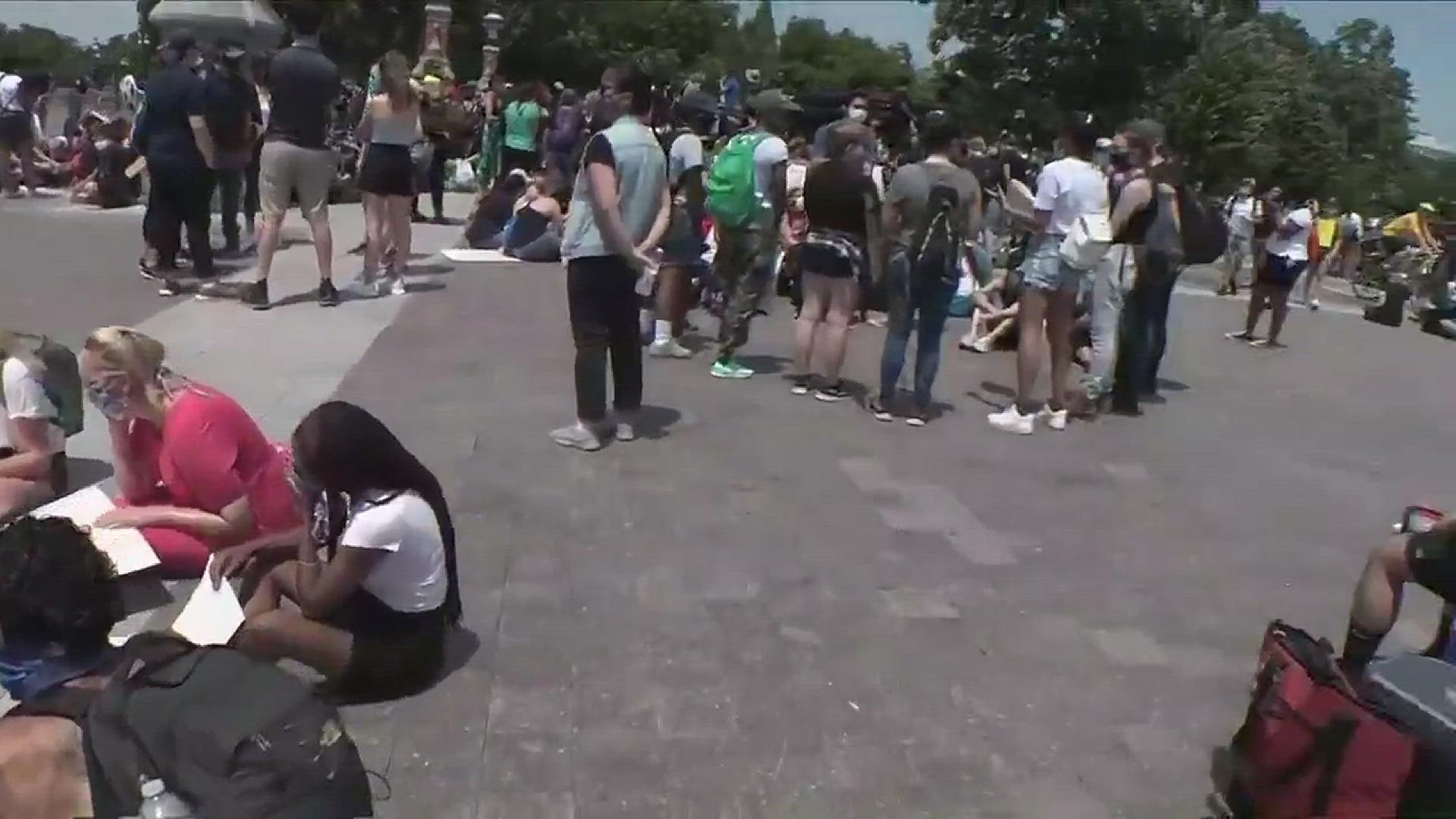 WASHINGTON — Update: The Bureau of Prisons has confirmed to CBS News that the riot officers in D.C. who have been unwilling to identify themselves are BOP employees.

Armed riot officers without identifying marks or badges began manning the perimeter around the White House Wednesday morning, and now a Virginia congressman says he is working on legislation to stop it from happening again.

The unmarked security forces appeared early Wednesday following a calmer night in D.C. than the city had seen in recent days. However, unlike MPD or Capitol Police officers, these men manning a pushed-back perimeter around the White House wore no badges, nameplates or any other identifying marks or insignia. In pictures posted to social media, most can be seen wearing plain t-shirts under their riot gear.

When asked by members of the media and other citizens what agency they were with, the security officers would only say “the federal government” or the “Department of Justice.”

D.C. Code requires MPD personnel policing First Amendment assemblies to be equipped with “enhanced identification” that would allow them to be identified, even in riot gear. That rule does not apply to federal law enforcement officers.

Credit: WUSA9
Unmarked federal law enforcement officers are shown here manning a perimeter during protests in Washington, D.C., on June 3, 2020. Insignia and nameplates have been removed or covered up, however, one riot shield bearing the word "corrections" is visible.

On Tuesday, Attorney General William Barr announced he would send Bureau of Prisons riot teams to the District in response to protests in the city. These teams, called special operations response teams (SORT), are normally used almost exclusively for dealing with violent incidents at federal correctional facilities. In 1992, following the acquittal of the officers involved in the fatal beating of Rodney King, BOP dispatched SORT officers to Los Angeles to protect federal facilities in the city.

WUSA9 reached out to the BOP to see whether the unmarked officers in the photos were BOP special SORT members – and whether they had been instructed not to identify themselves.

The BOP responded with a statement only confirming that SORT members were deployed in D.C., but not whether any of the officers captured in photos were part of these teams:

“The Bureau of Prisons (BOP) has specialized Crisis Management Teams (CMTs), including Special Operations Response Teams, which are highly trained tactical units capable of responding to prison disturbances, and providing assistance to other law enforcement agencies during emergencies. The BOP's CMTs also include Disturbance Control Teams, that specialize in crowd control scenarios.

Per the request of the Attorney General, the BOP has dispatched teams to Miami, Florida, and Washington, D.C.

We cannot verify the individuals in the photos you referenced. For safety and security reasons, we are not providing more specific information about law enforcement operations.”

Late Wednesday evening, after WUSA9 published this story, the BOP confirmed to CBS News that the riot officers were their employees, saying in a statement that they weren't wearing marked clothing because they were "serving a broader mission."

By mid-afternoon, at least some of the unmarked officers had been replaced by clearly marked military police officers from Fort Drum, but others were still posted at the perimeter near 15th and H Streets.

In response to photos and reports about the unmarked security officers flooding social media, Virginia Rep. Don Beyer (D-VA 08) tweeted that he was working on legislation to prevent similar actions in the future, writing that it was “unacceptable for uniformed federal officers policing constitutionally-protected assemblies to refuse to identify themselves to people who pay their salaries.”

On Thursday, more than 120 members of the House, led by Reps. Jamie Raskin (D-MD), Donald Beyer (D-VA) and Eleanor Holmes Norton, sent a letter to Attorney General William Barr demanding that he restores the identifying information to the uniforms of all DOJ personnel in D.C.

"The public must know in all cases whether individuals purporting to enforce the law by detaining citizens or using force against them are actually authorized to do so—and by whom," the letter read. "This is critical to police accountability to the people."

Active duty troops have been deployed outside of the city to assist with civil unrest if needed, but were, according to reports by the Associated Press, supposed to begin returning to their home bases. However, on Wednesday afternoon, Secretary of Defense Mark Esper told the AP that he was reversing that decision and keeping them deployed.

RELATED: Half of the people arrested during DC's protests this weekend were charged with felony rioting. Here's what that means

RELATED: Outside agitators? Among arrests at DC protests we found... one