Dog rescued after being shot, beaten with hammer and left for dead, man charged

"As soon as I saw Trooper, I fell to my knees, I could not believe the condition of this dog." 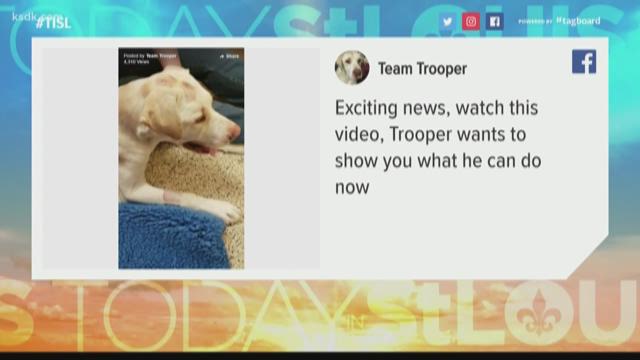 Warning: This story contains graphic images and some may find them to be disturbing.

ST. FRANCOIS COUNTY, Mo. – A brutal case of animal abuse was discovered when a woman found a dog shot, beaten with a hammer and left for dead in a ditch.

"As soon as I saw Trooper, I fell to my knees, I could not believe the condition of this dog,” Katrina Campbell said.

Campbell has rescued dogs for years, but a week ago, a yellow lab changed everything.

Trooper was in bad shape. Campbell found him along a country road south of Farmington.

“He laid right here for several weeks," she said.

Trooper was covered in feces and urine. It was so bad, it had burned through his flesh.

“You can see where he had been chewing on several things like right down here," she said.

Barely alive, they later found out, Trooper was dumped there with no food, and nothing but rain water for nearly three weeks before he was found.

“It was almost like lifting a carcass, there was nothing to him."

“I just asked him to give me some sort of sign that he wasn't ready to give up. That's when he lifted his head and he licked me on my face and I knew right then, I had to fight for this dog,” Campbell said.

At first, they thought a car hit Trooper but later found someone shot him, and paralyzed him.

"It is definitely the worst one I have dealt with in this rescue," said Mandy Ryan. She is with Missouri K-9 Friends rescue.

After some investigating, she found the man who admitted to the brutal shooting and beating.

“He answered the phone, I introduced myself and I asked about Trooper, and he immediately stated, ‘well, I'll tell you right now it was me. I shot that dog and I hit him in the head with a hammer.”

Since charges have not been filed, 5 On Your Side isn't releasing the man's name.

Ryan said no living thing deserves this treatment, and she hopes justice is served.

As for Trooper, she said he's a fighter and has come a long way in just a week.

“The fact that he didn't die that first night is completely a miracle,” she said.

If you'd like to help trooper, Urban Chestnut Brewing Company on Washington Avenue is having a fundraiser to help pay for his medical bills on March 9 at 5 p.m.

While Trooper has a long road to recovery, he'll have no trouble finding a home, they already have 20 adoption applications.

On Thursday, Jason Edward Hampton was charged with animal abuse.