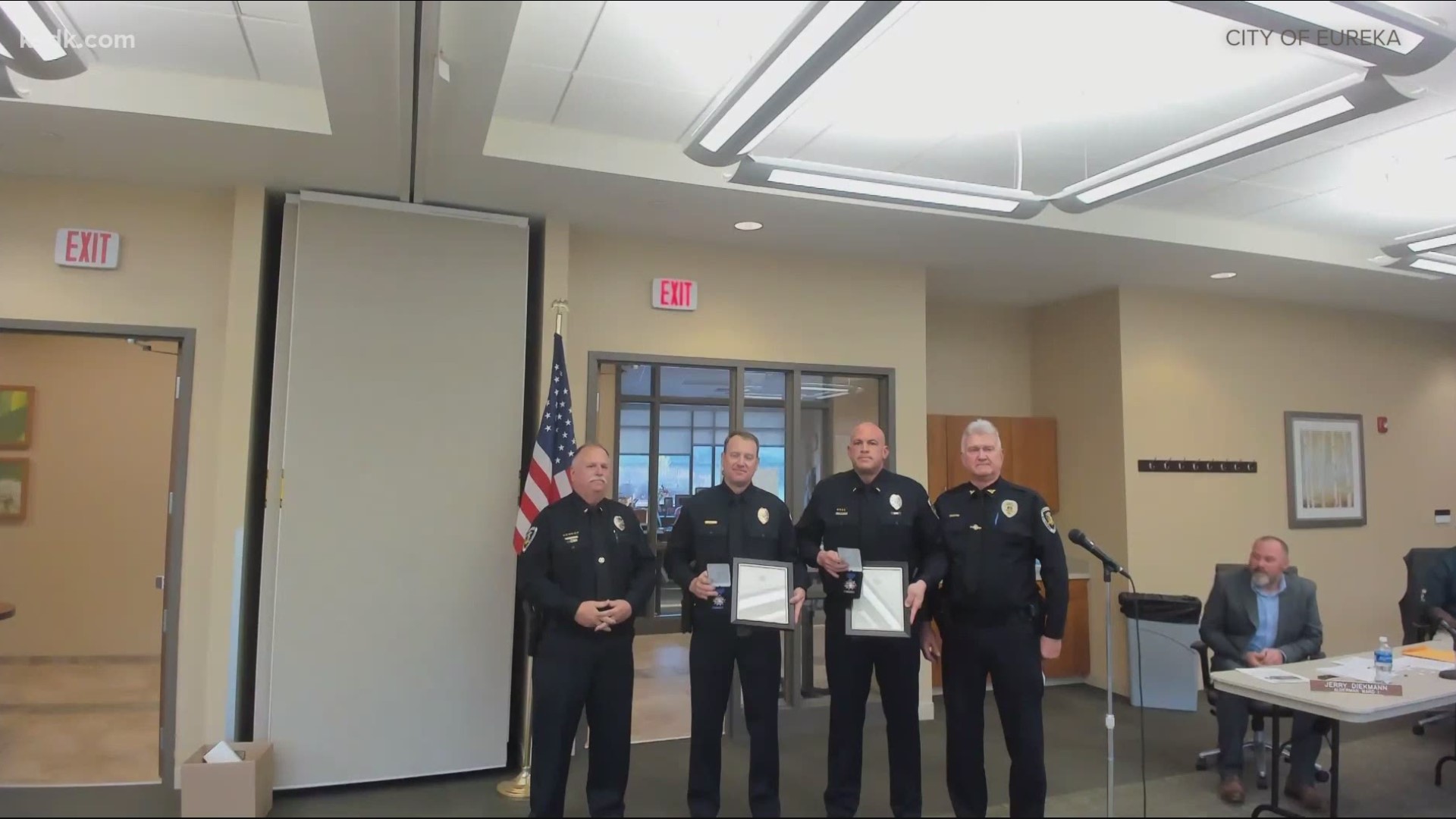 EUREKA, Mo. — Jean Anderson remembers the moment she got separated from her husband and her son after she realized their house was on fire. She went to the back of her home to call for help, turned back and saw a wall of fire separated her from them.

She has a prosthetic leg. She couldn't find her prosthesis or her crutches. Black smoke was billowing around her.

Meanwhile, Eureka police officer Tim Shipp was working a security job at a business about three blocks away when he heard the call to Anderson’s house come across the scanner inside his take-home patrol car.

He raced to her house and pulled up to an inferno.

"Whenever I was arriving or pulling around the corner, I saw the house was fully involved," Shipp said.

Justin Flynn ran up to Shipp, telling him an elderly woman was still inside and the two raced to the back of the house.

The men went in, but flames and smoke forced them out the first time.

And a third time.

On their fourth attempt to find Jean Anderson, she heard Shipp’s voice telling her to wave her hands if she was inside.

“That’s what I did and that’s how he found me in the darkness,” she said of the Jan. 26 blaze.

"I was able to follow her voice as she called out to me,” Shipp said. “I got on my hands and knees and crawled through two rooms. I couldn't see anything in front of me, a really heavy dense smoke."

Shipp’s dashcam captured the rescue as the men dragged Jean Anderson to safety, each holding one of her arms and putting her down on the ground at a safe distance from the burning home. 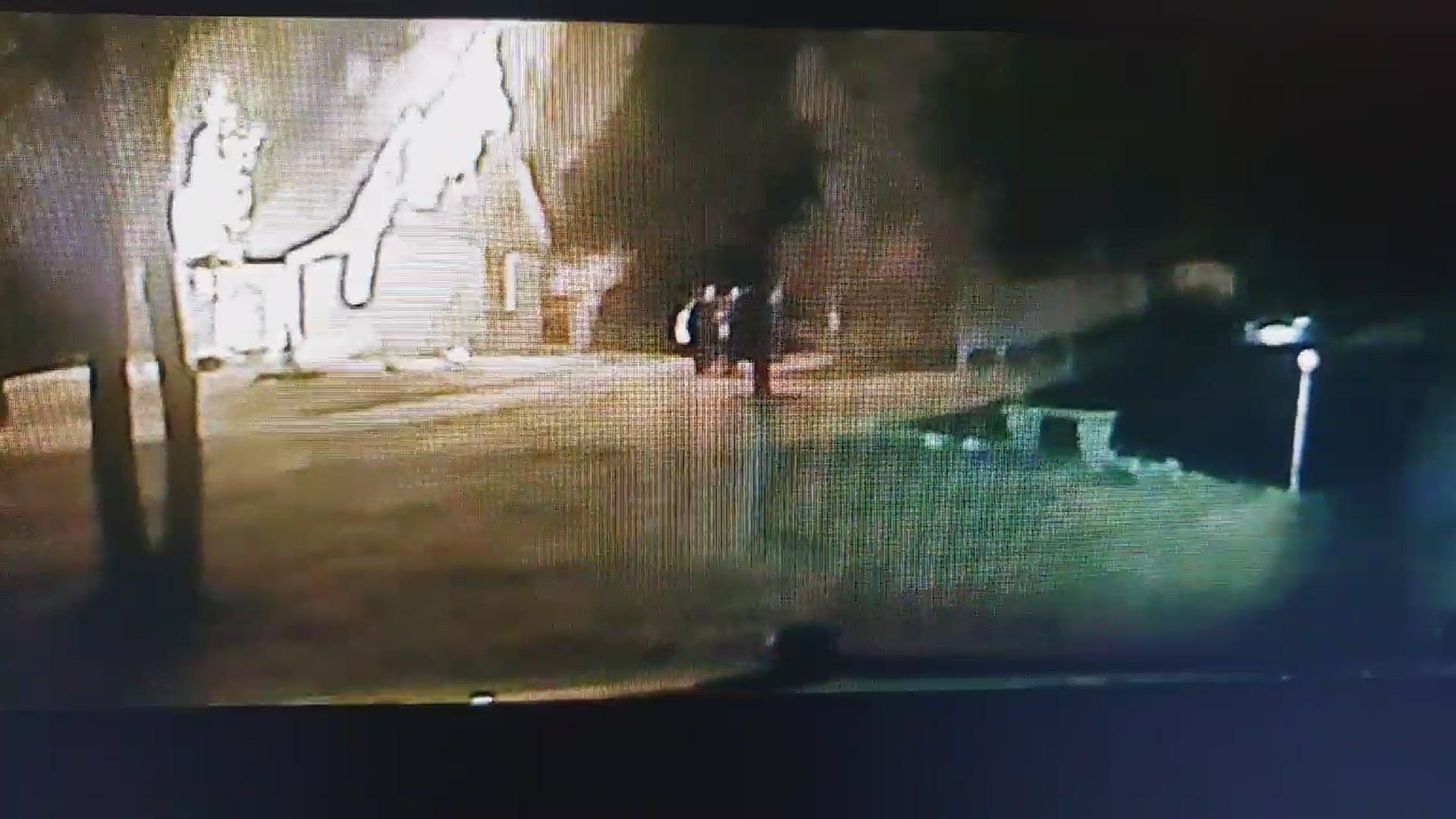 Shipp and Flynn are among four people the Eureka Police Department honored Tuesday at a ceremony at the Timbers Recreation Center. Flynn received a Citizen’s Service Citation, while Shipp and two of his fellow officers who assisted on an unrelated call were given Medals of Valor.

Shipp told 5 On Your Side he is thankful Anderson survived and is OK, and he's grateful for being recognized for his actions that day.

"Without Officer Shipp coming through the smoke and debris with no flashlight or anything, I wouldn’t be here now,” Anderson said. “He saved my life. He was very brave. He didn’t care about himself, he cared about getting me out. I am very grateful. It was very scary.”

Lt. Michael Werges and Sgt. William Knittel are being recognized for their role in rescuing two children from a home in which a man was pointing a gun at a woman inside the home and threatening to kill himself if police arrived.

Knittel approached the front door to the home on Feb. 18 and a woman told him a man was holding a gun to his head inside and ran farther into the house. Knittel heard a gunshot from her direction and saw a different woman and two men run toward the front door of the house.

The woman who was still inside told him there were two small children inside along with a woman being held hostage.

Werges then arrived and he and Knittel went in to rescue the children. Werges tried to negotiate with the armed man, while Knittel searched the house and found the two children and carried them out to safety.

A second shot rang out and, as Werges tried to enter the room with the armed man, the woman he was holding hostage ran out of the room and they all left the house.

After several hours of negotiations, the armed man came out and surrendered, according to police.