A Ferguson woman is worried that water rolling down the hill from her neighbor's house could wash her home right out from under her. 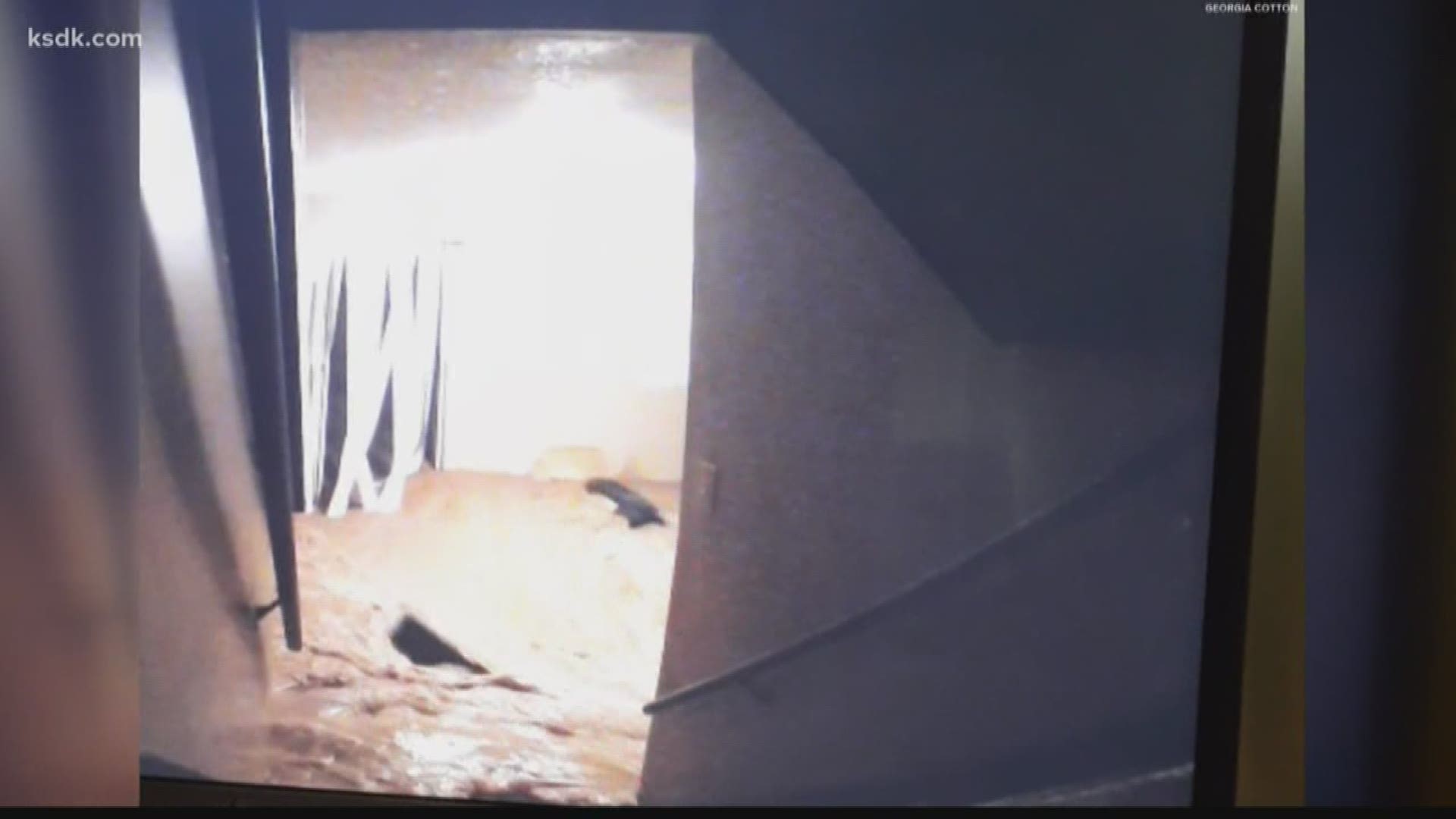 FERGUSON, Mo. — A Ferguson woman is worried that water rolling down the hill from her neighbor's house could, quite literally, wash her home right out from under her.

And, she said no one at city hall is holding her neighbor accountable, who just happens to be a former member of the local school board and a current candidate for state representative who said he, too, is a victim of the flooding.

In August floodwater forced its way into Georgia Cotton's house and turned her life upside down.

"It wiped out my computer room," along with a finished bathroom and basement family room said Cotton as she pointed to damage and drywall that had to be removed for mold.

Recently, she said family and friends finally got all of the mud, and crickets, and gnats out of the house.

But she still can't stay here because the flood also knocked out her furnace and hot water.

She said since she didn't live in a flood plain and flood insurance wasn't required, she didn't have it. Now her insurance company won't cover the damage.

"I try to stay positive but I cry easily because I've worked so hard to try and keep my property up and take care of my things," Cotton said through tears. "It's very disheartening."

Who's to blame? Cotton says a Ferguson city inspector pointed her uphill to her neighbor's house and a drain that is running from his property toward hers.

The house belongs to Mike Person who just happens to be running for state representative and who just happened to come home when 5 On Your Side stopped by to investigate.

"You can't block the road here," Person could be heard telling a reporter before he said, "I'm not answering any more of your questions until I talk to my lawyer."

Ferguson's city administrator Jeff Blume said the city is aware of the problem and said Mike Person has a "thick folder" of citations from the city. Blume said Person won't let city workers on his property to figure out the source of the flooding.

Blume said Person is due in Ferguson municipal court next week where Blume hopes a judgement in the city's favor will expedite a resolution.

After a phone call, Person met 5 On Your Side at the end of his drive way. Person said he's not the problem, but also a victim of the persistent flooding.

Person said the flooding is coming from a nearby apartment complex and blames the Metropolitan Sewer District and the Ferguson city inspector.

"He has sold them on, 'Hey, it's his fault.' When it's his responsibility to get with MSD or the city and say hey we have a water runoff problem," Person said as he pointed out standing water on his property.

Person declined to talk specifics about city fines or Blume's claims that Person wouldn't let city workers inspect his property. He says he hopes to have his side of the story heard in court.

She's worried she'll lose her home before anyone takes her problems seriously. While this latest flood is the worst, it isn't the first. She said the problem started about four years ago and claims to her insurance have raised her insurance rates so much that she's not sure how much longer she can pay the mortgage.

"I've got to get it taken care of and I don't have that kind of money."

MSD told 5 On Your Side it will look into the problem, but a spokesman said it's possible that it could be a storm water issue that the agency can't fix because it’s not funded for those kinds of problems.

Co-workers have started a GoFundMe to help with the damage.