The Cardinals dominated the Pirates this season, capturing 14 of the 19 meetings.

PITTSBURGH (AP) — Jack Flaherty had another strong start in his scintillating second half, scattering five hits over eight electric innings to lead the St. Louis Cardinals to a 2-0 win over the Pittsburgh Pirates on Sunday.

The 23-year-old Flaherty (10-7) struck out 10 and walked just one to win for the sixth time in his last eight starts and drop his post-All-Star break ERA to 0.76. Carlos Martinez worked a perfect ninth inning for his 19th save. St. Louis has won 8 of 11 overall.

The Cardinals dominated the Pirates this season, capturing 14 of the 19 meetings.

Paul Goldschmidt had an RBI double for St. Louis, and Harrison Bader added a run-scoring single off Pittsburgh rookie James Marvel (0-1). Matt Carpenter went 2 for 3 while starting at third base and is hitting .400 (6 for 15) in September as the veteran tries to shake out of a season-long slump.

Marvel, a 36th-round pick in the 2015 draft, was solid in his first major-league start after piling up 16 victories across Double-A and Triple-A this season. Marvel gave up two runs and five hits in five-plus innings with two walks and two strikeouts.

It just wasn't quite enough to keep pace with Flaherty, who has given up just three earned runs in his last 56 innings dating back to Aug. 1.

The Pirates had their chances. Kevin Newman led off the first with a double but never advanced. Jose Osuna doubled leading off the fifth and Miguel Cabrera followed with a single but Flaherty escaped after Jacob Stallings hit into an inning-ending double play.

Pittsburgh manager Clint Hurdle and second baseman Adam Frazier were both ejected in the seventh inning for arguing balls and strikes. Hurdle was tossed by home-plate umpire Roberto Ortiz after Ortiz called a borderline pitch to Frazier a strike. Frazier followed Hurdle to the clubhouse moments later when he disagreed with Ortiz after taking a called third strike at the bottom of the zone.

Flaherty made his 10th scoreless start for the Cardinals, tied with Mort Cooper in 1942 for fifth-most in franchise history. 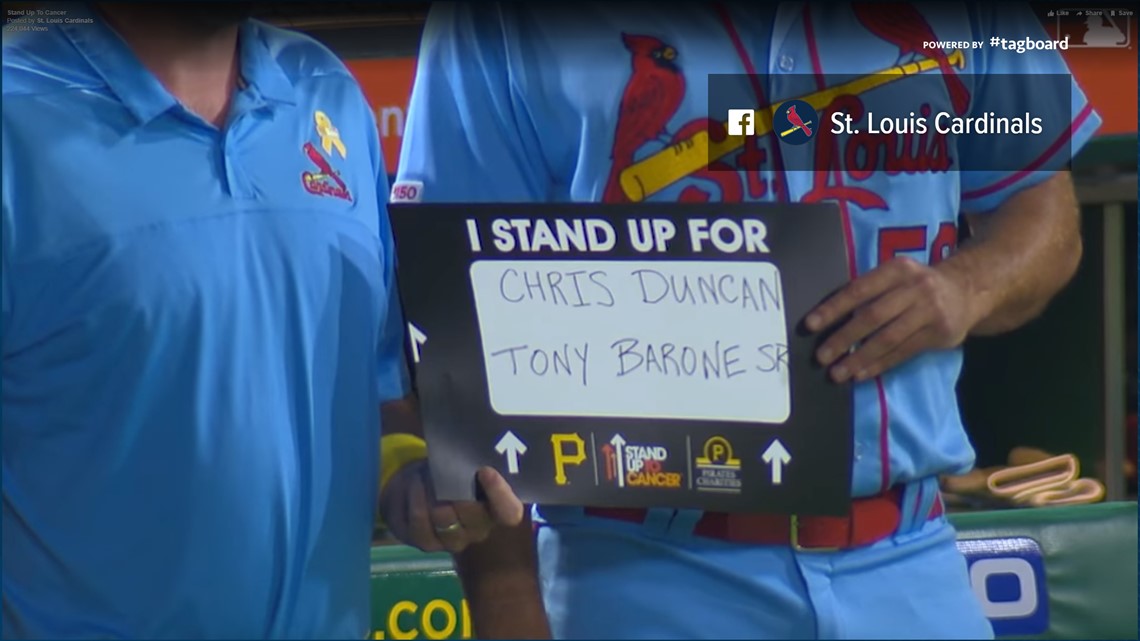 Wainwright, Eckstein honor Chris Duncan's memory during Cards-Pirates game in Pittsburgh
PITTSBURGH - An entire stadium in Pittsburgh and Cardinals fans all over the world took a moment to remember the late Chris Duncan Saturday night. The former Cardinal died from brain cancer Friday evening. He was 38 years old. The news came while the Cards were on the road in Pittsburgh.

Cardinals: C Matt Wieters was unavailable on Sunday. Manager Mike Shildt declined to provide specifics. Wieters is expected to be available on Tuesday in Colorado.

Pirates: 1B Josh Bell was given a scheduled day off. ... OF Jason Martin was moved to the 60-day injured list with a dislocated left shoulder. ... RHP Yefry Ramirez (right calf strain) was activated off the 10-day IL.

Cardinals: Start a three-game set in Colorado on Tuesday with Michael Wacha (6-6, 4.98 ERA) on the hill.

RELATED: Gone but not forgotten: How Chris Duncan chased and fulfilled his dreams