In the days and weeks following Officer Mike Flamion's July 8 shooting, there wasn't much to smile about. But on Tuesday that all changed when he and his wife Sarah saw, for the first time, the wheelchair-accessible smart home being built especially for them. 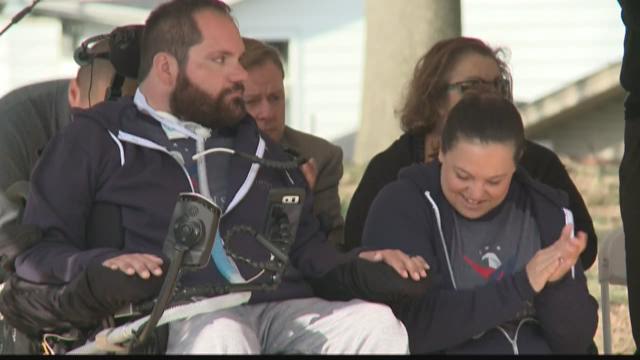 More than eight months after Ballwin police officer Mike Flamion was shot in the line of duty, he and his wife got the official plans for their brand new smart home. The team behind the project broke ground on the property Tuesday morning.

It was a hero's welcome as the Flamions were escorted by the Patriot Guard Riders to the place they'll soon call home. A crowd of hundreds was there to welcome the couple.

In the days and weeks following Flamion's July 8 shooting, there wasn't much to smile about. But on Tuesday, that all changed when he and his wife Sarah saw, for the first time, the wheelchair-accessible smart home being built especially for them and designed to give Mike a certain level of independence.

“I’m going to be able to do a lot of things from my iPad or my phone and give Sarah a little bit of a break,” said the officer.

And the couple already have their favorite parts of the home.

“I can't wait to get on that patio and grill. Throw a pork steak on the grill and hang out,” said Mike.

“Probably a big kitchen,” Sarah said with a laugh. “I like to cook.”

The project is made possible by the Gary Sinise Foundation's R.I.S.E. Program and Flamion's is the first home of its kind built for a first-responder.

“It means a lot to us,” said R.I.S.E. Program Operations Director Steve Schaeperkoetter. “We're used to working with our veterans who defend our freedoms. But now we're able to pay that forward to our first responders.”

As the ceremonial groundbreaking took place the crowd was reminded of the importance of supporting the men and women in public service.

“While we can never do enough to show our gratitude to our nation's defenders, we can always do a little more,” said Judy Otter, Executive Director of the Gary Sinise Foundation.

And those in attendance, no matter where they're from, were inspired by the words of Ballwin police chief Kevin Scott.

“Today, no matter where you live in this country, we are all Ballwin strong!”

In November, a local family sold their property to make way for Flamion's new home. They told 5 On Your Side they are so happy the land will go to a good cause.

The Flamion's will move into their new home this fall.