The school district is hoping that extending the weekend by an extra day will encourage teachers to stay.

HILLSBORO, Mo. — Thousands of students and parents in one Missouri district will find the school week shortened to just four days.

At the February School Board meeting, the school board voted 5-2 to approve a four day week for the 2019-2020 school year.

Superintendent Matt Zoph said in a letter sent to parents that "the vote is an attempt to address the decade old problem of the inequity in teacher pay between our district and the surrounding school districts." 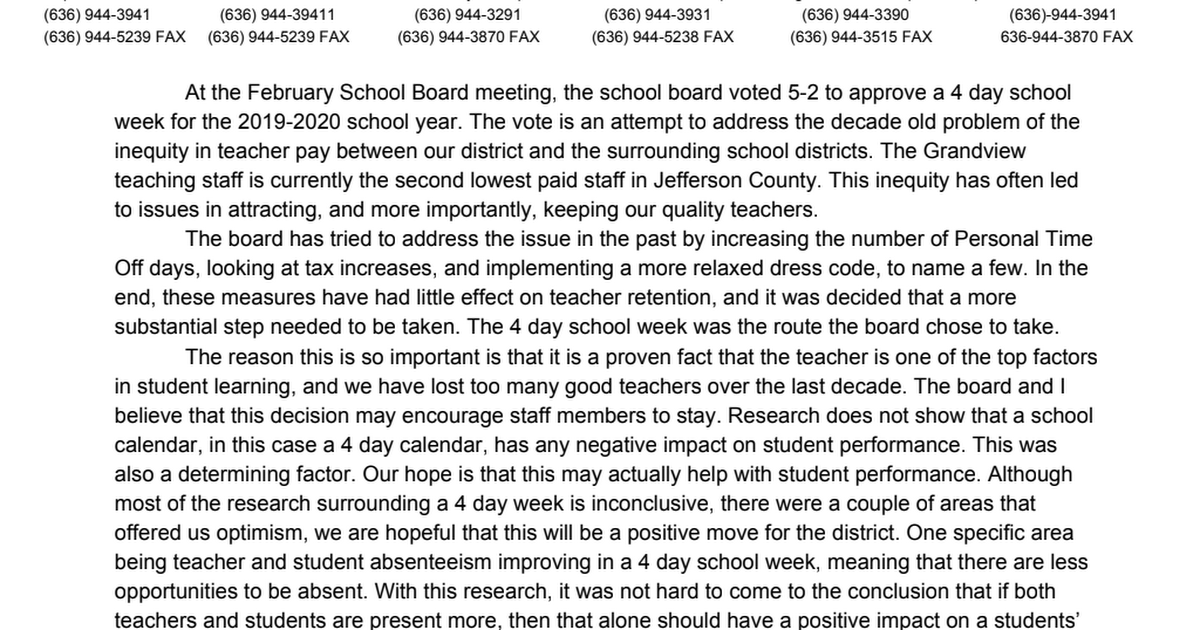 A letter from Superintendent Matt Zoph 2/22/19

He added that the Grandview teaching staff is currently the second lowest paid staff in Jefferson County and said that inequity has often led to issues in attracting, and more importantly, keeping our quality teachers.

Christina Pfohl is a life-long resident in Jefferson County. Her three children attends Grandview schools. She told 5 On Your Side she has big concerns about the a four-day school week.

"It's going to impact parents negatively I believe," she said. "I think in the end it's going to hurt them because they need all that. They need that constant guidance."

In the letter, Zoph said the board had tried to address the issue in the past by increasing the number of personal time off days, looking at tax increases, and implementing a more relaxed dress code, but in the end, the measures had little effect on teacher retention, and it was decided that a more substantial step needed to be taken.

Grandview R-II School District
Here is the 2019-2020 calendar approved by the Board on February 21 mentioned earlier.

"The board and I believe that this decision may encourage staff members to stay," he said. " Our hope is that this may actually help with student performance."

While Pfohl said she would have the luxury of being able to watch her kids when they're not in class, she's worried about other parents will take care of them children.

"Most parents would either have to find another babysitter that day or take off work or who knows leave the kids home alone," she said.

In the event of weather, Zoph said the district would make up snow days starting the last Monday in May and work backwards making up days on Mondays that we have scheduled off, so that the last day of school remains consistent with the original 4 day calendar.

He added that the district is currently sending out child care surveys to parents to see how they can help them when school is out of session.