St. Louis County director of diversity says she's been relieved of her duties by county executive

Erby tweeted that St. Louis County Executive Sam Page said, “I do not need you on my staff anymore!” Page responded to the tweets Wednesday morning 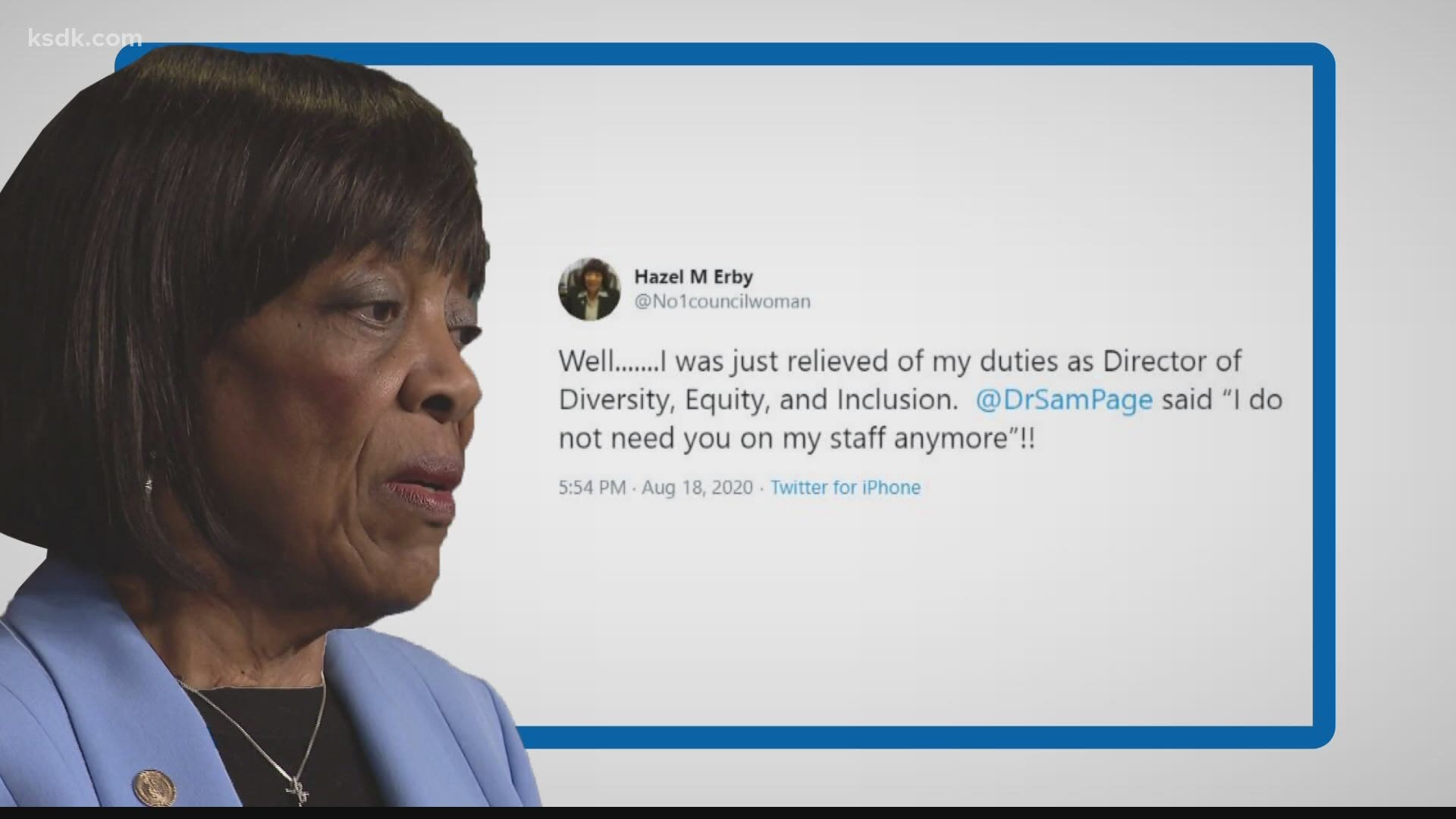 According to a tweet by Hazel Erby, she was relieved of her duties as director of diversity, equity and inclusion for the county. She tweeted that St. Louis County Executive Sam Page said, “I do not need you on my staff anymore!”

Another tweet followed, “I will not be silent! Blacks are NOT valued in this administration, particularly black women!”

Erby was named the director of diversity in May 2019. Prior to her director position, Erby had been on the county council since 2004 and made history as the first African American female to serve on the council.

I will not be silent! Blacks are NOT valued in this administration, particularly black women!

St. Louis County Executive Sam Page answered questions about Erby during his scheduled COVID-19 briefing Wednesday morning. Page said he's known her for a long time and added that she was his first choice to lead the new St. Louis County Department of Diversity, Equity and Inclusion. Page said he doesn't regret that choice but he's looking for a change.

"Now I'm looking for more focus in that department and the ability to accomplish even more," Page said.

When asked if Erby was fired, Page said she was aware staff changes would be made this week.

"I told her that we would not need her anymore in our department, in our office, and that we would be moving forward and I thanked her for her service to our community," Page said he told her in a phone call Tuesday night. He added that she wanted to be the first person to let residents know about the change.

In response to Erby's statement that Black employees are not valued in the county, Page said he "can't respond to all the wild accusations" and repeated that he doesn't regret choosing Erby as his first leader of the diversity department.

"Kenny Murdock really cares about the black community. I have total confidence that he will be able to effectively address inclusion and diversity in his new role. As long as he does that, NAACP St. Louis County will be there to support those efforts. We need true inclusion, not just selective inclusion."

"I have always stood for social justice in my community. In this new role, I will seek to promote justice inside and outside of government. Everything is a learning experience. I will take what I’ve learned in my work with NAACP St. Louis County as 2nd Vice President and apply that to my new role as Director of Diversity and Inclusion. I will continue serving the community and fighting for what is right."

Erby declined to do an interview with 5 On Your Side shortly after the tweets, saying she is still trying to process what happened.

These were the recommendations made by Erby in a letter on Aug. 12.

"This appointment will benefit so many residents of St. Louis County, who can be positively impacted by Kenny's work in diversity, equity and inclusion," Karen Aroesty, regional director of the Anti-Defamation League, said in a county news release obtained by 5 On Your Side Tuesday night.

Murdoch previously worked in the Office of Diversity Equity and Inclusion as the manager of the implicit bias training program. Before that, he oversaw the county’s equity plan in the Office Strategy and Innovation. He is also the Vice President of the St. Louis County NAACP and is a certified bias management trainer by the Anti-Defamation League.

PREVIOUS STORY: 'It was a missed opportunity' | Some area leaders not happy about choice for county executive