"We are a very patriotic community and we promote patriotism and I believe this is a national motto that does that, speaks volumes about our community." 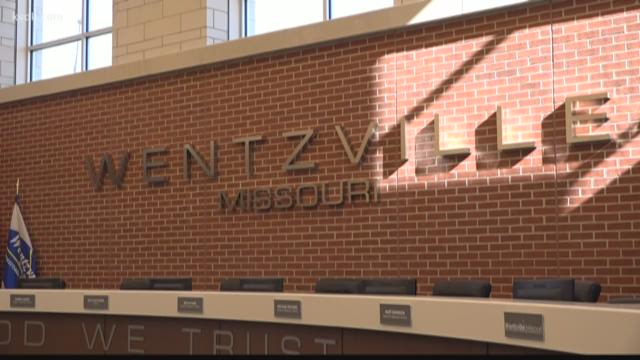 WENTZVILLE, Mo. – In large letters, across the front of the Wentzville Board of Alderman Chambers, reads the familiar phrase – “In God We Trust.”

The alderman unanimously voted to install the motto when building the new city hall, but now it’s coming under criticism.

City leaders said the motto was installed using private funding and contractors and while a majority of residents we spoke to are in favor of the phrase, that didn’t include everyone.

“We are a country made up of many different religions,” said John Wittenauer, a patron at Duke’s BBQ Shack.

“It’s what I believe in, it’s what I live by. I think it’s quite appropriate,” said Jan Cantu, a resident of Wentzville.

Cantu said the phrase has tremendous power to her, personally.

“I think it’s quite appropriate,” she said.

Wittenauer sees it as issue with the First Ammendement.

The new Wentzville City Hall opened in November 2017. Mayor Nick Guccione said the motto was part of the plan from the very beginning.

“We made a very conscious decision to include it in our new city hall, I’m very proud of it personally,” said Guccione.

He said, despite the word ‘God,’ this has less to do with church and more to do with state.

“We are a very patriotic community and we promote patriotism and I believe this is a national motto that does that, speaks volumes about our community,” he said.

Guccione also believes, the phrase is far too common to be that controversial.

“Legal tender has In God We Trust on it, so if they would have a problem with that, I would like to collect the legal tender to give to nonprofits in the community,” he said.

The Mayor said he has no plans to remove the motto.

He said they checked with several legal sources before they installed the display. Due to the fact it was purchased by the Kiwanis Club of west St. Charles County, the move is perfectly legal