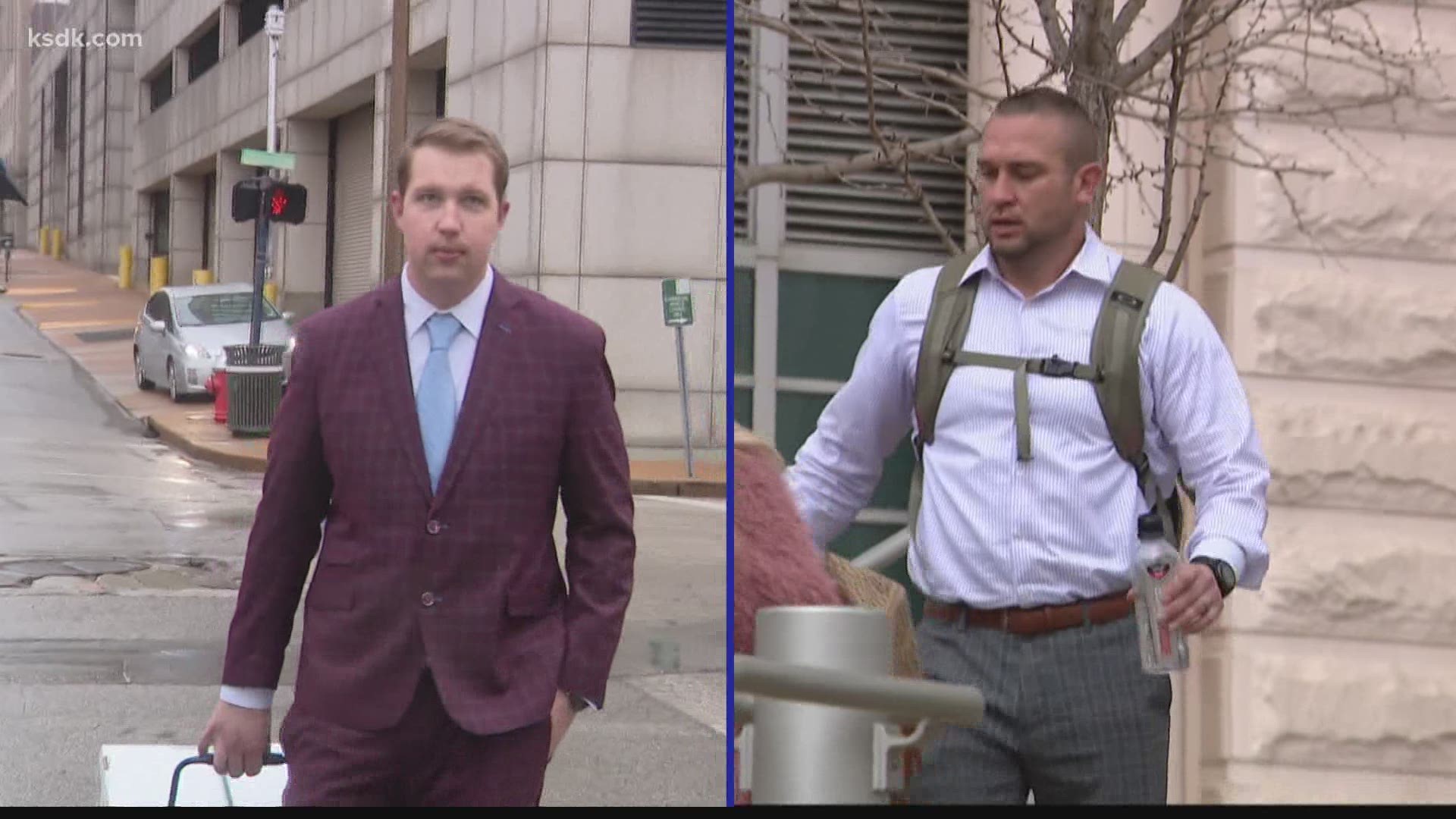 And did he do so knowing it could have captured the moments that undercover colleague was assaulted by his fellow officers and there could be an investigation into the matter?

Did former St. Louis Officer Dustin Boone know he was participating in an unlawful arrest when he deprived that same undercover colleague of his civil rights by holding him down during said arrest?

These are questions a jury is now weighing to determine whether to send Myers and Boone to prison for their alleged roles in the assault of Detective Luther Hall in 2017. Hall was working undercover as a protester in September 2017.

Boone is charged with aiding and abetting in the deprivation of Hall's civil rights, which carries a sentence of up to 10 years in prison.

Myers is charged with tampering with evidence to impede a federal investigation for allegedly destroying Hall’s cellphone. He’s facing up to 20 years in prison.

This is the second time these officers are on trial for those charges, and the second time an all-white jury has been seated to determine their fates in a case prosecutors say has racial undertones.

Boone and Myers are white. Hall is Black.

A jury acquitted Myers of the deprivation of civil rights charge in March, but hung on whether he destroyed the phone to impede an investigation.

The jury hung on whether Boone deprived Hall of his civil rights.

Federal prosecutors argued Hall’s cellphone video captured Myers striking the phone with an asp, and text messages Boone sent to family and friends showed he is a racist, admitted to assaulting other people he had arrested, and talked about his desire to assault protesters.

He also sent a lengthy text message to Hall apologizing for his conduct.

In her closing argument Tuesday, First Assistant U.S. Attorney Carrie Costantin pointed to her fingers to emphasize the following points: “He said he was going to do it, he did it, he Facetimed while it was happening, and apologized to Hall after he did it.”

She also said no good, reasonable officer with “minimal training could think for a second that what was happening to Hall” was OK or fell into the department’s use-of-force policy, which requires officers to use the least amount of force possible to gain compliance.

“He could have walked away, but he didn’t,” she said. “He aided and abetted in an assault.”

She continued: “This is not about being pro-police or anti-police. Nobody hates a bad cop than a good cop and that’s because bad cops make good cop’ jobs very hard.”

She tore into the defense’s repeated assertions that the arrest scene at 14th and Olive Boulevard was chaotic and fluid, noting Boone Facetimed with his girlfriend for about an hour that night so she could see what was happening – including Hall’s assault.

“This wasn’t terror, this was entertainment to him,” she said.

Defense attorney Scott Rosenblum reiterated how there were pepper balls being fired on that corner as the assault happened, and officers were coughing and even throwing up because of it. He said morale was low after officers watched their colleagues get injured and property get destroyed for two days prior.

“She wants you to believe this was a quiet Sunday afternoon at Tower Grove Park,” Rosenblum quipped.

He argued a video captured on Hall’s cellphone and a newspaper photographer’s photos did not show Myers destroyed the phone, and, that at the moment the phone was struck, Myers was not near it.

He also focused heavily on how the FBI conducted 120 interviews, and not one person said they saw Myers strike the phone, how every officer who was at the scene that night believed it was a lawful arrest and there was nothing wrong with the use-of-force being used against him.

“Police officers rely on the probable cause of other officers,” Rosenblum said. “They’re not obligated to stop their fellow officers and say, ‘Excuse me sir, what grounds do you have for this arrest?’”

He called the government’s case against his client nothing more than speculation about the moments not captured on Hall’s cellphone or in the photographs.

“You cannot speculate your way into a conviction,” he said.

He then told the jury they are this country’s only way to protect people, including themselves and their own families, from overreaching government investigations like this one.

Rosenblum pinned most of the blame for the assault -- which left Hall in need of two spinal fusions, a jaw injury, a lip injury and other complications due to drastic weight loss from his inability to eat – on former Officer Randy Hays.

Hays, along with his then girlfriend Officer Bailey Coletta, have already pleaded guilty to their roles in the assault and are awaiting sentencing.

Boone’s attorney, Patrick Kilgore, also said during his closing argument that his client was not near Hall at the precise moment Hall was being struck, and walked the jury through photos that broke it down.

He, too, said not a single person the FBI interviewed said Boone assaulted Hall.

He said he did not have an explanation for Boone’s text messages and called them “racist and vile.”

“Those text messages are horrible, and they are vile, but there is no instruction you will receive from this court that you are to find Dustin Boone guilty of this offense because of those text messages,” he said. “This is not a hate crime.

“Those texts are meant to inflame you.”

Costantin got the final word Tuesday, as is customary for the government.

“The texts are not to inflame you, but to inform you as to what's going on in the minds of both Myers and Boone and what he's thinking when he sees Hall standing there, who he thinks is just a Black protester,” she said.

She told the jury to remember how he texted his girlfriend not to talk about Hall’s arrest, and suggested he was scared of getting in trouble.

"It was kind of fun when it was just a protester,” she said. “But it's not fun anymore because he can't just claim it was a protester, and that story about how he was resisting arrest is not gonna fly.”