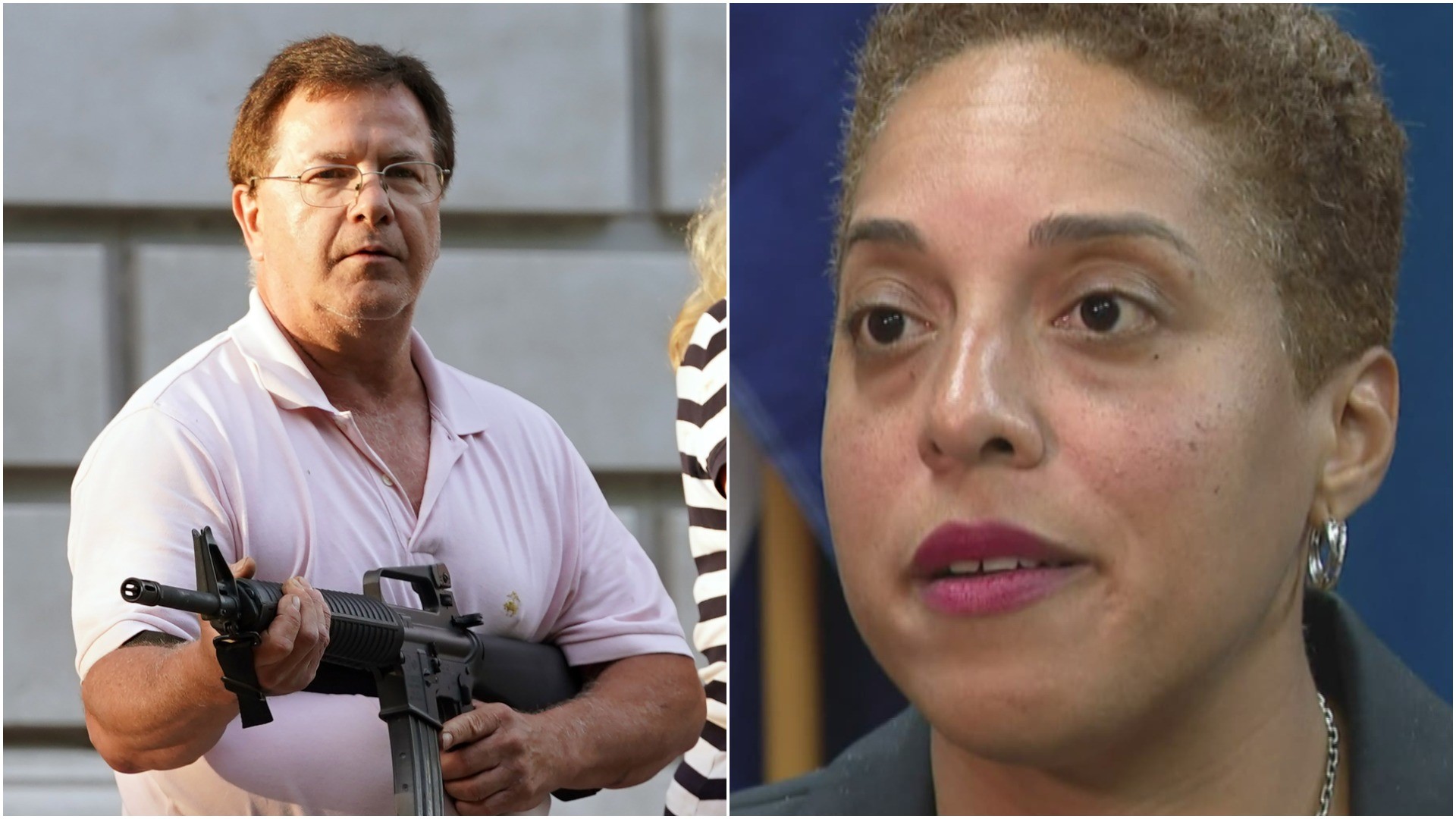 ST. LOUIS — A St. Louis judge has disqualified Circuit Attorney Kimberly Gardner and her office from prosecuting Mark McCloskey's case, saying campaign fundraising emails she sent before and after issuing charges against the couple “raise the appearance of impropriety and jeopardize the defendant’s right to a fair trial.”

Judge Thomas Clark’s ruling comes about six weeks after the attorneys for Mark and Patricia McCloskey argued their motion to disqualify Gardner and her office from the case, saying her emailed solicitations for campaign contributions demonstrated she and her office have a personal interest in the case and jeopardized Mark McCloskeys’ right to a fair trial.

In her rebuttal, Gardner argued she sent the emails merely to respond to criticisms from the governor and president.

But, in his 22-page ruling, Clark disagreed.

“Ms. Gardner has every right to rebut criticism, but it appears unnecessary to stigmatize defendant – or even mention him – in campaign solicitations, especially when she purports to be responding to others,” he wrote. “In fact, the case law and Rules of Professional Conduct prohibit it.”

“(Gardner) is accountable – not just to the voters, but to the rule of law,” Clark wrote. “The court is similarly obligated to follow the law…

“These email solicitations aim to raise money using the defendant and the circumstances surrounding the case to rally Ms. Gardner’s political base and fuel contributions.”

In his ruling, Clark also notes how rare it is for judges to dismiss local elected prosecutors from cases.

“The court is acutely aware and recognizes the significance of the string of supreme court case law, discouraging judicial intrusion,” he wrote. “This court does not seek to disregard the will of the voters and does not make this decision lightly.”

Gardner issued a statement, which read: "Today the media reported on a judge’s ruling on the Mark McCloskey case prior to any official notification. We will review the court order and determine our options."

"All they want is fairness," he said.

The McCloskeys made international headlines and widespread support from right-wing politicians as high as President Donald Trump after photos of them pointing guns at protesters June 28 in front of their Central West End home went viral. Missouri’s Republican Gov. Mike Parson has offered to pardon the McCloskeys should they be found guilty of a crime, saying the state’s Castle Doctrine allows people to use lethal force to protect their private property.

Missouri Attorney General Eric Schmitt filed a briefing after Gardner filed charges against the McCloskeys seeking to dismiss the charges, saying the charges threatened the state's laws regarding the right to bear arms.

In selecting special prosecutors, judges often turn to the state's attorney general. But, given Schmitt's intervention in the case, it's unclear whether his office could be selected.

Clark's ruling also does not apply to Patricia McCloskey's case. She is scheduled to appear before Judge Michael Stelzer Jan. 15, 2021.

Stelzer is expected to replace Judge Rex Burlison as the presiding judge at the end of this year.

Schwartz said he plans to file a "judicial notice" to Stelzer, asking him to review Clark's ruling and join it.

In the campaign emails in question, Gardner mentions the president and governor’s criticisms, accusing them of “fighting for the two who pointed guns at citizens during the Black Lives Matter protests.” One of the emails was sent 48 hours after she announced she was charging the couple. She raised more than $17,000 between July 17 and July 23, which is when the emails were sent.

In his ruling, Clark notes Gardner’s prosecutors and police referred to the event in front of the McCloskey’s home as “a protest march” – not a Black Lives Matter event.

The protesters were headed to Mayor Lyda Krewson’s house after she read the names and addresses of people who wrote to her during a livestream from her office saying they did not want her to close one of the jails known as The Workhouse.

In her response to Mark McCloskeys' motion to disqualify her, Gardner argues “not a single word in either campaign email (indicates) whether she would prosecute the defendants and how she might pursue an outcome in that case.” She argued the emails were intended to “fight back against the unprecedented level of verbal attacks from prominent Republicans and right wing media…”

“If this is so, why mention defendants?” Clark wrote. “…If responding to her critics was the intent of the campaign solicitations, it seems reasonable that she would focus on them, not the defendants.

“This email language extends beyond campaign rhetoric. Rather, it seeks to seemingly energize supporters to contribute by referencing defendant, his conduct and even his social status…The twin fundraising solicitations paint defendant as a wealthy elitist and perhaps worse.”

Clark cited the July 17 email in which Gardner references the McCloskey home as a “mansion.” In a July 22 email, Gardner references her efforts to “stand up against a system that elevates the privileged and powerful,” and hold offenders “accountable.”

“Like a needle pulling thread, she links the defendant and his conduct to her critics,” Clark wrote. “…To a reasonable person, this language forecasts prosecutorial action.”

Clark also relied heavily on a Vermont Supreme Court case in which a local judge removed an elected prosecutor from a murder case after the prosecutor promised in campaign literature to vigorously prosecute the defendant in a retrial should he be re-elected.

In that case, the court ruled, “the awesome power to prosecute ought never to be manipulated for personal or political profit.”

Read the full ruling from the judge below:

This isn’t the first time a local judge has dismissed Gardner from a case.

And Clark also notes it in his ruling.

In 2018, Gardner’s office was prosecuting someone who was accused of threatening a police officer during an officer-involved shooting. But Gardner’s office also was investigating the officer’s conduct during the confrontation, so his attorneys argued she should be dismissed from the case due to an “appearance of impropriety.”

Judge Timothy Boyer agreed, but the Missouri Supreme Court reversed Boyer's ruling and reinstated Gardner on the case, saying the “appearance of impropriety test” was misapplied to the officer instead of the criminal defendant, who specifically has the constitutional right to a fair trial, according to Clark’s ruling.

In other words, it’s the defendant who needs to do the asking should their right to a fair trial be in jeopardy.

The state supreme court also cautioned disqualifying a local prosecutor “circumvents the voters’ choice,” and only in “rare circumstances should a circuit court interfere with the democratic process and override the voters’ choice as to who is best suited to represent the interests of the people as prosecuting attorney.”

“Likewise, campaigning without tainting the right to a fair trial is equally compelling and constitutionally sacred,” Clark wrote. “…In short, the Circuit Attorney’s conduct raises the appearance that she initiated a criminal prosecution for political purposes.”

He also wrote assigning one of Gardner’s prosecutors to the case and solely excluding her would still put Mark McCloskey’s right to a fair trial in jeopardy.

“Any attorney in the office handling this prosecution would be subject to her ultimate supervision,” he wrote. “This is a high profile case, receiving extensive media coverage, eliminating any possibility that any assistant circuit attorney is unaware of Ms. Gardner’s incipient interest, initial involvement and advocacy on this matter.”